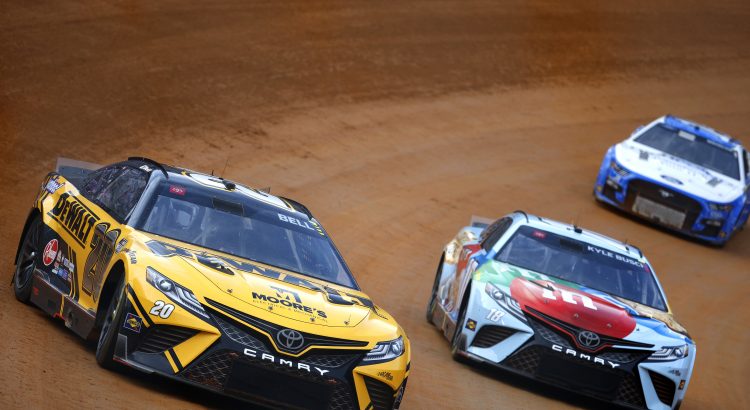 The NASCAR Cup Series will go play in the dirt Sunday night. This race was just as predictable as Talladega last year. Most of the “Dirt Track Experts” wrecked each other early in the race and this allowed some of the drivers with little dirt track racing experience (Joey Logano, Martin Truex Jr. and Daniel Suarez) to finish up front. Will the same scenario play out this year? It could, but I expect the drivers who are the favorites to be much better in the 2022 edition of the Bristol Dirt Race.

PRACTICE SPEEDS FOR THE BRISTOL

The Cup Series had two 50 minute practices sessions Friday. That is a lot more time than the teams are used to on track for practice. NASCAR gave the teams this extra time so they could watch the track and help prepare it for the race Sunday. It is important to check out the practice speeds before any race, but this week it is also important to check out how the drivers ran in the heat races. I will be basing my picks on the driver’s performance in the heat races but I will not ignore the practice speeds.

Here are the practice speeds from Friday’s practice sessions… 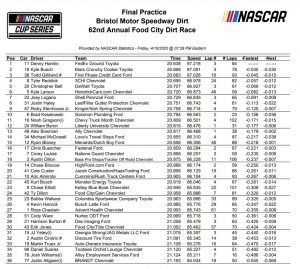 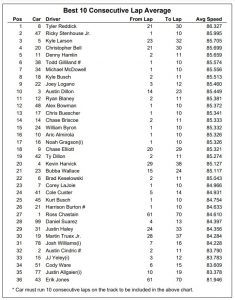 Bristol Motor Speedway is a short track but this is not your normal race in Thunder Valley. The concrete races at Bristol have 500 laps. The race Sunday night is scheduled for 250 laps (125 miles). That means there are 62.5 points available for leading laps and 112.5 points available for leading laps. Martin Truex Jr. led 126 laps and scored 39 fastest laps in the race (49.05 dominator points). Joey Logano was the second dominator. The No. 22 car led 61 laps and scored 20 fastest laps (24.25 dominator points). Passing was difficult on the dirt last year so I expect this to be a one dominator race with one sub-dominator. It will be important to pay up for the driver we think can lead the most laps Sunday night. 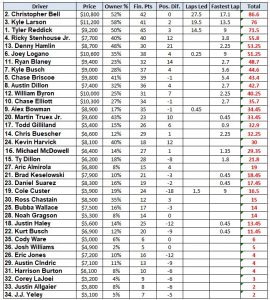 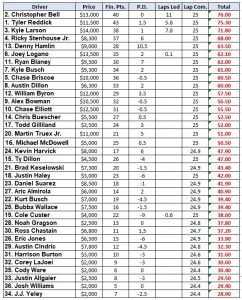 KYLE LARSON (DK $11.2K FD $14K): Larson is the best dirt track racer on the planet. He has won everything in the dirt racing series, except the Bristol Dirt Race. It bothers him too. He desperately wants to check this box. Larson posted the sixth-fastest lap in practice and qualified fifth in the heat races. Larson should have a good chance to win Sunday night.

CHRISTOPHER BELL (DK $10.8K FD $13K): Bell is the best dirt track racer in the field not named Kyle Larson. He was working his way through the field last year with Larson when the two drivers were wrecked by Ross Chastain. If Bell can stay out of trouble, he should have a good chance to win Sunday night.

JOEY LOGANO (DK $10.6K FD $13.5K): Logano surprised everyone when he went to Victory Lane in the Bristol Dirt Race last year. He started 10th and led 61 laps on his way the win. Was last year’s race a fluke? Logano competed in the Truck Series race Saturday night and finished sixth. I will take a chance with Logano Sunday night.

CHASE ELLIOTT (DK $10.3K FD $12.5K): Elliott will get some extra seat time this weekend since he will be competing in the Truck Series race. Elliott said he has been working hard on his dirt track racing skills. Elliott was horrible in practice so I am hoping that scares some people away from him. Elliot looked good in his heat race. Elliott should have a good chance to finish in the top-10.

WILLIAM BYRON (DK $10K FD $12K): Do you believe in momentum? If so, Byron is your driver Sunday night. He won at Atlanta and Martinsville and finished 3rd at Richmond. Now we get to see what Liberty Bill can do at Bristol on dirt. He started 8th and finished 6th in this race last year. He qualified 19th in the heat races. Byron will have a good chance to score place differential points Sunday night.

CHASE BRISCOE (DK $9.8K FD $10K): Briscoe has a background in dirt track racing, similar to Tony Stewart. He only finished 20th in this race last year but that finish is misleading. Briscoe was making his way to the front of the field when his teammate (Kevin Harvick) wrecked him. Briscoe has been fast this year and he should have a good chance to finish in the top-10.

MARTIN TRUEX JR. (DK $9.6K FD $11K): Truex won the Truck Series race at Bristol in the dirt last year. He came back to the track the next day and dominated the Cup Series race. Truex led 126 laps and scored 17 Stage Points. Can he do it again? Truex looked horrible in practice and he was not much better in practice. He starts 30th and should have a good chance to move up 10-15 spots Sunday night.

KYLE BUSCH (DK $9K FD $9.3K): Martin Truex Jr. dominated the Bristol Dirt Race last year. So, could Busch do the same thing in a Joe Gibbs Racing car Sunday night? Maybe. Some people in the garage say that the Bristol Dirt track races like a concrete track after the dirt is packed down after 100 laps. If that is so, Busch should be a good pick. He is the best driver in the field at Bristol on dirt. He was running well last year until the mud clogged his radiator. Busch likes adding races he has not won at to his Hall of Fame resume. He has not won at Bristol on dirt, so I expect he will be extra motivated this week.

DENNY HAMLIN (DK $8.7K FD $9K): Hamlin finished third in the Bristol Dirt Track Race last year and he looks fast again this week. Hamlin posted the fastest speed in practice and he had the fifth –fastest long run speed. He got pushed up the track in his heat race and it looked like Hamlin just gave up so he could save his car for the main event. The No. 11 car starts 34th. Hamlin should score the most place differential points Sunday night.

RICKY STENHOUSE JR. (DK $7.7K FD $8.3K): Stenhouse started 13th and finished 2nd in the Bristol Dirt Race last year. That should not have surprised anyone. He has a background in dirt track racing and he has had a lot of success. He should be fast enough to finish in the top-10 again Sunday night.

AUSTIN DILLON (DK $7,4K FD $6.3K):  Dillon should be a good value pick Sunday night. He has a background in dirt track racing and Dillon has had some success in NASCAR on dirt. Dillon won the 2013 Truck Series race at Eldora and he finished in the top-10 in his other two races at the track. He should have a good chance to finish in the top-10 Sunday night.

MICHAEL MCDOWELL ($6.4K FD $5K:  McDowell had a good race last year at Bristol on the dirt. He started 16th and finished 12th. His car looks fast again this week. McDowell posted the 14th fastest speed with the seventh-fastest long run speed. I will take a chance with McDowell in a few lineups Sunday night.

JUSTIN HALEY ($5.6K FD $3K): Haley has been working on his dirt track racing skills. It showed this week. Haley posted the eighth-fastest speed in practice and he looked like he was shot out of cannon in his Heat Race. Haley ran away from the field and now he starts seventh Sunday. Haley is a risky pick since he starts in the top-10, but I will take a chance with Haley in a few Tournament Contest lineups.

NOAH GRAGSON ($5.3K FD $2.5K):  Gragson was not on my radar before practice but it is tough to ignore the speed the No. 16 car had in practice. Gragson posted the 11th fastest lap with the 17th-fastest long run speed. I am not going to go crazy with Gragson Sunday night, but I will have him in a few lineups. 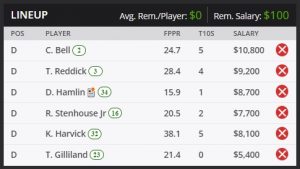 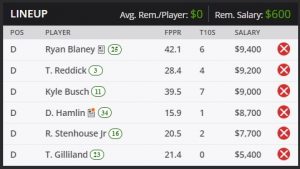 * I really like Kyle Larson and Christopher Bell Sunday night but they are going to be the two highest-owned drivers. I will pivot to Tyler Reddick and hope this race turns into a one-dominator race like the Truck Series race was. Kyle Busch, Denny Hamlin and Ryan Blaney should come to life once the track dries out. Ricky Stenhouse Jr. is a safe driver with top-five upside. Todd Gilliland had a lot of speed in practice. He should be low owned too. 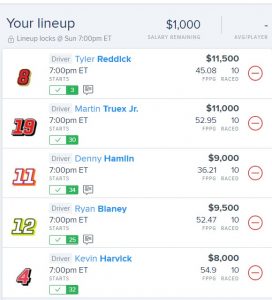 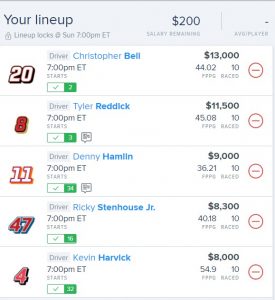