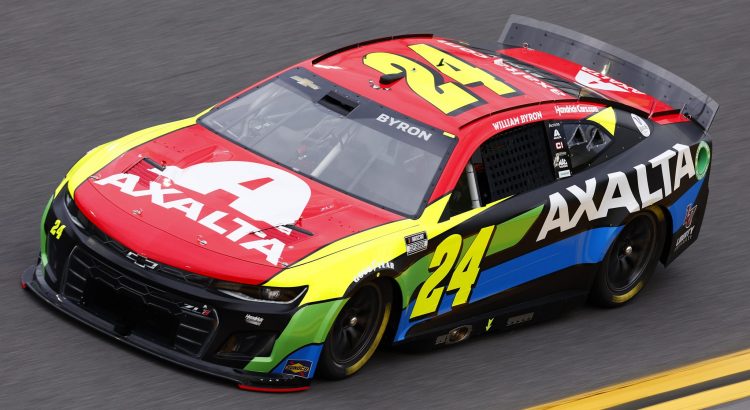 The NASCAR Cup Series will try to slay the “Miles the Monster” this week when they compete at Dover International Speedway. Have you had a hard time winning some cash in your DFS contest over the last two weeks? Don’t worry; the race at Dover is easier to predict then the races at the Bristol Dirt Track or at Talladega. The DuraMAX Drydene 400 can be seen Sunday at 3 pm ET on FS1.

NASCAR gave the Cup Series teams 20 minutes to shake down their cars in practice. The teams needed a lot more time to figure out the Gen-7 car in the concrete track. Both groups had drivers spin out within the first five minutes of practice. William Byron, Harrison Burton, Tyler Reddick, Michael McDowell and Josh Bilicki all got into the wall. NASCAR spent a lot of time cleaning up the track so we probably will not learn too much from the practice. I am not going to ignore the speeds though. Here are the speeds from Saturday’s practice session… 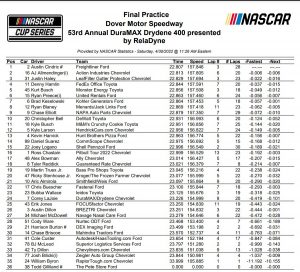 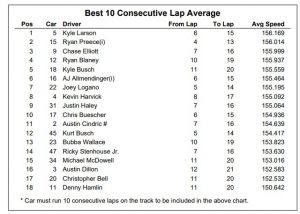 Dover is a rhythm racetrack. There are a few drivers who have long streaks of top-10 finishes at the “Monster Mile” because they understand how to do the dance on the gas pedal and the brakes in order to turn fast laps at the track. Here are the drivers who have scored the most points in DFS contests at Dover over the last three years… 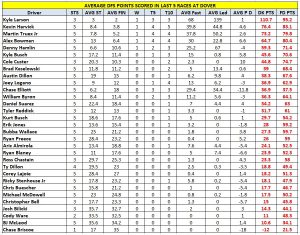 Here are the drivers I expect will have the best chance to dominate the race Sunday: Kyle Larson, Chase Elliott, Alex Bowman, Denny Hamlin, Ryan Blaney and Chris Buescher 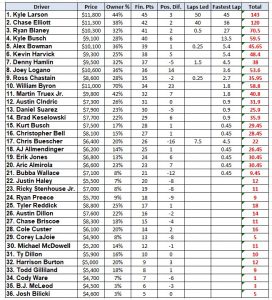 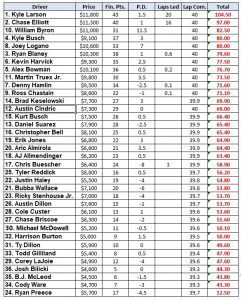 KYLE LARSON (DK $11.8K FD $14K): Dover has been the best track for Larson. He has an average finishing position of 2nd at the Monster Mile since 2018. He has also averaged 140 laps led in those races. Larson should have a good chance to lead some more laps Sunday. The No. 5 car was the fastest in practice on the long runs and Larson qualified 3rd for the race. Larson will be one of my dominators Sunday.

CHASE ELLIOTT (DK $11.3K FD $13.5K): Elliott is the only driver from Hendrick Motorsports who has not won a race in 2022. That could change Sunday. Elliott won at Dover in 2018 and he finished 3rd last year. Elliott posted the 9th-fastest speed in practice with the 3rd-fastest long run speed. Elliott qualified 4th for the race. The No. 9 car should be a good pivot from Larson Sunday or you can just pay up and play both drivers.

WILLIAM BYRON (DK $11K FD $13K): Byron barely made a lap in practice before he crashed the No. 24 car. As a result, Byron will start 33rd Sunday. This makes Byron a lock for all Cash Contests and he should be owned in at least 70% of your Tournament Contests. I will fade him in 30% of my lineups to get another dominator in the race. If three drivers lead 100 laps, they will have more value than Byron starting from the back, but that is not how I expect this race to play out.

JOEY LOGANO (DK $10.6K FD $11K): Logano has never won at Dover and he has only led 31 laps in the last 5 races at the track, but he is a good choice if you are looking for a safe driver to finish in the top-10 Sunday. Logano has finished 5 of the last 6 races at Dover in the top 10. I like Logano more for Cash Contests this week because he will score a lot of place differential points but likely will not score many dominator points.

RYAN BLANEY (DK $10.3K FD $12K): What should we do with Blaney this week? Dover is his worst track. He only has one finish in the top-10 at the Monster Mile since 2016. Blaney has been the fastest driver in most of the races this year and he looks fast again. Blaney posted the 8th fastest speed in practice with the 4th fastest long run speed. Blaney starts 5th and should have a good chance to get to the front and lead some laps. I will have a few shares of Blaney Sunday.

MARTIN TRUEX JR. (DK $9.8K FD $11.5K): Truex was the most dominant driver on the tracks under 1.5-miles in length in the previous car. He has not been as good this year and he did not look great in practice. Truex posted the 19th fastest speed in practice and the No. 19 car qualified 18th for the race. I have seen Truex struggle before in practice and show up with speed in the race. He should score 8-10 place differential points and Truex has a slim chance to lead some laps.

KYLE BUSCH (DK $9.1K FD $12K): Joe Gibbs Racing has had a lot of success at Dover and if they are going to have success Sunday it may come from the No. 18 car. Busch has been the most consistent driver for JGR this year. He has been hit or miss at Dover over the last three seasons, but I doubt his ownership will be too high. It is never a bad idea to take a chance with Busch if most people will not have him in their lineups.

DENNY HAMLIN (DK $9.5K FD $10.5K): It has been tough to trust Hamlin this year. His average finishing position is a ridiculous 22.6. Hamlin only has one top-10 finish this year and it was his win at Richmond. Hamlin’s struggles this season should result in lower ownership this week. Hamlin posted the 4th-fastest speed in practice and he starts on the front row. Hamlin could score a lot of points if he can get the early lead from Chris Buescher. Hamlin will be one of my pivots from the highly owned Hendrick Motorsports drivers.

KEVIN HARVICK (DK $9.3K FD $10K): Could this be the week when Harvick ends his 55 race winless streak? His last win was at Bristol in 2020. That is another high-banked, concrete track. Harvick said after practice on SiriusXM NASCAR Radio, “The car was a bit loose in qualifying but it is the best car we have had in race trim this year.” Sounds good to me. I will have some shares of Harvick Sunday.

TYLER REDDICK (DK $8.8K FD $8.8K): The name most drivers do not want to be labled with is “Best driver to never win a Cup Series race.” That is what most people are saying about Reddick right now and they are right. His time is coming but I doubt it happens this week. The No. 8 car looked horrible in practice. That should keep his ownership low. If they can fix up the car, Reddick should score a lot of place differential points from the 26th starting spot.

ROSS CHASTAIN (DK $8.6K FD $9K): Let’s be real…. The No. 1 car is one of the fastest in the Cup Series this year. If the name “Kyle Larson” was on the windshield, Chastain would be the highest priced driver in DFS contests. I will take the discount and play the driver who won last week, led 83 laps at the high-banked intermediate track in Las Vegas and leads the Cup Series in DFS Points scored on the intermediate tracks this year. Chastain has a chance to lead some laps Sunday and be one of the dominators in the race.

DANIEL SUAREZ (DK $7.9K FD $7.2K): Who is the driver who has scored the most dominator points over the last two races. If you said Suarez, you would be right. He led the 64 laps at Bristol and 28 laps at Talladega. I know those races do not translate into speed at Dover, but it shows he can get to the front and hold a lead. Suarez finished 9th at Dover last year. His No. 99 Trackhouse Racing Chevy has a lot more speed than it had in 2021. Suarez is a good value pick Sunday.

ARIC ALMIROLA (DK $6.6K FD $6K): Almirola looked bad in qualifying but that is nothing new for him. He usually races better than he qualifies. Almirola starts 27th Sunday and he posted the 21st fastest speed in practice. Almirola finished 6 of his 7 races in a Stewart-Haas Racing car in the top-17 at Dover. He will score at least 36 DK points if he can finish 17th Sunday.

CHRIS BUESCHER (DK $6.4K FD $6K): Buescher was not on my radar for this race and then he went out and won the pole. I am not sure where that speed came from because Buescher was only 22nd fastest in practice. He is almost guaranteed to score negative place differential points, but there is also a good chance he could lead a lot of laps. Dover is the toughest track to make a pass at. If he can take an early lead, he could lead most of the laps in Stage 1. I will like Buescher less if NASCAR announces there will be a competition caution early in the race.

AJ ALLMENDINGER ($6.2K FD $3.5K): Allmendinger will be behind the wheel of the No. 16 car for Kaulig Racing this week. Allmendinger has driven this car in four races this year and he has yet to finish inside the top-20. His poor races had a lot more to do with bad luck than the lack of speed. Allmendinger posted the 2nd fastest speed in practice with the 6th fastest long run speed. Allmendinger starts 19th Sunday and should be able to score a few place differential points.

COLE CUSTER (DK $6.1K FD $4.5K): Custer is my favorite value pick this week. Dover is his best track. He has competed in three Cup Series races at the Monster Mile. Custer finished 10th, 10th and 11th in those races. Custer has not been very good this year (He has an average finishing position of 22.2) and he did not look good in practice. I went back and looked at the last time the Cup Series had practice at Dover last year. Custer was 24th fastest and finished 10th in the race. He should score a lot of place differential points from the 31st starting position. 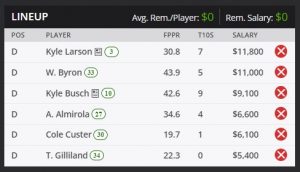 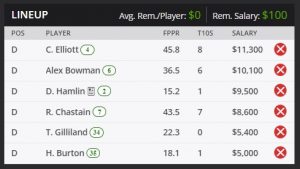 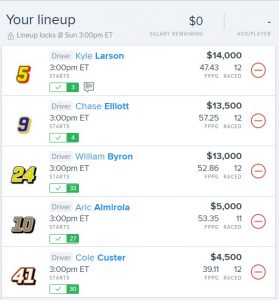 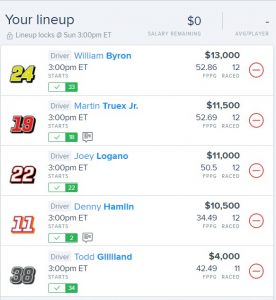