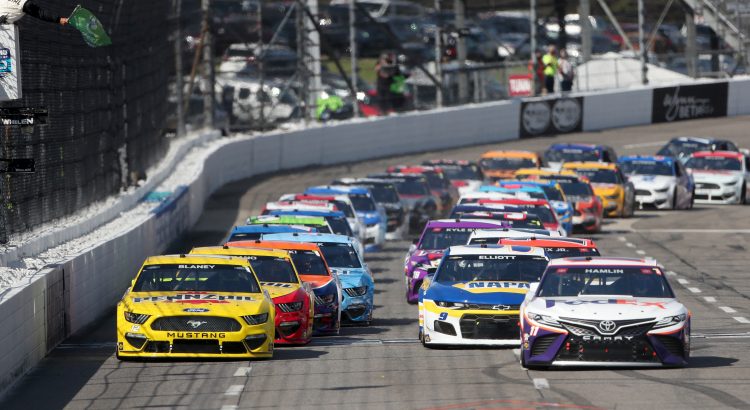 The NASCAR Cup Series travels back to Martinsville Raceway Sunday for the final race in the Round of Eight. Kyle Larson won both races in this round of the playoffs so there are still three spots up for grabs in the Championship Four at Phoenix. The seven drivers who are still competing for the championship all have a history of running well at Martinsville. It should be fun to see who can win the race this week. The Xfinity 500 can be seen Sunday at 2 p.m. on NBCSN. 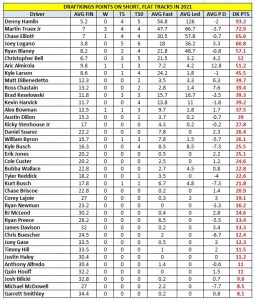 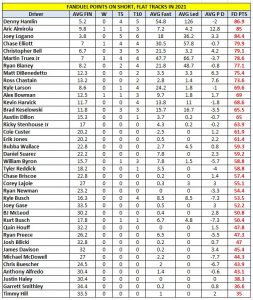 The Xfinity 500 is scheduled for 500 laps (263 miles). That means there are 125 points available for leading laps and 225 points available for fastest laps. That is the most dominator points this season and we must pay up for the top drivers so we will have a good chance to score these dominator points. We will not win our contests without the drivers who lead the most laps in our lineup. This is a good race to use a “Stars and Scrubs” strategy.

One more thing to consider… There is nowhere to hide at Martinsville. If the playoff drivers get too aggressive up front, they could spin each other out. That could cause a Talladega Style wreck and take out most of the top cars. I have won a lot of money in some races at Martinsville because I faded the top drivers and used drivers who start further back in the field. When the top drivers crashed, I cashed. It would not be a bad idea to build a lineup using drivers like Alex Bowman, William Byron, Tyler Reddick, Bubba Wallace and Ryan Newman just in case the “Big One” happens Sunday. (Only use this strategy if you are playing multiple contests) 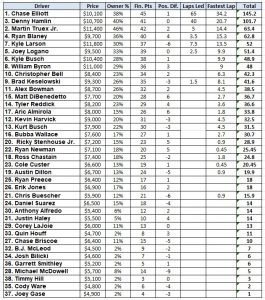 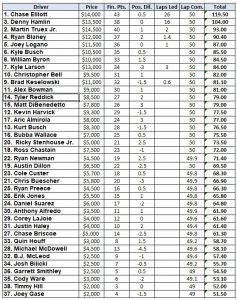 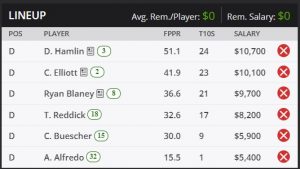 Denny Hamlin ($10,700) will be my top driver for my Cash Contest lineup. Most people will use Martin Truex Jr., but I like Hamlin better. He has scored the most points on the short, flat tracks this season and he leads the Cup Series with five wins at Martinsville. Hamlin is 32 points above the transfer position to the Championship Four at Phoenix. He will likely clinch a spot if he finishes in the top-five in Stage 1. Then the No. 11 team can use a strategy to get track position to win the race.

Chase Elliott ($10,100) will be my second dominator for my Cash Contest lineup. He is in the same situation as Denny Hamlin. Elliott simply needs to finish in the top-five in Stage 1 and then he can go for the win. Elliott won this race last year and he finished second at Martinsville in April. He is my pick to win Sunday.

Ryan Blaney ($9,700) is a great pick for under $10K. Martin Truex Jr. gets all of the hype at Martinsville but Blaney has been nearly as good as Truex. Blaney finished second in both races at Martinsville last year. He come back to the track in April and won both Stages and led a race-high 157 laps. There is a good chance Blaney is the top dominator Sunday if the No. 12 team brings the same speed to the track.

Tyler Reddick ($8,200) will be my value pick for my Cash Contest lineup. He starts 18th and Reddick should have a good chance to finish in the top-10. He was on fire in the playoffs before the race last week at Kansas. Reddick finished 9th, 2nd and 6th in his previous three races before his poor performance last week. I look for the No. 8 team to bounce back at Martinsville. He finished 8th at Martinsville in April. I will take another top-10 finish from him this week.

Chris Buescher ($5,900) seems to be miss-priced on DraftKings. I know he is a risky play from the 15th starting position but his average finishing position on the short, flat tracks this year is 15th. He started 15th and finished 13th at Martinsville in April. He scored 32 DK Points in that race. He will have a decent chance to score 30+ DK Points this week.

Anthony Alfredo ($5,400) will be my “punt play” in my Cash Contests. Alfredo starts 32nd so there is little risk in playing him Sunday. He started 35th and finished 26th at Martinsville in April (Alfredo scored 25 DK Points in that race). I will take 25 DK Points from Fast Pasta Sunday. 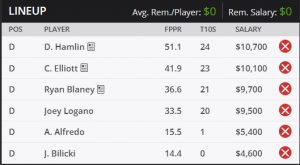 Denny Hamlin ($10,700) will be my top dominator for my Tournament Contest. I am going to squeeze four dominators into this lineup (Chase Elliott, Ryan Blaney, Joey Logano and Hamlin) and hope Kyle Larson or Martin Truex Jr. do not ruin the party. These four drivers have led 1,721 laps in the 750 HP aero package at Martinsville. Hamlin led 276 laps in the April race at Martinsville. I will take a chance that he can do it again Sunday.

Chase Elliott ($10,100) is no stranger to dominating races at Martinsville. He led 236 laps in this race last year. I really like what Hendrick Motorsports has going on right now. Elliott is their best driver at Martinsville, so he gets a spot in my lineup.

Ryan Blaney ($9,700) will be my third dominator for my Tournament Contest lineup. Why not play the driver who dominated the last race at Martinsville. Blaney led almost every statistical category at Martinsville in April. I will use him Sunday and hope he can 157 laps like he did in April.

Joey Logano ($9,500) will be my fourth dominator for my Tournament Contest lineup. I like Logano a lot more for DFS than I do for season-long leagues this week because the No. 22 team doesn’t care about Stage Points. Logano needs a win to advance to Phoenix so they will use an aggressive strategy to get Logano to the front. It worked in 2018. It could work again Sunday.

Anthony Alfredo ($5,400) should be a safe pick from the 32nd starting spot. There are going to be wrecks in this race. I just need Alfredo to avoid them and he should end up inside the top-25. That is what he did in April when he started 35th and finished 26th at Martinsville. 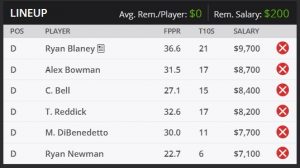 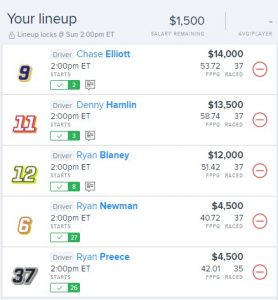 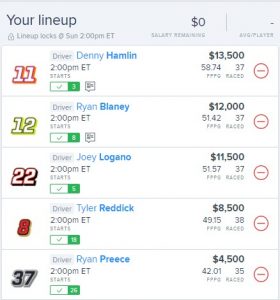