There is a new tournament on the schedule this year. The golfers will travel across the southern border to play in the Mexico Open. This tournament is like the U.S. Open for Mexico. The PGA Tour is no stranger to Mexico. They have played in the WGC-Mexico Championship before, but this tournament will be played at a new course in Vallarta, Mexico (Instead of the high elevation of Mexico City like the WGC event was played at). It should be interesting to see how this new course plays with the professional golfers.

The field is not very deep this week. Jon Rahm, Abraham Ancer, Tony Finau and Gary Woodland are the big name golfers in the field. This tournament will not be very good for DFS contests since it will be the four golfers listed above and a bunch a scrubs who could all play well or duff it around the course. If you get excited about the Corales Puntacana Championship, then you should love this tournament. If not, it will likely be tough to watch.

The tournament will be played at the Greg Norman Signature course at Vidanta Vallarta Resort. This is a new course that just opened in 2016. It is located between the Ameca River and the Sierra Madre Mountains. The course plays as a par-73 for members, but two of the par-5s have been converted to par-4s to make the course a par-71 for the field this week. The course will play 7,465 yards in length and the grass in the fairways and greens will be paspalum (not a type of grass the PGA Tour usually sees on its schedule). This grass is “sticky” and it usually does not allow a lot of roll-out on the golfer’s drives.

There is not a lot known about the course so that is going to make handicapping this tournament difficult. When you look at the layout of the course, the golfers should have a lot of long iron shots into the greens. I will be looking at the golfers who are good on approach shots from 175+ yards. The fairways are wide and most golfers will hit their drivers off the tee. For that reason I will also be looking at Shots Gained Off-the-Tee this week.

KEY STATS FOR THE MEXICO OPEN 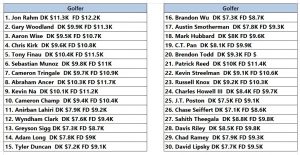 The strategy for building a good Cash Contest lineup is to select golfers who are “safe plays.” That means we need golfers who will make the cut and have a great chance to finish in the top-30. The field this week is made up of high-risk golfers. There are only two or three “safe plays” in the field. For that reason I am not playing any Cash Contests this week. I will play the Cash Contest lineup in a Tournament Contest though.

The strategy for the Tournament Contests this week is to decide if you are going to play Jon Rahm or fade him. He is by far the class of the field but he will also be highly owned. He is going to be 50% owned in Cash Contests and at least 35% owned in Tournament Contests. I will be overweight on Rahm and play him in 50% of my Tournament Contests. I asked myself, “Would you rather have Rahm for $11,300 or Kevin Na at $10,100? I will take Rahm every day when given that choice. I do not like the $8K range, so I will build a lot of “stars and scrubs” lineups this week. 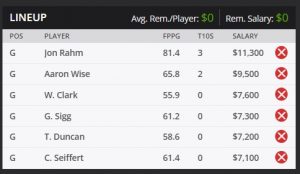 JON RAHM ($11,300): Rahm is going to be highly owned in Cash Contests but he should be. DraftKings could have made Rahm $13K in this crappy field and I would have understood it. He is by far the class of the field. Even if he is not motivated, Rahm should be able to make the cut and post a top-10 finish. If he does struggle, everyone will have him, so it will not hurt your lineup much.

AARON WISE ($9,500): Wise always plays well in these shitty tournaments. He finished 5th in the CJ Cup and 8th at the Shriners Children’s Open this year. The only flaw is Wise’s game is that he is wild off the tee. The fairways this week are very wide so that should not be a problem. He ranks 4th in Shots Gained Approach, so that should line Wise up for a lot of birdie putts this week.

WYNDHAM CLARK ($7,600): I really like Clark this week. He is the second-longest hitter in the field (behind Cameron Champ) and that distance should pay off this week. He always plays well in the resort course tournaments. Clark finished 5th in the Bermuda Championship and 22nd in the Corales Puntacana. I would not be surprised if Clark finished in the top-five Sunday.

GREYSON SIGG ($7,300): Sigg is one of the better young golfers on tour. He has made 8 of his last 9 cuts. His only missed cut was in a loaded field at the Honda Classic. Sigg should have no problem making the cut this week. He is like a younger version of Aaron Wise. His only flaw is his accuracy off the tee. Since that should not be an issue this week, his short game and hot putter should allow Sigg to score well for your DFS lineups.

TYLER DUNCAN ($7,200): I have been playing Duncan a lot over the last month and that is because all he does is make cuts. Duncan finished 12th in his last tournament at the RBC Heritage Classic. His game sets up well for the Mexico Open too. He ranks 16th in Shots Gained Tee-to-Green and 17th in Shots Gained Approach. If his putter gets hot (He ranks 79th in Putting), he could finish in the top-10.

CHASE SEIFFERT ($7,100): Seiffert will be my final golfer in the Cash Contest lineup. He made the cut in the other two resort style tournaments (22nd at the Corales Puntacana and 41st in the Puerto Rico Open). He should be able to make the cut this week and that is about all I need from Seiffert for $7,100. He does rank 10th in the field in Shots Gained Tee-to-Green and 18th in Shots Gained Approach, but it is a small sample size. 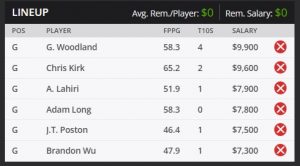 GARY WOODLAN ($9,900): Woodland will be my pivot from the highly owned Jon Rahm. Woodland missed his last cut at the Masters but do not worry about it. That course does not suite his game. Woodland finished 8th at the Valero and 21st at the Valspar last month. He also ranks No. 1 in my Key Stats this week. I would not be surprised if Woodland won the Mexico Open Sunday.

ANIRBAN LAHIRI ($7,900):  Remember last month at the Masters when there was that guy at the top of the leaderboard and everyone thought, “Who is this guy?” That guy is Anirban Lahiri. If he can finish 2nd in the Masters, he should be able to score well at the Mexico Open, right? Lahiri ranks 11th in the key stats. His approach shots and putting are the keys to his game. When Lahiri gets hot, he usually gets really hot. I am hoping he does not drink the water and gets hot this week.

ADAM LONG ($7,800):  My research this week suggests Long should be a great value play this week. He has made 5 of his last 6 cuts so his form is pretty good. Long ranks 5th in the key stats this week. He ranks 17th in Shots Gained Tee-to-Green and 5th in Shots Gained Putting. I will take a “Long-Shot” with him this week… (Come on… I had to write that joke.. LOL)

J.T. POSTON ($7,500):  I am surprised Poston is so cheap this week. Yes he is a shitty golfer, but it is hard to overlook the recent form. Poston finished 3rd in his last tournament at the RBC Heritage. He also ranked 5th when I ran the stats for the golfers on resort courses. He ranked 15th in the key stats, mostly because of his Shots Gained Off-the Tee (15th) and his Shots Gained Putting (23rd). I will use Poston this week and hope he plays like he did at the RBC Heritage.

BRENDON WU ($7,300):  I am not selecting Brendon Wu just because I like saying WUUUUUUUU! I am using him because he is a good young golfer. Wu has made three cuts in a row. That includes a 3rd-place finish at the Puerto Rico Open. That course is similar to what we have this week so his success in Puerto Rico should transfer to Mexico (It’s all Spanish, right?) I doubt he will be highly owned, so I will use Wu this week. 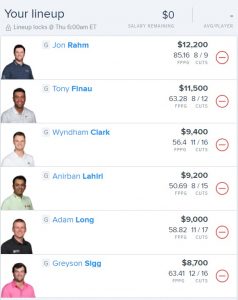 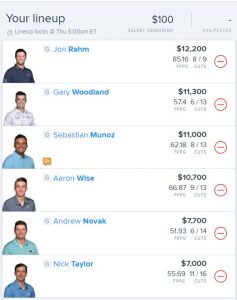 * This is the sixth tournament of Segment 3. We still have the PGA Championship and the Memorial Tournament in this section. I think you can get through those tournaments with the players not entered this week, so fill free to use the best golfers for your lineup at the Mexico Open. No need to save allocations.

** Make sure you save at least one allocation with Jon Rahm for the Memorial Tournament. He dominated that tournament last year before he had to leave because of Covid.