The PGA Tour travels to Monterey, California this week for the AT&T Pebble Beach Pro-Am. The Pro-Am portion of the tournament was canceled last year because of Covid but it will be back this week. I did not mind the amateurs taken out of the field because the TV coverage spends a lot of time on the celebrities and not enough time on the golfers in our DFS lineups. I guess it will be back to watching famous people duff it around one of the most beautiful courses in our country.

Pebble Beach is one of the most iconic courses in golf. It is a par 72 and only plays 6,800 yards in length. There are eight par 4’s that are nearly 400 yards long (very short). The par 5’s are not too difficult either. What makes this course difficult are the tiny greens and the weather. If it is windy and wet, Pebble Beach could be difficult.

Spyglass Hill is the second course in the rotation. It is a par 72 and plays longer than Pebble Beach. It is 7,000 yards in length and plays as the toughest of the three courses. It sits off the coast and most golfers have said they would want to play Spyglass on the difficult weather days because the wind does not come into play as much.

Monterey Peninsula is the third course in play this week. MP is a par 71 which plays 6,958 yards in length. It has four par 5s and five par 3s. We do not see too many courses with five short par 3s. This will make iron accuracy more important this week. Golfers tend to score well on this easy course.

Key Stats for the Pebble Beach 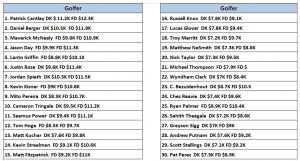 * Daniel Berger is no longer in the field

The AT&T Pebble Beach Pro-Am will have a full field of 156 golfers. All golfers will play three rounds (54 holes) so we can take more chances with golfers in the lower price range since they will get us at least three rounds of points.

My tournament strategy last week was to build my lineups around Jon Rahm. It worked out well. Patrick Cantlay is the top-golfer this week but I also like Daniel Berger, Justin Rose, Jason Day and Maverick McNealy. There is a lot of value in the low $7K range to pair with these higher-priced golfers. I will build a lot of “stars and scrubs” lineups this week so I can have many shares of the golfers priced $9.6K and above (I will have the most shares of Cantlay for the list above). 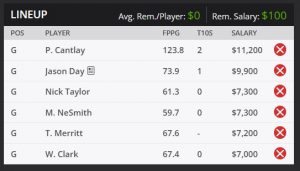 *Daniel Berger had to withdraw because of a back injury. I updated the cash contest lineup with Patrick Cantlay. His odds of winning increased with Will Zallatoris and Daniel Berger out of the field. 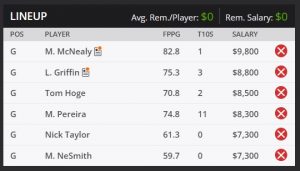 * I wrote in the “Pebble Beach Strategy” section that I like a “stars and scrubs” strategy this week. Here is a balanced lineup that I like because it has four golfers who will have a good chance for top-10 finishes.

– Maverick McNealy ($9,800) will likely get overlooked this week for the more popular golfers ranked around him. McNealy has been in my core a lot this year and he has not let me down yet. He has made six cuts in a row, but he needs to do more than just make the cut at his current price… No problem. McNealy finished 2nd and 5th in his last two trips to Pebble Beach. This could be the tournament where McNealy gets his first win.

– Lanto Griffin ($8,800) has been playing well this year. He made his last six cuts and that includes three finishes in the top-10. Griffin ranks 8th in Ball-Striking, 10th in Shots Gained Approach and 7th in Proximity to the Hole. These stats should lead to a lot of easy birdie putts on the tiny greens at Pebble Beach.

– Mito Pereira ($8,300) was on everyone’s radar before the season because of his ball-striking skills, so it only makes sense to play Pereira at the courses where ball-striking in incredibly important. He has never played in the AT&T Pebble Beach Pro Am before but the lack of experience hasn’t stopped Pereira from having success at other courses this year. I will take a chance with this young golfer.

– Nick Taylor ($7,300) won this tournament the last time it was played on all three courses. Can he do it again? His form now is better than it was in 2020 when he held the trophy. Taylor has made his last four cuts on the PGA Tour. He has also made five of his last six cuts at Pebble Beach. Taylor should be a safe golfer with a lot of upside.

– Matthew NeSmith ($7,300) is your golfer if you believe in the numbers. NeSmith sticks out when I looked at the key stats for this tournament. He ranks in the top-25 in all of the stats and 11th in Shots Gained Total (a calculation of all the Key Stats). Not bad for $7,300. NeSmith finished 16th at Pebble Beach last year and 11th in 2020. He should have a good chance to finish in the top-25 this week. 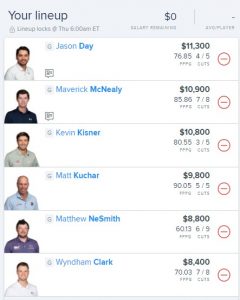 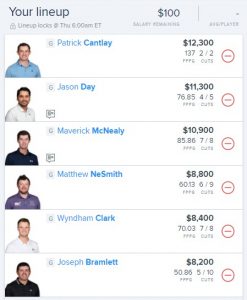 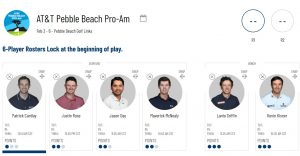 * This is the 5th tournament of Segment 2. There are 10 tournaments in this segment. The top golfers will be playing most of the tournaments leading up to THE PLAYERS in early March. We need to make sure we save some of our top golfers for THE PLAYERS.

My One & Done Pick is: Jason Day (Pebble Beach)

Best Bets for the Pebble Beach