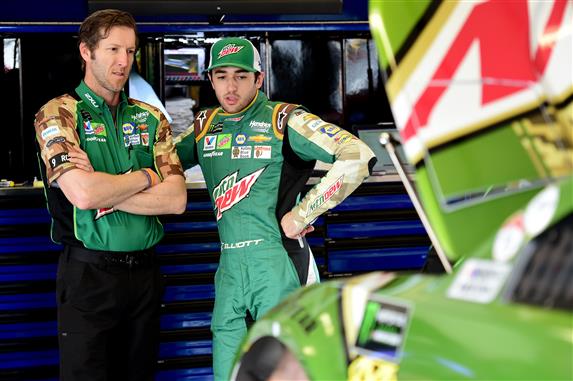 The NASCAR Cup Series will be back to a double-header schedule this weekend at Dover International Speedway. The cars will be on the track Saturday at 4 p.m. ET (NBCSN) and then they will line them up again for another race Sunday at 4 p.m. ET (NBCSN). The Monster Mile is a unique track so it will be a good idea to analyze the last race to help us predict what will happen this weekend. Here are my race notes from the Drydene 400 in 2019…

– The Track: The 2019 aero package caused the race at Dover last year to be pretty easy for the drivers to move their cars around the track. There was only one caution in the race and it was for debris on lap nine. The teams who had the fastest cars on the 15 and 20-lap average speed chart in practice were the teams who ran upfront in the race.

– Martin Truex Jr. started last in the spring race at Dover and he went to Victory Lane. In the fall he quailed 3rd, had the best car in practice and one of the best cars in the race. The No. 19 car led 15 laps, finished 2nd in Stage 1 and won Stage 2. He was running down Kyle Larson at the end of the race but ran out of laps to catch him. Truex finished 2nd. It was his 6th top-4 finish in his last 7 races at Dover.

– Kyle Busch entered the race at Dover needing a good finish since he finished 2 of the 3 races in the first round of the playoffs outside the top 19. Busch dug himself a hole with an 18th place qualifying effort. He quickly went to the front and finished 8th in Stage 1. The car was not good in traffic though and Rowdy was not able to lead any laps and only able to finish in the 6th position.

– Denny Hamlin entered the race on a hot streak in the playoffs. He has never won at Dover but the No. 11 team thought the race last year was their best chance to get to Victory Lane. Hamlin won the pole, led a race-high 218 laps, won Stage 1 and finished 3rd in Stage 2. Some poor adjustments tightened his car and it caused Hamlin to finish the race in the 5th position.

– Erik Jones had a great race in the spring at Dover. He started 15th and finished 6th. The No. 20 car was fast again last October but Jones did not get the finish he needed. The No. 20 car qualified 8th, finished 9th in Stage 1, 7th in Stage 2 but lost speed in the final Stage because his team started their final run on tires with low air-pressure and it took a while for the air to build up so the car could pick up some speed. . Jones finished the race in the 15th position.

– Brad Keselowski only finished 12th in the spring race and it was not much better in the fall. Keselowski qualified 16th and had a 10.98 average running position (11th best). The No. 2 car finished right outside the top 10 in Stage 1 and 9th in Stage 2. Keselowski finished the race in the 11th position.

– Joey Logano had a horrible race at Dover last year and that is an understatement. Before the race even began, the No. 22 car broke and axle. Logano had to come to pit road to fix the car and started the race 24 laps down. He gutted out what he could for a 34th place finish.

– Ryan Blaney only has a 21.25 average finishing position in his 8 races at the Monster Mile. Blaney had a fast car but terrible luck last year. Blaney qualified 10th, finished 10th in Stage 1 and 8th in Stage 2. He spent most of the race running in the top 10 but his suspension broke on lap 297. It ended Blaney’s race and he finished 35th.

– Clint Bowyer had a decent race at Dover in the spring with his 9th place finish. He needed a good finish to advance in the playoffs so the team took some chances on pit road. Bowyer qualified 17th and was running outside the top 15. The No. 14 team took two tires to gain track position and it moved Bowyer up to the 8th position. He was able to maintain most of his track position and Bowyer finished 10th in the race.

– Chase Elliott did not have any luck in the playoffs last year and the Monster Mile bit him in the fall race. Elliott qualified 5th and his car was one of the best in practice. The car blew up on lap 8 and caused Elliott to finish last. Elliott had a 4.72 average finishing position at Dover before last year’s race so I would not worry too much about his last-place finish.

– William Byron had a good race at Dover in the spring when he qualified 2nd and finished 8th. He did not have the same success in the fall. The No. 24 car qualified 4th and he was running in the top 10 in the first half of the race. The car got tight over the long runs and Byron was unable to keep his track position. The No. 24 car finished in the 13th position.

– Jimmie Johnson has 11 trips to Victory Lane at the Monster Mile. He had a decent race in the fall last year at Dover. The No. 48 car qualified 11th, finished 7th in Stage 1 and 5th in Stage 2. Johnson had a 6.92 average running position (6th best) and finished the race in the 8th position.

– Kurt Busch has a 7.75 average finishing position in his last 4 races at the Monster Mile so Dover has been a pretty good track for him. Last year he qualified 9th, had a 10.44 average running position (10th best) and finished the race in the 9th position. He was already eliminated from the playoffs so the No. 1 team spent most of their practice time working on setups for Kyle Larson. Busch may have been better if he spent time working on setups for his own car.

– Kyle Larson entered the race at Dover last year without a trip to Victory Lane since 2017. Dover ranks as his 2nd-best track so it was no surprise to see the No. 42 car dominate the fall race at Dover. Larson qualified 2nd, finished 3rd in Stage 1, 2nd in Stage 2 and lead 154 laps (2nd most). Larson’s car kept getting better and it allowed him to go to Victory Lane for the first time at Dover. Matt Kenseth will be in this car this weekend.

– Ryan Newman is better on the flat tracks than he is on the high-banked tracks. Dover ranks as his 22nd best track out of 23. He finished 18th in the spring race and he was not any better in the fall. Newman qualified 24th, had a 22.98 average running position (23rd best) and finished 22nd. There are better tracks to use Newman at.

– Ricky Stenhouse Jr. entered the race at Dover with a 20.2 average finishing position at Dover. It is surprising that he does not run better at the Monster Mile since he is so good at Bristol. Stenhouse finished 33rd in the spring race and came back and finished 16th in the fall. He was able to score 3 place differential points for his 19th starting position.

– Chris Buescher has not been good at Dover in his career. The Monster Mile ranks as his worst track. He has 8 starts at the track with a 24.75 average finishing position. Last year Buescher finished 23rd in the spring and 36th in the fall (His engine blew up on lap 232). There are better tracks to use Buescher at.

– Austin Dillon qualified 16th and finished 19th in the spring race and he had a similar finishing position in the fall. Dillon qualified 27th and finished 18th. He scored 9 place differential points so that made the No. 3 car a decent cheap choice in DFS. Dillon does not always finish in the top 15 at Dover but he does score place differential points in most of his starts at the track.