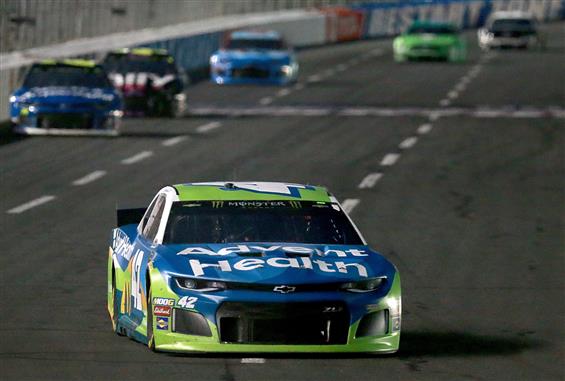 Kyle Busch put a whopping on the field last year in the Coca-Cola 600. Busch won the pole, won both Stages, led 377 of the 400 laps and took a bow in Victory Lane. The Joe Gibbs Racing cars all ran well. Martin Truex Jr. finished 2nd and Denny Hamlin finished 3rd. Brad Keselowski and Joey Logano also had fast cars in the race. Joe Gibbs Racing and Team Penske have won every non-Superspeedway race this season. It could be a battle between these two teams again Sunday.

There are 400 laps in the race Sunday. That means there are 100 points available for leading laps and 200 points available for fastest laps. We need to treat this race like a short track. That means dominators will be very important. The trend at the Coca-Cola 600 is for one driver to dominate the race. Martin Truex Jr. led 392 of 400 laps in 2016 and 233 of 400 laps in 2017. Last year Kyle Busch led 377 of 400 laps. You could not win your DFS contest without these drivers in your lineup. The race should be slightly different in 2019.

When we look at the drivers who have led the most laps on the 1.5-mile tracks this season, we will see that there are more dominators from what we have seen in the past. There were 2 main dominators (Joey Logano and Kevin Harvick) at Las Vegas. Both drivers led 32% of the laps. There were 5 main dominators at Texas (Kyle Busch, Jimmie Johnson, Denny Hamlin, Chase Elliott and Erik Jones). Each driver led at least 30 laps. There were 3 drivers who led at least 45 laps at Kansas (Kevin Harvick, Chase Elliott and Alex Bowman). I still expect one driver to lead 100 laps at Charlotte, but I doubt we will see a driver dominate the race the way Kyle Busch and Martin Truex Jr. did the last 3 seasons.

My Fantasy Live picks start the season on fire but cooled off at the short tracks. After two good races at Dover and Kansas, the picks are starting to climb back to the top of the standings. My Fantasy Live picks are currently beating 97.9% of the competition. I have all of my allocations with the drivers mapped out for the rest of the season so we should beat 99% of our competitors for the 7th straight season.

*Pick for the Pole*: Our pick for the pole needs to be in before qualifying at 7 p.m. ET Thursday. My pole pick will be posted after the first practice Thursday (4 p.m. ET).

Kevin Harvick(4): How frustrating must it be for Harvick right now? Week after week he shows up with the fastest car but he still has not found Victory Lane. I think that will change in the Coca-Cola 600. Harvick has the best Driver Rating, led the most laps and he has the best average running position on the 1.5-mile tracks this season. He was very fast in the All Star race and he should be fast again Sunday. I expect Harvick to win the pole, lead the most laps and finish in the top 3 Sunday.

Kyle Busch (5): The No. 18 team is not winning races like they were earlier in the season but it is hard to ignore Busch’s statistics at Charlotte. He has finished 1st or 2nd in the last 2 Coca-Cola 600s and last year he won both Stages and led 377/400 laps. Those are numbers I cannot fade Sunday. I expect Busch to challenge Harvick for the Stage wins and for a trip to Victory Lane Sunday.

Joey Logano (4): Logano has been hit or miss on the intermediate tracks this season so I will be watching him closely in practice to see if he is a driver we want in our lineup Sunday. Logano won at Las Vegas and finished 2nd at Fontana. He also finished 17th at Texas and 15th at Kansas. Logano had the best green lap speed and the 2nd best Driver Ranking in the All Star race, so I will pencil him into this position for now.

Chase Elliott (7): Elliott has been on a hot streak over the last month. He won at Talladega, finished 5th at Dover and 4th at Kansas. He has also led at least 35 laps in 7 of the last 8 races. Elliott is a smooth and steady driver and that is what it takes to win a marathon race. Hendrick Motorsports is one of the teams on the rise so I will use their top driver in my Fantasy Live lineup this week.

Clint Bowyer (6): I have to pick Bowyer this week. I was afraid that he would punch me in the nose if I left him off my team…LOL. The No. 14 car was fast in the All Star race but Bowyer kept finding trouble. That race is a sprint and the Coca-Cola 600 is a marathon. I expect Sunday’s race to be calmer and provide Bowyer a chance to run up front. He finished 2nd at Texas and 5th at Kansas so Bowyer has a history of running well on the 1.5-mile tracks this season.

My Garage Driver this week will likely be Martin Truex Jr. (7). It is hard to believe that I do not have the driver who led 392 of 400 laps in the Coca-Cola 600 in 2016 in my starting lineup. Truex was really good at the short tracks this season but he has only been average on the intermediate tracks. He could easily show up and dominate this race again so I need to at least have him penciled in for a Garage position.