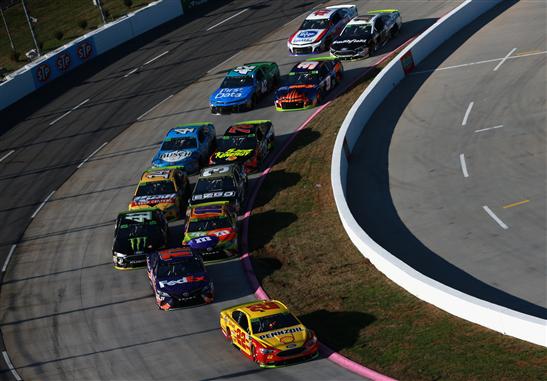 The Monster Energy NASCAR Cup Series will travel back to the east coast this week for some short track racing at Martinsville. Everyone talks about different ways to improve the sport. It is simple… add more short track races. It is the most exciting racing of the season and in my opinion there are not enough of them. The STP 500 can be seen Sunday at 2 p.m. ET on Fox Sports 1.

There will be no track activity for the MENCS Friday. The cars will make their first laps in the first practice at 9:30 a.m. ET (FS1) Saturday. Final practice will be at 12:30 p.m. ET (FS1).  Qualifying will be at 5 p.m. ET (FS1), after the Gander Outdoor Truck Series race. Our lineups must be set by 7 a.m. ET Saturday. Do not forget.

Kyle Busch won the pole for the last race at Martinsville (October 2018). He led 100 laps and finished fourth. Denny Hamlin took over the lead and won Stage 1. Hamlin almost won Stage 2 but he was passed by Joey Logano on the last lap. The No. 22 car took over the race in the final Stage. Logano led 309 of the 500 laps. It was an epic battle between Martin Truex Jr. and Logano in the final 10-lap of the race. In the end, Logano decided to move the No. 78 car and secure his spot in the championship race. Will there be payback this week? We will see…

Martinsville is a rhythm track. Drivers either know how to turn fast laps at this track or they don’t. We will not see a driver who has never finished in the top 10 at Martinsville show up and run well. You need to concentrate on the drivers who have had success in the past. Also, track position will be very important. Martinsville is the hardest track on the circuit to make a pass so the drivers starting up front should stay there for a good portion of the race.

The race this week comes down to dominators. If you have the main dominator in your lineup you will likely score well. If you don’t have him, you are throwing away your money.

The drivers I expect to be the top dominators this week are: Kyle Busch, Joey Logano, Martin Truex Jr., Brad Keselowski and Denny Hamlin

The drivers who could be the top value picks (Under $9K) for the race Sunday include: Clint Bowyer, Chase Elliott and Jimmie Johnson

The drivers I expect to be the best cheap drivers (Under $7K) for the race Sunday include: Ryan Neaman, Chris Buescher, Ty Dillon and Michael McDowell

My Fantasy Live picks continue to perform well. The picks have beaten 99% of the competition for 6 straight seasons and we are on our way to another great finish. The picks are currently beating 99.1% of the entries after five races. I have all of the drivers mapped out for their best tracks so just leave the allocations up to me. I have you covered. We will have enough great drivers to get us to the finish line.

*Pick for the Pole*: Our pick for the pole needs to be in before qualifying at 5 p.m. ET Saturday. My pole pick will be posted after final practice Saturday (2 p.m. ET).

Kyle Busch (7): I hate to burn another allocation with Busch but he is running too well right now and his stats at Martinsville are too good to ignore. Busch leads the MENCS in driver rating (129.5), laps led (582) and average finishing position (2.2) in the last four races at Martinsville. He also get his typical “warm-up race” since he will be bullying the boys in the Gander Outdoor Truck Series race Saturday. Like him or hate him, Busch is the best pick in the field Sunday.

Joey Logano (7): Logano is almost a lock to qualify up front this week. He has 4 poles in the last 8 races at Martinsville and has qualified on the front row in 6 of the last 8 races. That should mean great track position, a lot of Stage points and good chance to finish in the top five. Logano dominated the last race at Martinsville last October. He led 309 of the 500 laps and politely asked Martin Truex Jr. to move over so he could win the race. I am not worried about retaliation between the two drivers.

Brad Keselowski (8): Keselowski has been running well this season and his hot streak should continue at Martinsville. Keselowski has not finished outside the top 10 at Martinsville since 2015 (7 races). He has the second-best driver rating and led the third most laps in the last 4 races at the track. I expect Keselowski to score a lot of Stage points and finish in the top five this week.

Denny Hamlin (8): Hamlin has been on quite the hot streak this season. His 6.8 average finishing position through the first five races is second-best to Kyle Busch. Now Hamlin gets to compete in his home state at one of his best tracks. Hamlin has the second-most wins at Martinsville (5) behind Jimmie Johnson. We have to keep an eye on him in practice though. Hamlin has performed really well in October at this track and has been hit or miss in March. It will be nice to have him on the team just in case the “good Hamlin” shows up Sunday.

Clint Bowyer (8): Bowyer must be on every team this week. Martinsville is by far his best track. Bowyer won the STP 500 last year and he should have a good chance to do it again. Drivers need to know how to save their brakes, have the rhythm to get on and off the gas at the right time and be aggressive enough to move people without damaging your car. Bowyer knows all of these skills well. This is a great week to use an allocation with Bowyer.

My Garage Driver will likely be Jimmie Johnson. We have to take a chance with the seven-time champion at some point this season, right? Well there are few tracks better for Johnson then Martinsville. He leads the MENCS in wins (9), laps led (2,863), Driver rating (119.8) and average finishing position (8.01) at Martinsville. Johnson is showing some signs of life this season. Downforce and horsepower will not matter much at NASCAR’s shortest track. Johnson should be able to finish in the top 10 Sunday.

Pick for the Pole: Joey Logano