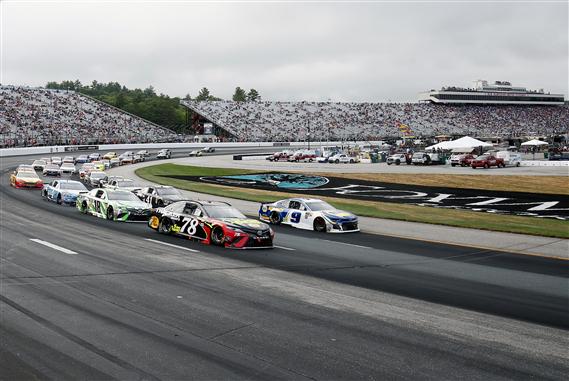 NASCAR really needs more short tracks. It has been three months since the MENCS has competed on a track under 1.5-miles in length. While the competition on the intermediate tracks has improved this season, there is nothing better than the beating and bagging on the short tracks. That is what we get this week at New Hampshire Motor Speedway, otherwise known as “The Magic Mile”. The Foxwoods Resort Casino 301 can be seen Sunday at 3 p.m. ET on NBC Sports Network.

* NASCAR will inspect the cars twice this week. The first inspection will be Friday before the cars make any practice runs. The second inspection will be Sunday morning before the race. Cars that fail once Sunday will have no penalty. The teams will be allowed to make changes and try again. If the cars fails a second time, the car will start in the rear of the field but will be scored from their qualifying position in Fantasy NASCAR. Cars that fail a third time will lose a crew member. Fail a fourth time and the driver must serve a pass-through penalty at the start of the race.

Kurt Busch won the pole for the Foxwood Resort Casino 301 last year. He led 94 laps, finished both Stages in the top 4 but only finished 8th in the race. The interesting thing about this race is the amount of dominators it had. Five drivers were able to lead at least 20 laps (Kurt Busch 94, Martin Truex Jr. 83, Aric Almirola 42, Kyle Busch 36 and Chase Elliott 23). Truex and Elliott ran well in the race. Both drivers led a lot of laps, finished both Stages in the top 3 and finished the race in the top 5. Kevin Harvick chased down Kyle Busch at the end of the race to win for the 3rd time at New Hampshire.

The race this week is 301 laps (not sure why they have 301 laps instead of 300 because it makes the race 318.5-miles in length). That means there will be 75.25 points available for leading laps and 150.5 points available for fastest laps. The trend the last two seasons at the Magic Mile is to have one driver lead 75 laps and 4 drivers lead between 25-50 laps. There should be 5 dominators Sunday and we will need at least 3 of them in our lineups. This is a good week to play a Stars and Scrubs lineup to ensure we are paying up for the drivers who will lead the most laps this week.

The drivers I expect to dominate the race Sunday include: Kyle Busch, Martin Truex Jr., Chase Elliott and Kevin Harvick

I will post my final DraftKings picks no later than Saturday evening.

What a disaster it was at Kentucky for the Fantasy Live lineup. Yes, Kurt Busch won the race for us but the rest of the lineup had nothing but problems. Martin Truex Jr. had 7 cylinders and fell back to 19th place. Aric Almirola run up front for most of the race but fell back to 14th at the end. Jimmie Johnson was running 7th when he spun into the wall and Daniel Suarez had a fast car but pit penalties and flat tires kept him in the back of the pack. The Fantasy Live picks fell from beating 99.3% of the competition to 99%. We still have time to make a run to the top at the end of the regular season.

*Pick for the Pole*: Our pick for the pole needs to be in before qualifying at 4:30 ET Friday. My pole pick will be posted after the first practice Friday (1 p.m. ET).

Kyle Busch (3): Busch has been a monster on the short tracks this season and he has been the best driver at New Hampshire over the last 3 seasons. Busch has won at Phoenix and finished 3rd at Martinsville. His success in those races should translate into speed at the Magic Mile. Busch finished 1st and 2nd in his last 2 races at this track and he led 223 laps. This is a great race to use another allocation with the No. 18 car.

Martin Truex Jr. (3): Truex has never won at New Hampshire (0-25) but that does not mean his not one of the best picks in the field. Truex has a series-best 4th place finish, led a series-high 332 laps and has the second-best Driver Rating (125.9) in the last 3 races at the Magic Mile. Truex won the last two short track races (Richmond and Dover) so he will have a good chance to score his first win at one of his many “home tracks”. I have no problem using another allocation with the No. 19 car Sunday.

Chase Elliott (3): Elliott keeps getting better and better at New Hampshire. Last year he qualified 10th, finished 2nd in Stage 1, won Stage 2, led 23 laps and finished 5th in the race. Each season he shows improvement at the Magic Mile. If the trend continues, the No. 9 car could be in Victory Lane Sunday. I like the progress Hendrick Motorsports has shown over the summer so I will use another allocation with Elliott this week.

Kyle Larson (7): Larson has not had much luck on the short tracks this season but that was before Jeff Gordon took him to the Voodoo store. Hopefully his luck changes at one of his best short tracks. Larson finished 2nd at New Hampshire in both races at the track in 2017. He was running up front last year when a pit road penalty put him back in the pack. Larson needs points and a win to make the playoffs. The No. 42 team will be very aggressive to score Stage points and try to win the race. I like that in my Fantasy NASCAR driver.

Denny Hamlin (3): Hamlin has always been at his best on the flat tracks. He has 3 wins and 4 finishes in 2nd place at the Magic Mile. Hamlin usually runs up front so that means the No. 11 car should score a lot of Stage points this week. If you want to know where Hamlin will finish in the race Sunday, a 5th place prediction is not a bad call. Hamlin finished 5th at Phoenix, 5th at Martinsville, 5th at Bristol and 5th at Richmond. I will happily take a 5th place finish from him Sunday.

My Garage Driver this week will likely be Ryan Blaney (5). Joe Gibbs Racing and Team Penske Racing have dominated the short tracks this year so I will have another one of their drivers in the Garage. Blaney has started to figure out the Magic Mile. He finished 9th in 2017 and 7th last year. He has also scored Stage points in every Stage at the track. Blaney has also been decent on the short tracks this season. He finished 3rd at Phoenix, 4th at Martinsville and 4th at Bristol. Blaney is a good insurance policy to have in the Garage Sunday.

Pick for the Pole: Joey Logano