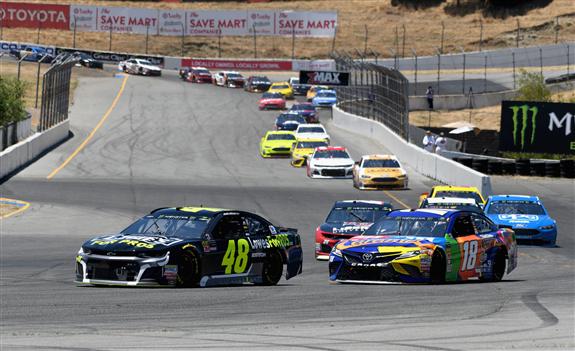 Road Course racing returns to the MENCS this week as the team will compete in the Toyota Owners / Save Mart 350 at Sonoma. The cars will be back to the 750 HP engines and the aero ducts will be removed. The cars will be nearly the same as what we have seen in the past but the track will be different. The teams will run “The Carousel” which will make the track 2.52-miles in length and have 12 tricky turns. It should be another great race in Northern California. The Toyota Owners / Save Mart 350 can be seen Sunday at 3 p.m. ET on FS1. 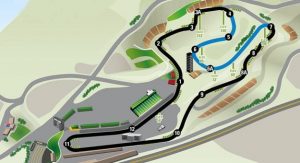 Kyle Larson won the pole at Sonoma last year. He has won the pole in Northern California for the last two races. And once again he could not hold the lead. Martin Truex Jr. qualified 2nd, led 62 and went to Victory Lane. It was the second straight year Truex dominated this race. Kevin Harvick (led 35 laps and finished 2nd), Clint Bowyer (finished 3rd) and Chase Elliott (finished 4th) ran well in the race.

This is a unique race for DFS NASCAR. There are only 110 laps scheduled for the race Sunday. That means there are only 27.5 points available for leading laps and 55 points available for fastest laps. The trend at Sonoma is for the main dominator to lead 40 laps, the second dominator to lead 25 laps and two other drivers to lead around 15 laps each. The fastest laps are usually spread throughout the field. The main dominator typically scores 15-20 bonus points so dominators will not be as important as they are at other tracks.

My strategy this week will be to focus on finishing position. I want as many drivers as possible who can finish in the top 15. I am not going to chase the dominator points or place differential points. I will be selecting the drivers with a history of running well on the road courses and had fast cars in practice. If all 6 drivers finish in the top 15, you lineup will score well this week.

The drivers I expect to dominate the race Sunday include: Kyle Busch, Martin Truex Jr., Kevin Harvick and Chase Elliott

The Fantasy Live picks at Michigan were performing well until Clint Bowyer got loose and hit the wall. He had a fast car so leaving him in the starting lineup was the right decision. Sometimes luck is not on our side and that is what happened in the Irish Hills. The picks are still performing well for the season.  The Fantasy Live picks are beating 98.9% of the competition.

*Pick for the Pole*: Our pick for the pole needs to be in before qualifying at 12 p.m. ET Saturday. My pole pick will be posted after the final practice Friday.

I am going to try and make it through the race at Sonoma without using an allocation with Kyle Busch or Kevin Harvick. I am running low on starts with these two drivers so I need to save them.

Martin Truex Jr. (5): Truex has been awesome in Sonoma and he should be even better now that he is a part of Joe Gibbs Racing. Truex won the race last year in wine country and he had the car to beat in 2017 but his engine expired. Truex has two wins at this track and he will be a serious threat to win his third Sunday. I have five allocations left with Truex so I have no problem using one of them on the road course.

Chase Elliott (5): Elliott is quickly becoming one of the best road course drivers in the sport. Last year he won at Watkins Glen, finished 6th on the Charlotte Roval and 4th at Sonoma. He has finished his last two races in Northern California in the top eight. Elliott has finished five of the last six races this season in the top five so he has a lot of momentum right now. I think he will make it six of the last seven in the top five after the race Sunday.

Denny Hamlin (5): Hamlin has been very good on the road courses and he has been very consistent at Sonoma for the last three seasons. Hamlin finished 2nd in 2016, 4th in 2017 and 10th last year. He is also very good at running in the top 10 and scoring a lot of Stage points. Joe Gibbs Racing has been very good in 2019 so I expect their cars to be fast at Toyota’s home track. Hamlin is a hard driver to trust but I will gamble with him this week.

Clint Bowyer (5): This is not the race to try and save your allocation with Bowyer. He is the most consistent driver in the MENCS on the road courses. Bowyer has finished four of his last five road course races in the top five. Bowyer has also finished 3rd, 2nd, 40th (transmission problems) and 3rd at Sonoma since 2014. He is almost a lock for a top-three finish if his engine makes it for 110 laps. I have no problem using another allocation with Bowyer at one of his best tracks.

Kurt Busch (5): Busch will have some momentum heading into the race at Sonoma after his 2nd-place finish at Michigan. He really does not need it though. Busch has been a lock for a top-10 finish on the road courses since 2012. His average finishing position in the last 13 road course races is 8th place. That is very consistent. Busch has not finished outside the top 10 at Sonoma since 2014 and he has not finished outside the top 12 at the track in over a decade. This is a great race to use Busch in your lineups.

My Garage Driver this week will likely be Jimmie Johnson (8). He is not the first name that comes to mind when people think of road course racing, but he has been very consistent in his home state. Johnson has a 6.9 average finishing position in the last 11 races at Sonoma. That is a long time to consistently finish in the top 10. I am going to try and use an allocation with Johnson and save my top drivers for another track, but I will start him in the Garage just in case he is not as fast as I expect him to be.

Pick for the Pole: Kyle Larson