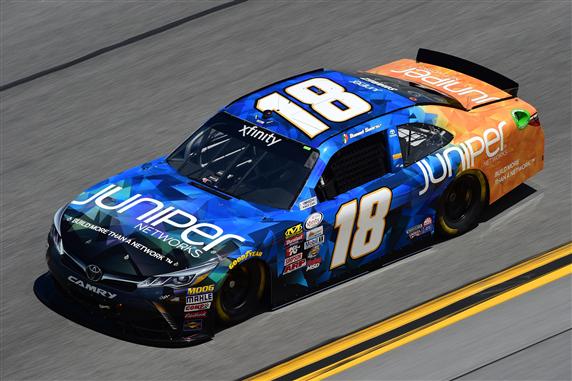 The NASCAR Xfinity Series will competes at ISM Raceway (I will call it Phoenix) this week. The MENCS will practice immediately following the Xfinity Series qualifying. Since my priority is to focus on my Garage Talk Notes for the MENCS, I will not have a lot of time to make picks for the DraftKings Xfinity Series contest. So here is a preview to help you with your selections this week.

The theme in the winning lineups is that you must have the driver who leads the most laps. That has been one of the Cup Series drivers in the last two races and it is likely to be Kyle Busch or Brad Keselowski this week.

Having two Cup Series regulars in your lineup has been the common theme as well. I am not so sure that will be the case this week. Fantasy players will need Kyle Busch or Brad Keselowski and it will be hard to fit Jamie McMurray or Ty Dillon in the same lineup because of their price.

Selecting two cheap drivers who have a good chance to score position differential points has also been the winning strategy. I plan to use that strategy this week.

Fading Kyle Busch was the winning strategy at Las Vegas. I think you will be messing with fire if you use that same strategy this week. Joe Gibbs Racing has dominated the races at Phoenix since the track was reconfigured and it is likely they will do the same Saturday. Busch led 190 of the 200 laps last year. Phoenix is the best track in the Xfinity Series. He has won 6 of the last 7 races at the track and the other race he finished second. Busch is highly priced, but I plan to pay up for him.

Using Christopher Bell has been a winning strategy and I think the trend will continue Saturday. Bell qualified 8th and finished 4th at Phoenix in November. Now that he has a better team and a better car, I think he will challenge Kyle Busch up front. Having Busch and Bell at the top of your lineup should be a winning strategy Saturday.

It is going to be hard to fit another top driver in your lineup with Kyle Busch and Christopher Bell at the top. My plan is to drop down in salary a bit and use Tyler Reddick. He has been the 2nd-highest scoring driver in DraftKings Xfinity Series contests this season. Reddick is the Xfinity Series Points leader. He should have another strong run Saturday.

Brandon Jones has been one of the biggest bargains this season. Phoenix is not his best track but the switch from Richard Childress Racing to Joe Gibbs Racing should help him. Jones finished 7th last week and I think he can do the same Saturday.

I will need two cheap drivers in order to make this lineup work. I will be looking for drivers who will have a good chance to score position differential points. The two drivers I have penciled in right now are Josh Williams and Mike Harmon.

Josh Williams is averaging 34.8 points per contest in DraftKings. That is more points than Christopher Bell, Ty Dillon, Cole Custer and Daniel Hemric. He has been a great bargain because he qualifies near the back of the top 20 and he moves up 10 spots in the race. I think he is a great value pick for the race Saturday.

Mike Harmon is almost a lock to start 38th or worse. He gained 9 spots in the race last week and I am hoping he can do the same at Phoenix. This is a total punt play, but I think it will work.

Other cheap drivers who could work if they qualify in the back include Stephen Leicht, Joey Gase, Dylon Lupton or Josh Bilicki. It is important to get Kyle Busch and three quality drivers in your lineup, so you will have to dip low to make this happen.