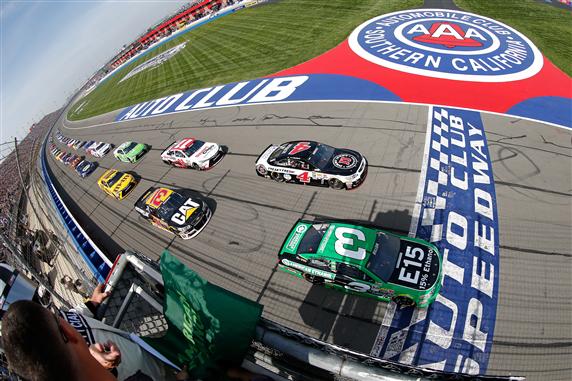 The Monster Energy NASCAR Cup Series will compete this week at Auto Club Speedway in Fontana, California. This is an old worn out track with multiple groves to race on. Some of the highest speeds of the season will be produced this weekend. Be sure to check out the race Sunday at 3:30 pm ET on Fox Sports 1.

If you have not signed up for DraftKings, there is no better time than now. Sign up here (DraftKings) and let me help you win some money this season.

Last week did not go so well. Joey Logano looked like a great dominator pick for my teams but his brakes could not last the entire race. Matt Kenseth was a major disappointment. He had the second-fastest 10 lap average, second-fastest 15 lap averages and the second-fastest 20 lap average speed in the final practice. When they dropped the green flag Kenseth fell like a rock. I will not make the same mistake by using the No. 20 car anytime soon. It is time to regroup and get back to the cash window in California.

My strategy this week is to focus on the driver’s performance over the first four races and not worry too much about the practice speeds. Last week I went off the speed chart and it burned me. My best team consisted of the “hot streak drivers.” I had Brad Keselowski, Chase Elliott, Kyle Larson and Martin Truex Jr. These drivers have been the most consistent performers this season in DraftKings. It would be a good idea to build your team around their cars.

Kevin Harvick ($10,800): Harvick will have the best chance to score the most points in DraftKings this week. The No. 4 team will most likely be without crew chief Rodney Childers (unless they appeal the suspension), but I am not worried about it. Stewart-Haas Racing is a deep organization and they will find a replacement crew chief. Harvick has led 45% of the laps in the last two races at Auto Club Speedway and he finished second in both races. I would not be surprised to see him have a performance similar to what the team had in Atlanta this season.

Kyle Busch ($10,500): The No. 18 team has been the best for Joe Gibbs Racing in 2017. Their results do not reflect how well they have run in the race. That could change Sunday. Busch is always good at Auto Club Speedway and he performs at his best when he competes in the Xfinity Series race in the same weekend. Busch will probably win the Xfinity Series race Saturday and go for the weekend sweep on Sunday.

Joey Logano ($10,300): The No. 22 team has been fast all season. The only thing that could stop them is mechanical failure. This track will not be as hard on brakes as Phoenix so I expect Logano to be upfront this week. Logano has finished in the top seven in three of the last four races at Auto Club Speedway. He will have more knowledge about the race since he is competing in the Xfinity Series race Saturday.

Brad Keselowski ($10,000): The No. 2 team will be without their crew chief Paul Wolfe this week. I am not concerned about how his absence will affect the team. The cars for Auto Club Speedway were setup weeks in advance and Brian Wilson will serve as the crew chief for the Blue Deuce Sunday. Wilson led Joey Logano to Victory Lane last week in Phoenix in the Xfinity Series race and he serves as the lead engineer for the No. 2 car. He will do just fine this week. Keselowski has scored the most points in DraftKings this season and there is no reason to believe they will slow down any time soon.

Chase Elliott ($9,600): The No. 24 car has been consistent this season. The difference between Kyle Larson and Elliott is that the No. 24 car has led more laps than the No. 42 car, but Larson usually finishes higher in the race. Both young drivers will be excellent choices for your team Sunday.

Kyle Larson ($9,100): Larson has been the most consistent driver this season in DraftKings. He has not led as many laps as other drivers but he has consistently finished in the top two (finished second at Atlanta, second at Las Vegas and second at Phoenix). Auto Club Speedway is one of Larson’s best tracks. No driver runs the top of the track as well as he does. Larson won at a similar track (Michigan) last year and he is my favorite to win Sunday.

Ryan Newman ($8,000): Finally Newman found his way to Victory Lane. Now the No. 31 team will have some momentum heading into the race at Fontana. This has been a good track for Newman. He has the eighth-best average finishing position in the last two races at the track. Newman usually qualifies outside the top 15 and finishes near the top 10 at this track. He will be one of the safest picks for your contest this week.

Jamie McMurray ($7,500): McMurray has been running well this season and it should continue this week at Auto Club Speedway. McMurray finished 10th at Atlanta, 8th at Las Vegas and 15th at Phoenix. Chip Ganassi Racing found some speed over the offseason. I expect McMurray to have another top-10 finish Sunday.

Ricky Stenhouse Jr. ($7,000): The No. 17 team has been one of the surprises of the season. Stenhouse finished 13th at Atlanta and 4th last week at Phoenix. He has a history of running well at Auto Club Speedway. Last year Stenhouse qualified 18th and finished 5th. He will be one of the best Cash Contest picks this week.

Ty Dillon ($6,300): Dillon will be competing in his first race in the Cup Series at Auto Club Speedway. He has run races at Michigan before in the premier series so I am not too concerned with his lack of experience. It will also help the Dillon is running the Xfinity Series race Saturday. Fantasy teams should expect Dillon to qualify outside the top 20 and finish near the top 15.

Danica Patrick ($6,200): The No. 10 car has not been very good this season but that should change Sunday. The Stewart-Haas Racing Fords have been very fast and Auto Club Speedway has eight lanes to race on. There will be plenty of room for Patrick to stay out of the way and slowly make her way inside the top 20 this week. That is what she does at this track. Ignore her results this season and try to find the courage to select her for your contest.

Michael McDowell ($5,700): The key to selecting a good cheap driver for your team is to find a car that will move up in the race. McDowell has finished higher than he qualified in every race this season. I doubt he will finish in the top 20 this week, but he should qualify near the No. 30 spot and finish near the No. 25 spot. That will be enough points for a driver at his price.

If you need any further advice with your team, look for me on Twitter @MrFantasyNASCAR or check out my Fantasy NASCAR Tips Page.