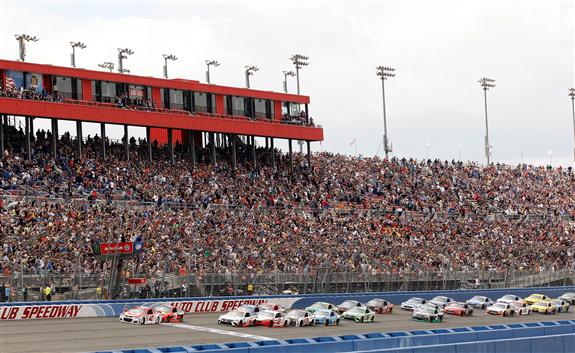 The Monster Energy NASCAR Cup Series will compete for the final race in the West Coast Swing this week. The series travels to Auto Club Speedway for the Auto Club 400.  The race can be seen Sunday at 3:30 pm ET on Fox.

* Qualifying for the Auto Club 400 will take place Friday. Our picks need to be entered before 3 a.m. ET on March 16th (Friday). Remember to get your picks in before the rosters lock.

My Driver Group Game picks are still performing well. Scoring over 300 points each week should be your goal in the Driver Group Game. So far my picks are averaging 308 points per race. If this continues all season we will finish in the top of our leagues. But this week my goal is at least 325 points because Auto Club is a fairly predictive track.

Auto Club Speedway is a two-mile oval that produces some of the fastest speeds of the season. The drivers can run the track almost wide open so this tends to be a hard race on the engines. The track is also worn out and races a lot like what we saw at Atlanta. The drivers who performed well at Atlanta should run well Sunday. Before we get into the picks, let’s take a look at the race at Auto Club last year…

Fantasy teams need to start to focus on the 2018 statistics now that the MENCS is four races into the season. A lot of the other sites like to focus on 10 year averages at a track. I really do not care how a driver performed 10 years ago at Auto Club Speedway. I am a big believer in momentum and current stats. So I will be focusing on the last two races at Auto Club Speedway and the drivers who performed well at Atlanta and Las Vegas for my picks.

Here are my picks for Auto Club…

Kyle Larson (9) considers Auto Club Speedway his personal playground. He is the best in the field at diving to the bottom and sliding to the top to makes passes. Last year he won the pole, led 110 laps and went onto Victory Lane. There are only two tracks on the schedule that are 2-miles in length (Auto Club and Michigan). Larson has won the last four races at these tracks. Since 2016 his average finishing position at the 2-mile ovals is 1.75. I think you have to give Larson a chance this week.

Kevin Harvick (7) is just too hot to ignore right now. He has won 3 races in a row and there is a good chance he makes it 4 in row Sunday. Harvick has had a lot of success at Auto Club. He received damage to his radiator on lap one last year when Denny Hamlin missed a shift and caused the No. 4 car to run into the back of him. Harvick still finished 13th. He was one of the best drivers at the track in 2015 and 2016. He qualified 2nd in both races and he finished 2nd  in both races. No driver has led more laps the last two seasons at Auto Club than Harvick. I will continue to play the hot hand this week.

Erik Jones (9) is my top driver in Group B this week. Joe Gibbs Racing runs very well at this track. Last year Jones qualified 14th and finished 12th. He almost won the race at Michigan though. The No. 20 will have a lot of speed and Jones has the talent to keep his car upfront. He is almost a lock for a starting position in my lineup Sunday.

Chase Elliott (7) has competed in two races at Auto Club and finished in the top 10 in both of them. I am a little worried about the speed in the Chevy’s this week but Elliott has been the fastest of the Hendrick Motorsports drivers. He looked pretty fast last week at Phoenix. I already used two allocations with Elliott and I would hate to burn another one. There is a good chance the No. 9 car shows up with a top-five car this week. If that happens I want to make sure Elliott is on my team.

Kurt Busch (8) has been running well this season so I will continue to use him until the Stewart-Haas Racing cars cool off. Busch finished 8th at Atlanta and led 52 laps. He was also running in the top 10 at Las Vegas when he lost control of his car and got into Chase Elliott. There is a lot more room to race at Auto Club so I doubt Busch will have any problems. This race is all about speed and Stewart-Haas Racing has it. I will roll the dice with the No. 41 car again Sunday.

Clint Bowyer (9) is off to a good start in 2018. If I am right and the cars that performed well at Atlanta will translate into finishes up front at Auto Club, Bowyer should be a lock for a top-10 finish. Bowyer qualified 9th and finished 3rd at Atlanta. He also had his best race of the year at Auto Club last year. He qualified 17th and drove through the field for a 3rd-place finish. Bowyer will be the 3rd Stewart-Haas Racing driver in my lineup this week.

Alex Bowman (6) is once again in my Group C lineup. I am quickly running out of allocations with Bowman but he is the best option. I am hoping that William Byron or Darrell Wallace Jr. improve in the next few races. Bowman finished 20th at Atlanta and 16th at Las Vegas. I expect him to finish somewhere in that range again this week.

William Byron (9) finally got to the front of the field and led some laps at Phoenix. Fans will soon get used to seeing the No. 24 leading the field, but it may not happen much this season. He only has one career race at Auto Club and it came in the Xfinity Series. Byron qualified 6th and finished 5th. I will watch him in practice and if he looks fast I will have no problem using Byron in the race.