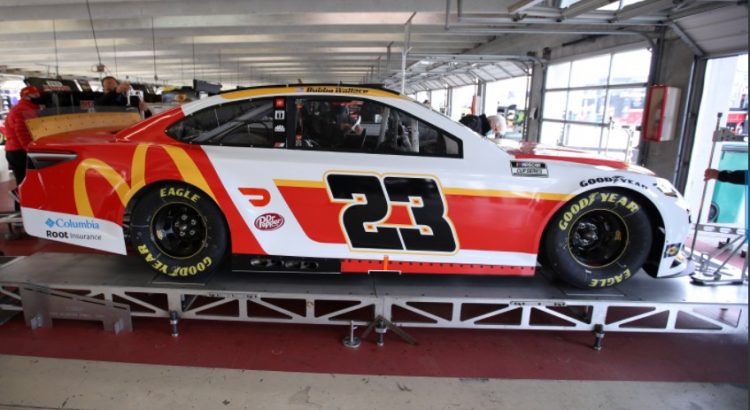 It’s Dirt Baby! The fans asked for it so NASCAR transformed Bristol Motor Speedway into a dirt track. They added 2,300 truckloads of dirt and clay to make the 38 degree banking, concrete track into a 19 degree, dirt track. It’s about to get dirty in Bristol so get your poncho out and let’s see who can win the inaugural Food City Dirt Race.

NASCAR will have two practice Friday called the “Bush’s Bean Practice Day”. The practices start at 4 p.m. ET on FS1. This means our Driver Group Game picks must be in by 8 a.m. ET Friday morning (Unless your commissioner changed the default settings)

Here are my picks for Bristol Dirt Race…

Group A is going to be tough this week. The drivers in this group do not have a lot of dirt track experience. Most of them have been entering dirt track races this year and some will race the Camping World Truck Series race Saturday (Kevin Harvick and Martin Truex Jr.). Here are my picks for Group A…

Denny Hamlin (9): Denny Hamlin does not have a lot of dirt track racing experience but he is a talented driver who should be able to figure it out after two practices and a Heat Race Saturday. Hamlin has one of the best home simulators at his house. He told SiriusXM NASCAR Radio last week that he had a team from I-Racing come to his house to install the Bristol Dirt Track on his simulator. He also said the track races a lot like Homestead on the simulator. Hamlin is one of the best at Homestead, so it is no surprise he compared the Bristol Dirt Track to Homestead. At least he should have some confidence. I will roll the dice with Hamlin this week.

Ryan Blaney (9): Ryan Blaney is the grandson of legendary dirt track racer, Lou Blaney, so he has dirt in his blood. Blaney started his racing career driving quarter midgets around the dirt tracks, before his dad (Dave Blaney) moved him to late model cars. Blaney does not have a lot of experience on dirt but I am sure his dad will help him out this week. Blaney picks up information quickly, so I will take a chance with the No. 12 car Sunday.

Austin Dillon (8): Austin Dillon will likely be in my starting lineup Sunday. He has some experience racing on dirt early in his career and he has experience racing a heavy stockcar on dirt (actually it was a truck). He won the inaugural Camping Truck Series race on dirt at El Dora Speedway in 2013. He has competed in the Truck Series race on dirt at El Dora three times and Dillon finished each race in the top 10 (5th place average finishing position). The only driver in the field with more experience in a stockcar on dirt is Stewart Friesen (He has four races in a Truck at El Dora).

Tyler Reddick (9): Tyler Reddick has had a lot of success racing Late Model Cars on dirt. He spent a lot of time racing in the World of Outlaws Late Model Racing Series and in the Dirtcar Summer Nationals events. Many of the drivers and crew chiefs predict the best way around Bristol Sunday will be right up against the cushion, similar to running the wall at Homestead. We saw what Reddick did this year at Homestead. He should be a good pick for the Bristol Dirt race too.

Kyle Larson (6): Kyle Larson is not only the best dirt track driver in the field this week; he is also one of the best dirt track racers in the world. Larson looks like a young Jeff Gordon at Hendrick Motorsports. Larson is almost a lock for a top-five finish this week and by far the favorite to win the race. I would like to save my allocations with Larson so I will be watching the practices and Heat Races closely to see if any of my other drivers are worthy of taking Larson’s spot in my starting lineup.

Chase Briscoe (9): Chase Briscoe grew up racing on dirt so he does have some experience. He also has competed in three races in the Camping World Truck Series at El Dora Speedway on dirt. Briscoe finished 3rd in 2017, won the race in 2018 and finished 7th in 2019. Briscoe is also running the Camping World Truck Series race at Bristol this week. That means he gets two more practices, one more Heat Race and the 150 laps in the Trucks to figure out the track. Briscoe is the best choice in Group C.

Ricky Stenhouse Jr. (7): Ricky Stenhouse Jr. is a former Dirt Winged Sprint Car Rookie of the Year. He drove for Tony Stewart’s USAC National Midget Car Series team, winning five times and scored 14 top-10 finishes. He was considered one of the best dirt track racers in the country. Stenhouse has been running very well on the paved tracks this season so I would like to save my allocation with him. I will have Stenhouse on my team, just in case he looks really good in practice and in the Heat Race Saturday.

*Stewart Fiessen is also a good choice but he is not available in the Driver Group Game. If he is added, Friessen would be a decent pivot from Chase Briscoe, but I still like Briscoe more.

I will post my final picks for Driver Group Game Sunday morning.