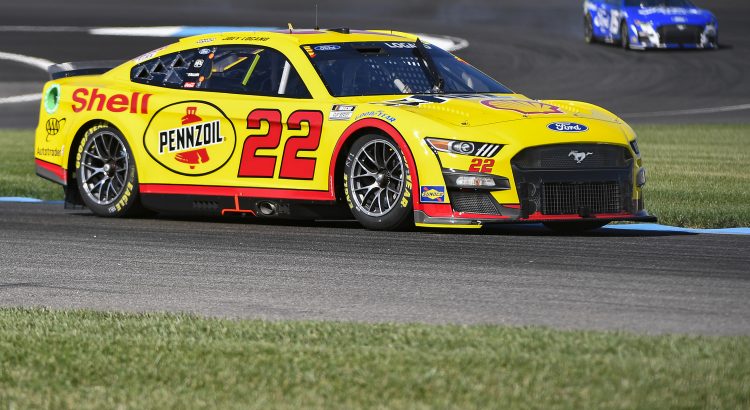 The Cup Series will compete in their sixth race this season on a road course Sunday when they travel back to Charlotte to race on the Roval. It will also be the last race in the Round of 12. Chase Elliott is the only driver to clinch a spot in the Round of 8 with his win last week at Talladega. Will Elliott win another road course race and another race in the Round of 12 or could there be another non-playoff driver in Victory Lane Sunday (Tyler Reddic?). It will be fun to watch. The Bank of America Roval 400 can be seen Sunday at 2 p.m. ET on NBC.

I’ll admit that I tried to be too cute with the picks last week. Chase Elliott was clearly the best pick in the Driver Group Game, but I decided to go with Martin Truex Jr. to be different from everyone else and because Truex scored the most Stage Points on the Superspeedways in 2022. That strategy backfired big time. No more being cute with the picks. I am simply picking the best drivers for the last five races and not worrying about allocations too much. I will figure out the picks for the next race, next week. We still have five weeks to finish strong. The races in the Round of 8 and the Championship Race should be easier to predict that Talladega and the Charlotte Roval.

Here are the picks for the Bank of America Roval 400 … 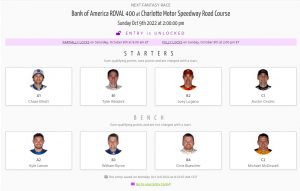 CHASE ELLIOTT (2): I have been saving my allocations with Elliott for the road courses so I will have the No. 9 car in my lineup this week. Elliott won the races at the Charlotte Roval in 2019 and 2020. He is also averaging 13.5 Stage Points in his last three races at the track. Elliott finished 4th at COTA, 2nd at Road America and 4th at Watkins Glen. He also won two poles on the road courses this year. There is no reason to fade Elliott at one of his best tracks.

TYLER REDDICK (2): My pick to win Sunday is not Chase Elliott. It is Tyler Reddick. The No. 8 car has been bad fast on the road courses this year. Reddick won at Road America and he the Indy Road Course. He also finished 5th at COTA and 7th at Watkins Glen. The No. 8 car will have a good chance to score bonus points for qualifying too. Reddick won the pole for the last race on a Roval at Indy. He is by far the best pick in Group B.

JOEY LOGANO (1): I only have one allocation left with Logano and if the No. 22 car is fast in practice and qualifies up front, I will use Logano in the race. Logano has scored the second-most Stage Points (behind Ryan Blaney) on the road courses this year. He had a hard time finishing the races on the road courses in the first half of the season, but Logano has improved in his last two races. Logano finished 6th at the Indy Road Course and 3rd at Watkins Glen. He has also finished 2nd and 7th in his last two races at the Charlotte Roval and has never finished outside the top-10 at the track. Logano should be a safe driver to have in your lineup Sunday.

WILLIAM BYRON (2): Byron has been the best driver in the field at the Charlotte Roval. He leads the Cup Series with at 121.8 Driver Rating and his average finishing position in his last three races at the track is 7th. Byron has the second-best average finishing position in the playoffs this year, so he is on a hot streak right now. Byron has not been great on the road courses this year, but I will have him on my team at one of his best tracks.

CHRIS BUESCHER (6): I will take a chance with Buescher this week. I thought about have Christopher Bell in the last spot in Group B, but I only have one allocation left with Bell and I want to save it for Las Vegas. Buescher finished 3rd at the Charlotte Roval last year and he has had success on the road courses in 2022. Buescher finished 2nd at Sonoma, 6th at Road America, 10th at the Indy Road Course ad 9th at Watkins Glen. Buescher should have a good chance to finish in the top-10 again Sunday.

AUSTIN CINDRIC (2): Cindric has been very good on the road courses this year. He finished 8th at COTA, 5th at Sonoma, 7th at Road America and 2nd at the Indy Road Course. He is also averaging the 3rd most Stage Points on the road courses this year. Cindric won the pole in two of his four Xfinity Series races at the Charlotte Roval and his average finishing position at the track is 3rd in the Xfinity Series. Cindric should have a great chance to finish in the top-10 Sunday.

MICHAEL MCDOWELL (6): There are many different ways to go with your last pick in Group C. AJ Allmendinger, Daniel Suarez, Ty Gibbs and even Cole Custer are in play this week. I want to ensure I get a top-10 finish from this pick so I will use McDowell. He finished 3rd at Sonoma, 8th at Road Course, 8th at the Indy Road Course and 6th at Watkins Glen. I will roll the dice with McDowell at the Charlotte Roval.