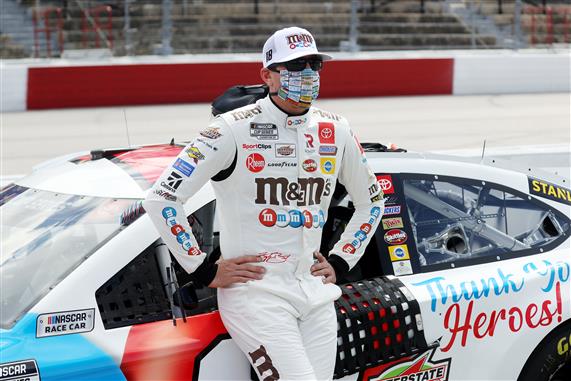 NASCAR is going Old School this week at Darlington Raceway. It is always cool to see the old paint schemes on the cars and remember the days when a runaway tire on pit road would bring out an immediate caution. I guess those days are over. Darlington always puts on a good race; I just wish the race was Saturday night, instead of on Mother’s Day. The Goodyear 400 can be seen Sunday at 3:30 p.m. ET on FS1.

The Driver Group Game picks got off to a horrible start, but they are starting to bounce back now. My teams have been able to climb into the top -10 in all of my leagues. I hope you are able to have the same success. As the weather heats up, I expect the picks to heat up too.

Here are my picks for Darlington …

Other Good Picks include: Kevin Harvick is your race winner if you simply go off of track history at Darlington. Harvick won 2 of the 3 races at Darlington last year and he finished 3rd in the other race. Harvick has not finished outside the top-10 at Darlington since 2012 (10 races). The changes to the 750 aero package should not affect the No. 4 much. I did not pick Harvick because he has not led a lap on an intermediate track this year and he has shown no signs of winning any races. If he runs well Sunday, I will use him in the Southern 500 in September.

Group B Pick: Kyle Larson did not compete in any of the races at Darlington last year. That may be a good thing. The other drivers may try to race the track the same way they did last year in the 550 HP aero package and the extra 200 HP may throw them off their game Sunday. Larson led 284 of the 364 laps, won both Stages and won the race the last time NASCAR raced the high-speed aero package at Darlington. He should be a threat to win Sunday.

Group B Pick: William Byron is on a hot streak right now and I am going to keep using him until he cools off. Byron has finished every race since the Cup Series left Daytona in the top-10. That includes races in the 550 and 750 HP aero packages. Byron finished 12th at Darlington last year. He has a lot more speed in 2021. I will let Byron to dance with the Lady in Black Sunday.

Other Good Picks: Kyle Busch got back to Victory Lane in a race that had his name all over it last week. Can he keep the momentum going to at Darlington? Experience means a lot at Darlington and Busch has 18 races at the Track Too Tough to Tame on his resume with an 11h-place average finishing position. Busch will start up front this week and that should help him out too. I am down to 4 starts with Rowdy. I would use Busch over William Byron if you have 5 or more allocations left with the No. 18 car.

Allocation Save: Austin Dillon has been a good sleeper pick at Darlington. He finished 2nd in the last race at the Track Too Tough to Tame and his average finishing position is 12th in his 9 races at the track. Dillon starts up front, so he should score some Stage points and have a good chance to finish in the top-10 Sunday.

Group C Pick: Ross Chastain will be my pick in Group C. Chastain got off to a slow start in 2021, but he is starting to figure things out now. Chastain finished 14th in his last two races on the intermediate tracks (Kansas and Atlanta) and he finished 15th and 17th in his last two races using the 750 HP aero package. He finished 2nd and 8th in the two Xfinity Series races at Darlington last year, so he knows his way around this tough track.

Other Good Picks: Michael McDowell should not be able to stay up front like he has this year; but he has been good at holding his track position. He started 5th and finished 17th at Las Vegas and McDowell started 3rd at Kansas and finished 13th. He starts 13th Sunday and should be able to stay inside the top-20. McDowell finished 16th and 17th in his last two races at Darlington, so he does know how to keep his car in one piece at this track.