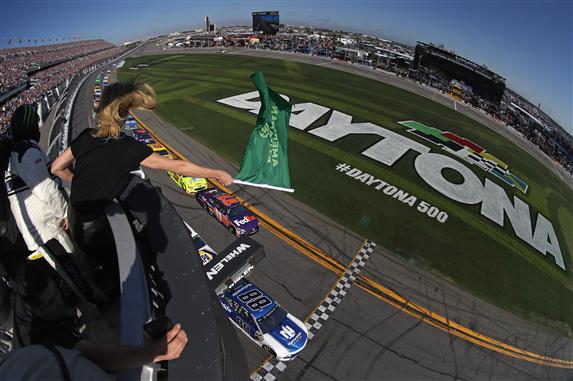 The Monster Energy NASCAR Cup Series will travel back to Daytona International Speedway this week for the Coke Zero 400. It will be the second race of the season at Daytona and the third race on a superspeedway.  The race can be seen Saturday night at 7 p.m. ET on NBC.

The MENCS will have another unique schedule this week. There will be two practices Thursday (2 p.m. ET and 4 p.m. ET), followed by qualifying Friday at 4 p.m. ET. Fantasy players will get to see the two practices sessions Thursday before our rosters lock at 8 a.m. ET Friday. Practice times do not matter much on the superspeedways so I do not expect any changes in my picks this week.

Alex Bowman won the pole for the last race at Daytona. That is not a surprise. Hendrick Motorsports has won the pole in 4 of the last 8 restrictor-plate races. 14 drivers were able to lead laps in the Daytona 500 but most of the race had Ryan Blaney in the lead. He led 118 of the 207 laps and was clearly the most dominant driver. 15 of the 40 cars crashed out of the race. In the end Austin Dillon dumped Aric Almirola on the last lap and won the 60th running of the Great American Race.

This is the week to save allocations. Kyle Busch, Kevin Harvick and Martin Truex Jr. should not be in your Group A lineups. Ryan Blaney, Clint Bowyer, Kurt Busch, Erik Jones and Chase Elliott are off limits in Group B. Alex Bowman can be used for qualifying points but he should not be in your starting lineup Saturday night. Each of these drivers have a great chance to run well at Daytona but their allocations are too important to risk in a race where they do not control their fate. It is tempting to use these drivers but the best strategy is to save them for more predictable races.

Joey Logano (8): Logano is one of the best restrictor-plate drivers in the sport and the best pick in Group A. Logano won the last race at a superspeedway (Talladega) and he enters the race Saturday night with three consecutive top-four finishes on the plate tracks. He has finished four of the last five races at Daytona in the top six. Team Penske has been the best team on the plate tracks since 2015 and Logano will have a great chance to go to Victory Lane for the second time this season.

Denny Hamlin (9): Hamlin is a lot better at Daytona than he is at Talladega. Daytona is more of a handling track and crew chief Mike Wheeler is good at providing Hamlin a car that can work through traffic. Hamlin has led a series-high 140 laps in the last four races at Daytona. He finished third in the Daytona 500 and should be a threat to win Saturday night.

Aric Almirola (8): Almirola came so close to winning the Daytona 500. He drove a great race and it was his first time in the seat of the No. 10 car. Almirola backed up his strong run at Daytona with a 7th-place finish at Talladega. Almirola was very good at the superspeedways even before joining Stewart-Haas Racing. Almirola has finished five consecutive plate races in the top 11. He is one of the best drivers at staying out of trouble and one of the safest picks for your team this week.

Ricky Stenhouse Jr. (7): People say you have to be a little crazy to run well on the superspeedways. Stenhouse either has more guts or less brains than the completion. He often drives his car where he should not go. Stenhouse told Fox Sports, “I learned a lot from Dale Earnhardt Jr. He taught me that you must be aggressive on these tracks and that is the way I drive. If you worry about trouble it will usually find you.” Stenhouse used his aggressive drafting style to win two plate races last year. He will make you very nervous if he is in your lineup but usually he pays off with a good finish for your team.

Paul Menard (7): The one thing the Wood Brothers do better than any other team is setting up a car for the restrictor-plate tracks. It does not matter who is in the car, Trevor Bayne, Ryan Blaney or Paul Menard, you know the No. 21 car will be fast. Menard has been a safe pick on the superspeedways. He has finished six of the last seven races at these tracks in the top 13. Menard finished 6th in the Daytona 500 and he should add another top-10 finish Saturday night.

Austin Dillon (9): Dillon won the Daytona 500 this year and it was not because of luck. Dillon is very good at restrictor-plate racing. He led the series in lead lap finishes until his 2017 season when he found trouble in three of the four races. Dillon has finished three of the last five races at Daytona in the top 10. This is a good week to use an allocation with Dillon and save the top drivers for more predictable tracks.

Darrell Wallace Jr. (8): Wallace Jr. had the best race of his MENCS career in the Daytona 500. He qualified seventh and finished second. Wallace drove the No. 43 car for Aric Almirola in this race last year and he finished 15th. He has never finished worse than 16th on the superspeedways. Crew chief Drew Blinkensderfer is good at setting up a car for the plate tracks. I expect Wallace to have another good run Saturday night.

Michael McDowell (7): It is time to saddle up the McDowell horse whenever the MENCS series competes on a superspeedway. He is always a great choice in Group C at these tracks. McDowell has a habit of finding his way to the front at the end of these races. He is much better at Daytona than he is at Talladega. McDowell has an average finishing position of 10.6 in his last six races at Daytona. He is the second-best choice in Group C this week.

I will post my final picks for Driver Group Game after final qualifying Friday.