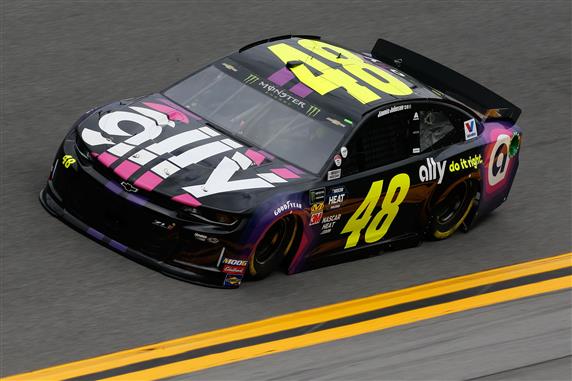 NASCAR will waive the green flag to start the second round of the MENCS playoffs this week at Dover International Speedway. The 12 drivers competing for the championship include: Kyle Busch, Martin Truex Jr., Denny Hamlin, Joey Logano, Kevin Harvick, Chase Elliott, Brad Keselowski, Kyle Larson, Alex Bowman, Ryan Blaney, William Byron and Clint Bowyer. Most of the playoff drivers wrecked each other in the final laps of the playoff race at Dover last year and it really mixed up the standings. Will we see the same Sunday? The Drydene 400 can be seen Sunday at 2:30 p.m. ET on NBC Sports Network.

The cars will have the 750 HP engines with the 2” splitter, 8” spoiler and no aero ducts this week. This is the same aero package they raced at Dover in May. The results from the first race usually translates into speed in the fall because this is a rhythm track and a driver either knows how to turn fast laps or they just get in the way of the drivers who have the rhythm down pat.

Hendrick Motorsports brought fast cars to the Monday race at Dover in May. Chase Elliott won the pole, scored 13 Stage points, led a race-high 145 laps and finished 5th. Alex Bowman qualified 5th, scored 11 Stage points and finished 2nd. William Byron also finished in the top 10 when the No. 24 car crossed the line in the 8th position. In the end it was another dominating performance by Martin Truex Jr. at one of his many home tracks. The No. 19 car won Stage 2, led 132 laps and went to Victory Lane for the 3rd time at the Monster Mile.

Here are my picks for the Monster Mile…

Martin Truex Jr. (4): Truex has about 5 home tracks but he considers Dover his best. He has 3 wins at the track and has led 877 laps in his career. Truex has a lot going for him this weekend. He won the last race at the Monster Mile and he won 2 of the 3 races in the first round of the playoffs. If you have any allocations left with the No. 19 car, Truex needs to be on your team this week.

Chase Elliott (6): There are three drivers I will be watching in practice Friday for the second spot in Group A. Kevin Harvick, Kyle Larson and Chase Elliott are all very good at Dover. I have Elliott penciled in right now because he has momentum after his win at the Charlotte Roval, he won this race last year and he has the best chance to score bonus points for qualifying since the No. 9 car won the pole for the May race at Dover. Elliott could easily make it back-to-back wins in the playoffs, just like he did last year.

Erik Jones (2): If any driver is happy to see the calendar turn to October, it is Jones. He had a rough September. Jones finished 39th at Indianapolis, 36th at Las Vegas, was disqualified from the race at Richmond and finished 40th at the Charlotte Roval. So why is he in my lineup? Well, his name is written in pencil, not pen. The No. 20 team is eliminated from the playoffs. I have a feeling they can relax now and just drive their race. Jones finished 4th in this race last year and 6th at the Monster Mile in May. He should finish in the top 10 Sunday.

Jimmie Johnson (2): When a driver has 11 trophies from a track, you need to have him on your team. While the 11 wins are amazing, what is even more surprising is that Johnson has a 9th place average finishing position in his 35 races at the Monster Mile. Johnson said he could finish in the top 10 at this track in his sleep. I believe him. I plan to roll the dice with the No. 48 car Sunday.

Alex Bowman (5): Bowman had one of the best cars at Dover in May. He qualified 5th, came 2-laps away from winning Stage 2, had a 6.4 average running position and finished 2nd. Bowman has a 9.4 average finishing position on the steep tracks this season (Bristol, Darlington and Dover). He is not making any friends on the track but if Hendrick Motorsports gives him the same car he drove at this track in May (I see no reason why they won’t), Bowman should be fast Sunday.

William Byron (5): There are a few reasons why we need to have Byron in our lineups this week. He is by far the best driver this season at winning the pole so he gives us a good chance to score bonus points for qualifying Saturday. His crew chief (Chad Knaus) has 11 wins at this tracks so he knows how to set up a car to turn fast laps at the Monster Mile and Byron always performs better in his 2nd trip to a track (He finished 8th in May). If Byron looks fast in practice, he will be on my team this weekend.

Matt DiBenedetto (3): DiBenedetto did not have a great race at Dover in May. He qualified 17th and finished 20th. It was the best finish from any Group C driver though. DiBenedetto has performed a lot better later in the summer. He finished 2nd and 12th in the two races at Bristol so he knows his way around the high-banked tracks. I hope I do not need DiBenedetto Sunday, but if I do I know he will finish in the top 15.

Ty Dillon (4): I was planning to use Chris Buescher in this spot but Dillon out-performed Buescher at Dover in May and he has a better finishing position on the steep tracks this season. So I will save an allocation with Buescher and take a chance with Dillon. He qualified 25th and finished 22nd in the May race at the Monster Mile. That was 2nd best from the Group C drivers. Dillon has an 18th-place average finishing position in his last 4 oval races. That is not bad for the No. 13 team.