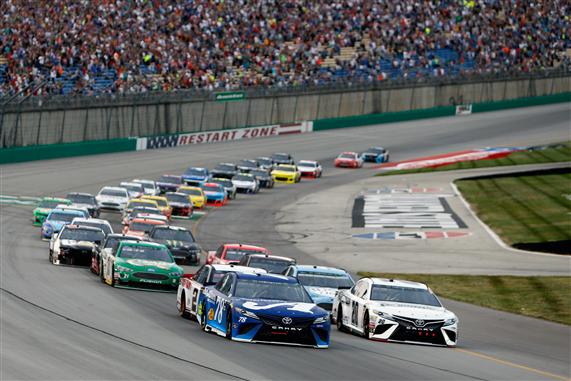 The Monster Energy Cup Series will travel to the Bluegrass State for some Saturday night racing. This track was reconfigured and resurfaces a couple of years ago. Both ends of the track are now completely different and it makes setting up the car very difficult. Crew chiefs who can adjust their cars throughout the race usually finish up front. It should be another exciting race on a 1.5-mile tri-oval track. The Quaker State 400 can be seen Saturday night at 7:30 p.m. ET on NBC Sports Network.

NASCAR will have a condensed schedule this week. There will be two practices and qualifying Friday. The first practice is at 11:30 p.m. ET (NBSN) and final practice will be at 1:30 p.m. ET (NBCS). Qualifying will be Friday evening at 6 p.m. ET (NBSC). Our Driver Group Game picks need to be submitted by 8 a.m. ET Friday.

* NASCAR will inspect the cars Saturday afternoon (around 3 p.m. ET). Any car that fails once will go to the back and be scored from the back in Fantasy NASCAR. Be sure to check the website Saturday evening for my updated picks. I may have to change some drivers depending how the inspection goes.

This week the cars will have the 550 HP engines, aero ducts, 2” splitter and 8” spoiler. This aero package has promoted drafting during the race so practice speeds have not meant as much in 2019 as they have in the past. It will be important to check out the Garage Talk Notes Friday to see which drivers have the best handling cars. These drivers should be the best picks for your Fantasy NASCAR team.

Here are my picks for Kentucky…

Martin Truex Jr. (6): You must have Truex on your team this week. Most people consider the road courses or Charlotte his best tracks but the results at those tracks do not compare to what he has done at Kentucky. Truex has led at least 156 laps, scored almost the maximum bonus points for qualifying, scored the maximum bonus points for the Stages and won both races. Truex dominated the race at Charlotte this season. I expect the same from the No. 19 car Saturday night.

Kevin Harvick (4): I thought about taking a chance with Brad Keselowski or Chase Elliott with my second Group A driver in order to save allocations, but since I know I will use Martin Truex Jr. in the race I am using my second pick for qualifying points. Harvick has won two poles on the 1.5-mile tracks this year and qualified 2nd in another. He should be a lock to start in the top four qualifying position. We will be in good shape if aliens kidnap Truex and we have no choice but to use Harvick in the race. The No. 4 car has not finished outside the top 10 at Kentucky since 2012.

Ryan Blaney (5): Blaney is always good on fast tracks. Kentucky Speedway is one of the fastest intermediate tracks since it was repaved. The surface is smooth and most of the bumps were taken out. Blaney went through a slump in the spring but he is starting to heat up again. He finished 6th at Chicago and this tracks suites his driving style better. Blaney finished 2nd at Kentucky last year. He should be up front again this week.

Alex Bowman (7): Bowman has been too good on the intermediate tracks to fade right now. He has finished the last four races on intermediate tracks in the top 10, including a win at Chicagoland Speedway and a 2nd place finish at Kansas. Hendrick Motorsports has their 1.5-mile track program under control right now and Bowman has been their best driver. I have no problem using another allocation with the No. 88 car Saturday night.

Jimmie Johnson (8): Hendrick Motorsports had NASCAR take their cars to the wind tunnel to compare them with the competition. NASCAR told the team their cars had as much aerodynamic advantage as any other car in the field. So HMS changed to a new motor before the race at Texas. All Johnson has done since the switch is finish 5th (Texas), 6th (Kansas), 8th (Charlotte) and 4th (Chicago). He has never won at Kentucky and he said at Media Day before the Daytona 500 that winning at Kentucky is one of his goals for 2019. I have a feeling the No. 48 car will run just as well at Kentucky as it did at Chicagoland Speedway.

Erik Jones (4): Kentucky ranks as the second best track for Jones. He has finished 6th and 7th in his two MENCS races at the track. Jones has been hit or miss on the intermediate tracks this season. He finished 3rd at Kansas and 7th at Chicago. He also finished 40th at Charlotte and 31st at Michigan. If Jones can stay out of trouble he will finish in the top 10. I think he can since his confidence will be up at one of his best tracks.

Chris Buescher (3): I thought there would be a lot of good choices in Group C before the season began. That has not been the case. Buescher has been the best driver in this group and it has not even been close. I plan to use the No. 37 car on the 1.5-mile tracks and hope to get lucky with one of the other drivers at the other tracks. Buescher has a 13th place average finishing position on the 1.5-mile tracks this season. Not too bad for a Group C driver. I plan to use another allocation with him Saturday night.

Daniel Hemric (2): I am quickly running out of allocations with Hemric but I am not worried about it. I am not using him in the race this week so I only need the No. 8 car for qualifying points. Richard Childress Racing has chosen to trim out their cars for qualifying so they can start up front. It has worked. Hemric consistently qualifies in the top 10 on the 1.5-mile tracks. He has not been able to finish any of the races in the top 15 though. I will use Hemric for bonus points only Saturday night.

I will post my final picks for Driver Group Game Friday evening but be sure to check back Saturday evening to see if I made any changes after NASCAR inspection.