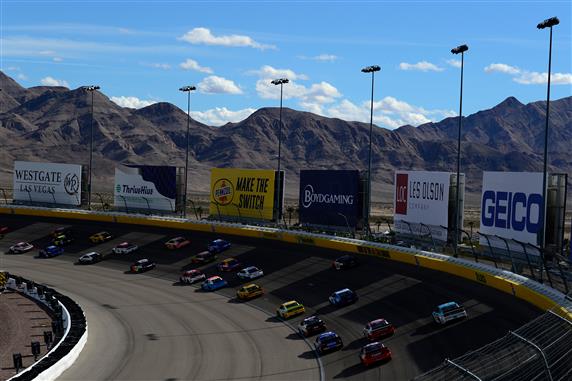 It took an extra day but the Daytona 500 is in the books and now the “real season” starts. The Cup Series will have their work cut out for them this week as they travel across the country to Las Vegas. It is always a logistical nightmare for teams to prepare for the west coast races but now they have one less day to get the cars loaded and on the road. Las Vegas is a worn out, bumpy track so the racing should be pretty good. The Pennzoil 400 can be seen Sunday at 3:30 p.m. ET on Fox.

The first race after Daytona is the toughest to predict because we do not know which team made gains over the offseason and which may have lost some speed to the competition. It would be a good idea to use a combination of drivers from the different manufacturers so you have the best chance to have the fast cars in your lineup.

Joey Logano (7): Las Vegas is one of the best tracks for Team Penske. Logano won this race last year and it would not be a surprise if his No. 22 Pennzoil Ford won the Pennzoil 400 again Sunday. Logano has finished 9th, 1st, 4th, 7th,4th, 2nd, 10th and 4th at Las Vegas since joining Team Penske. He is almost a lock for another top 10 finish this week. Last year Logao finished 1st, 2nd, 1st and 3rd in the four Stages in the two races and he led 191 laps. Logano should score a lot of bonus points and be the best pick from Group A.

Kevin Harvick (8): I needed to decide between Martin Truex Jr. and Harvick for my 2nd Group B driver. Truex won the last race at Las Vegas and it would be a good idea to have one Ford and one Toyota in your lineup but I could not ignore Harvick’s stats at this track. The No. 4 car finished 2nd and 4th in the two races at Las Vegas last year. Harvick also won the pole and finished 1st, 2nd, 2nd and 4th in the Stages, while leading 135 laps. His 40 Driver Group Game points per race on the 1.5-mile ovals were a series-best, while Logano ranked 2nd with 39 points per race. The No. 4 and No. 22 are the two best picks this week.

Kyle Larson (8): Las Vegas is one of the best tracks for Larson so this would be a good time to get him into your lineups.  He has finished four of the last five races at the track in the top eight. It would have been five-for-five it he did not have a late race pit penalty last year. Larson is historically gets off to a hot start and after his Chili Bowl win earlier this year, I am sure he will have the momentum to compete for a win Sunday.

Ryan Blaney (8): I am sticking with Team Penske for my 2nd pick in Group B. Blaney has finished 5th, 22nd, 5th, 5th, 7th and 6th at Las Vegas since he has been in a Wood Brothers or Team Penske car. His crew chief, Todd Gordon, won this race last year. I am sure Gordon will give Blaney a car that has a lot of speed this week. We need to manage our allocations wisely with Blaney but we cannot have too many Team Penske drivers in our lineups this week.

William Byron (8): When I looked back at the Garage Talk notes for the last race at Las Vegas I noticed that the No. 24 car unloaded with the most speed. Byron was 2nd fastest in the 1st practice and then Chad Knaus worked to fine tune the car. Byron had a good race. He finished 7th in Stage 1, 6th in Stage 2, led 6 laps and finished 7th. I am sure Knaus will have a lot of notes to ensure Byron has what he needs to run up front again Sunday. He is a great sleeper pick for Group B this week.

Aric Almirola (7): Almirola always gets off to a hot start and then cools off over the summer. Last year he rattled off six consecutive top-nine finishes after the Daytona 500. I expect the No. 10 car to start off well again in 2020. Almirola has finished 13th, 7th, 6th and 10th at Las Vegas since joining Stewart-Haas Racing. I doubt he has a chance to win but his car should be fast enough to finish in the top 10 this week.

Christopher Bell (8): I am saving the three top rookies (Christopher Bell, Cole Custer and Tyler Reddick) for the 10 1.5-mile tracks this season. Bell had a lot of success in the Xfinity Series at Las Vegas. Last September he qualified 2nd, won both Stages, led 154 of the 200 laps and finished 2nd. He finished in the top-four in three of his four races at the track. Bell also finished in the top four in every Stage at Las Vegas in the Xfinity Series. The No. 95 car should be a good pick for Group C.

Cole Custer (8): I had to debate between Tyler Reddick and Custer for my 2nd driver fro Group C. Reddick won the last Xfinity Series race at Las Vegas but he also finished 14th and 28th in his prior trips to Sin City. Custer has been more consistent and his Stewart-Haas Racing Ford should have more speed. There is a good chance Custer can score bonus points for qualifying too. He won the pole for the last three Xfinity Series races at Las Vegas. You cannot go wrong with Bell and Custer in Group C this week.