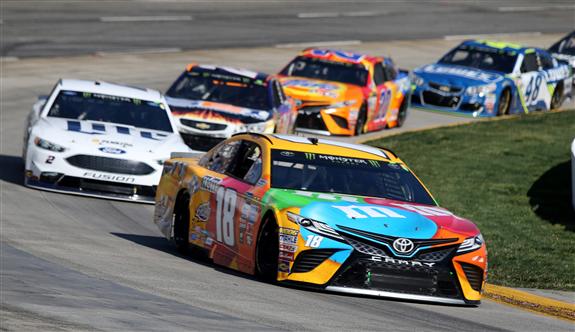 The Monster Energy NASCAR Cup Series will compete at Martinsville Speedway this week in the STP 500. It will be the first race at a true short track. It will be interesting to see which teams will step up this week now that downforce and aerodynamics will not be as important. The race can be seen Sunday at 2 p.m. ET on Fox Sports 1.

My Driver Group Game picks were pretty good for four weeks, but they crashed and burned at Auto Club Speedway. I do not regret picking Kevin Harvick for the race. I still think it was the right decision. He had the fastest car in all of the practices, in the 5-lap, 10-lap, 15-lap and 20-lap average speed charts and he broke the track record. Sometimes you run into bad luck in Fantasy NASCAR and I think that is what happened Sunday. There is plenty of time to get the points back.

Last year Kyle Busch was the most dominant driver in this race. He led 274 of the 500 laps. Busch was leading the race at the end of Stage 2 when Ricky Stenhouse Jr. decided to move Busch out of the way to get back on the lead lap before the caution to end the Stage. The No. 2 Miller Lite team worked on their car the entire race and at the end Brad Keselowski had the car to beat. Keselowski outraced Busch to the checkered flag to win his first Grandfather Clock.

Martinsville is a .5-mile flat paperclip shaped track. There is no track on the circuit where track position means as much as it does at Martinsville. It is very tough to pass here. The drivers who can out-brake the competition and get into the throttle quickly out of the corners are the drivers to beat. It is a rhythm track and drivers either are very good at it or they will struggle all race long. There is little middle ground at the tough paperclip.

This is a very unpredictable race. A driver could lead 300 laps and get dumped at the end of the race and finish outside the top 20. I do not want to risk too many of my top drivers in this race so I will be taking some chances in Group B and Group C this week. I just think you need to save your top drivers for more predictable tracks.

* The weather forecast for Martinsville is not looking good. It is supposed to rain all day Saturday, so all of the practice sessions and qualifying could get canceled. The rain is forecasted to end Sunday morning, so hopefully we can get the race in Sunday afternoon.

Kyle Busch (9) is pissed and that could be mean trouble for the field this week. Busch has finished 2nd, 2nd and 3rd in his last three races and he believes he should have three wins on his 2018 resume. Now the series competes at a track where Busch has dominated the last four races. Busch has lead 813 laps and has an average finishing position of 2.2 in his last four races at Martinsville. Busch will be a man on a mission this week. I would hate to be the driver in his way as they come to the checkered flag.

* If you want to go for maximum points this week, I suggest pairing Joey Logano with Kyle Busch. The Driver Group Game awards 10 bonus points to the driver who wins the pole. That driver is likely to be Logano. The No. 22 car has won 4 poles in his last 6 starts at Martinsville. Logano has started on the front row in 6 of the last 7 races. No driver can qualify at the tricky paperclip as well as Logano. Right now it looks like it will be hard for NASCAR to get qualifying in Saturday so I went with Brad Keselowski instead.

Chase Elliott and Ryan Blaney are great choices this week, but I am saving them for more predictable tracks. Elliott will be without his car chief so I see no reason to take a risk with him. I expect Elliott to run a lot better in the summer so I will use his allocations in those races. Blaney will be good, but we only get 9 allocations with him. I think there are better races to use the No. 12 car.

Clint Bowyer (9) will be in my starting lineup this week. Martinsville is his third best track. Bowyer finished 3rd and 7th in the two races at this track last year. He has been one of the surprise drivers in the 2018 season. I expect the No. 14 team to continue to run well this week. By having Bowyer as a lock for a starting position, it allows me to take a chance on my three remaining drivers and hope one of them looks good in practice.

Austin Dillon (9) won the Daytona 500 but he is running under the radar this season. Dillon has the 9th-best average finishing position this season (11th) and the 7th-best driver rating (91.9). Dillon always runs a lot better in the spring races at Martinsville then he does in the fall races. Dillon finished 4th and 5th in the last two spring races at the paperclip-shaped track. All of the stats suggest he should run well this week so I will take a chance with the No. 3 car.

AJ Allmendinger (9) is in my lineup this week! Surprised? You shouldn’t be. This is Allmendinger’s best track. Most people think Allmendinger is only good at the Road Courses. The only drivers better at out-braking the competition in the corners then Allmendinger is Jimmie Johnson and Kyle Busch. Allmendinger has finished 6 of his last 8 races at Martinsville in the top 11. The only races he failed to finish in the top 11 was in 2014 when his engine expires (He was with Phoenix Racing at the time) and last October when Danica Patrick wrecked him. “Miss. Crash the Field” is no longer in the race, so Allmendinger should be a good pick Sunday.

Ryan Newman (9) is my insurance policy this week. If Austin Dillon and AJ Allmendinger do not perform well in practice or qualify deep in the field, I know I can pair Newman with Bowyer and be alright in the race. Newman will not score a top-five finish this week. The chances of the No. 31 car finishing outside the top 15 are slim as well. Newman always runs between 8th -15th at this track. I will take those results from him if it means I can save my allocations with my top drivers in Group B.

I am treating this race as a Superspeedway and fading the top drivers in Group C. Experience means a lot at this track because drivers need to figure out the rhythm to get in and off the gas. William Byron and Darrell Wallace Jr. do not have any experience in a MENCS car at Martinsville. I think they will have a rough race Sunday. Alex Bowman has competed here but his average finishing position is 30th. I am already running low on allocations with Bowman so I will save him for the larger tracks.

Michael McDowell (8) has competed in 14 races in the MENCS at Martinsville. He hasn’t been too bad. McDowell’s average finishing position in the last four races at Martinsville is 21st. I doubt Alex Bowman, William Byron or Darrell Wallace Jr. will be much better then 21st this week. I will lean on experience this week and hope it pays off.

Chris Buescher (9) is a good sleeper pick for the STP 500. He has five races in the MENCS at Martinsville on his resume. Buescher finished 11th in this race last year and 21st in the October race. I expect Buescher to lean on his teammate (AJ Allmendinger) this week for advice. The two worked well last year at the Road Courses and I think Allmendiger’s advice helped Buescher finish 11th last year. I would love to get an allocation out of Buescher this week and save my top drivers in Group C for more predictable tracks.