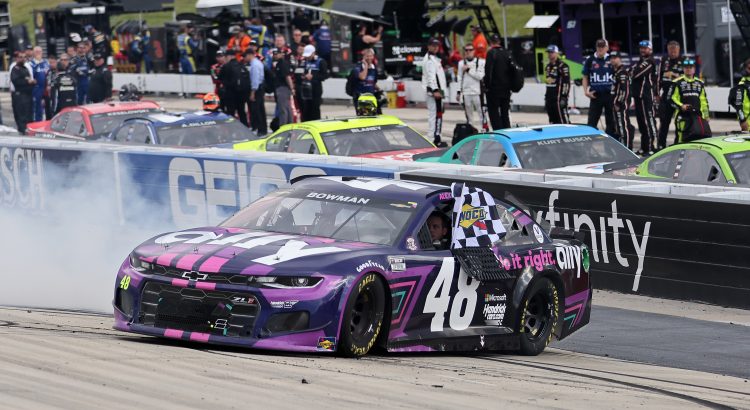 The Cup Series will compete at Nashville Superspeedway for the first time this week. That means NASCAR is giving the teams time to practice and qualify for the race. That means we get to see the practice Saturday (2 p.m. ET on NBCSN) before our lineups need to be submitted (Sunday at 8 a.m. ET). I will post my updated picks after practice Saturday afternoon and then post my final picks after qualifying Sunday. I know some of you will not have time to check back so I want to post my picks now before the cars post any laps Saturday.

Before I get into the picks for Fantasy Live, let me discuss allocations…. I know many of you are worried about running out of allocations with Kyle Larson and other top drivers but believing in momentum has won me many Fantasy NASCAR championships. Last year Denny Hamlin finished 1st, 2nd, 2nd, 2nd and 1st over the summer. Everyone was worried about using up his allocations. Hamlin faded later in the summer and had an 11th place average finishing position after that hot streak. Kevin Havick won 8 of the first 27 races last year. Everyone wanted to save some allocations with the No. 4 car for the playoffs in other games. The No. 4 team went into a slump in the playoffs and did not even make the final 4. Momentum changes quickly in NASCAR so when a team is on fire like Hendrick Motorsports is right now… we need to use their drivers. Even if we run out of allocations. A win from Kyle Larson right now counts just as much as a win in the August.

Here are my early week picks for Ally 400…

Chase Elliott (4): How can you fade any Hendrick Motorsports driver right now? They clearly have an advantage on the field. The track most similar to Nashville is Dover and all four Hendrick Motorsports drivers took the four top finishing positions, with Chase Elliott finishing 3rd. I have four allocations left with Elliott and I need three for Road America, Watkins Glen and the Indianapolis Road Course. I plan to use the other one this week at Nashville.

Allocation Saver Kevin Harvick (7): Kevin Harvick should be a good pick this week. It feels weird to list the No. 4 car in the Allocation Saver category but I haven’t used Harvick much this year. If you believe in track history, Harvick is your driver this week. He finished 1st, 3rd and 1st in his last three races at Nashville in the Xfinity Series. Harvick also finished 6th at Dover and Darlington this season, so he has run well in the 750 HP aero package. I will see how fast the No. 4 car is in practice before I decide to use Harvick this week.

Kyle Larson (2): I am down to two allocations with Kyle Larson but I am not worried about it. The No. 5 car is smoking the competition right now. Larson finished 1st, 1st, 2nd, 2nd and 2nd in his last 5 races. He also just won the All-Star Race. The most similar track to Nashville is Dover and Larson led 263 laps and finished 2nd in that race. I am playing Larson while he is on fire. A win in June is worth the same as a win in October.

William Byron (2): William Byron does not have the wins or 2nd-place finishes that Kyle Larson has, but he has been more consistent. Byron finished every race since February in the top-11. The two tracks most similar to Nashville are Dover and Darlington. Byron finished 4th in both of those races. I am not so sure Byron will stay red hot all season so I will use my allocations with the No. 24 car while Byron is almost a lock for a top-10 finish.

Alex Bowman (7): The word in the garage is that Nashville will race a lot like Dover. If that is true, we need to have the winner of the race at Dover in our lineups Sunday. Alex Bowman started 16th, led 98 laps and went to Victory Lane at Dover. I cannot fade the Ally car in the Ally 400. Bowman won 2 of the last 3 races in the 750 HP aero package on oval tracks (Dover and Richmond). He will have a good chance to add win No. 3 to his 2021 resume on Father’s Day.

Kyle Busch (3): Kyle Busch is the driver I had penciled for Nashville before the season started. I still remember Busch winning the Xfinity Series race at Nashville and smashing the guitar trophy in Victory Lane and causing people to lose their mind over his immaturity. Well, at least he has grown up since then… or maybe not. Busch has more experience at Nashville than any driver in the field. He has 10 starts in the Xfinity Series and two starts in the Truck Series at Nashville. He won 3 races and finished his last 6 races in the top-three. Busch should be a good pick again Sunday.

Allocation Saver Tyler Reddick (8): Tyler Reddick will be a good driver to use and allow you to save your top drivers for other tracks. Reddick has run well lately. His average finishing position in his last five oval track races is 9th. That includes an 8th place finish at Dover. If Reddick looks fast in practice, I will add him to the lineup.

Allocation Saver Austin Dillon (8): Austin Dillon could be a good driver for your lineup this week. He competed in both of the Xfinity Series races at Nashville in 2011. He finished 3rd in both races, so at least he has some experience and some success at the track. This could be a good race to use an allocation with the No. 3 car. I will wait and see how Dillon looks in practice before I make my final decision.

Ross Chastain (7): Ross Chastain is starting to show some improvement in the No. 42 car. He finished 15th at Dover and Darlington so he has been a decent pick for Group C in the 750 HP aero package. Kurt Busch (his teammate) participated in a tire test at Nashville so Chastain will have some notes to work with this week. If he looks fast in practice, Chastain will be in my lineup.

Daniel Suarez (7): I have Daniel Suarez list as one of my Group C drivers based on what he did at Dover. Suarez started 24th and quickly made his way through the field. He had an 11.4 average running position and finished 9th. The speed from Dover should translate into speed at Nashville. I will be keeping an eye on Suarez in practice and if he looks fast, the No. 99 car will be in my lineup.

Allocation Saver Chase Briscoe (8): Chase Briscoe has not been very good this year but this could be a breakout race for him. Briscoe participated in the Goodyear tire test at Nashville so he will have more seat time than most of the competition. I will see how fast the No. 14 car is in practice before I decide to use him in my lineup Sunday.

Be sure to check back Saturday evening for my updated picks.