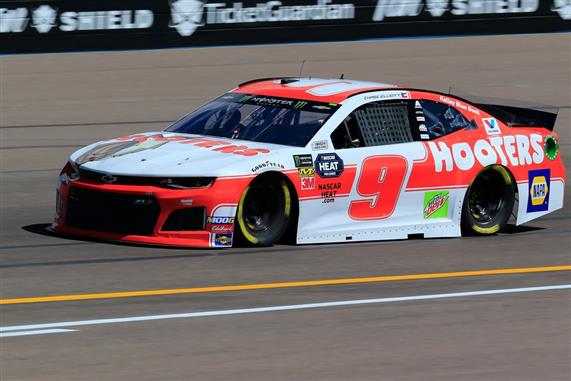 The MENCS will travel across the country this week to compete in Phoenix (ISM Raceway). This is the most important race for the playoff drivers because it is their last chance to punch their ticket to the championship race at Homestead. Martin Truex Jr. and Kevin Harvick have their spot reserved. Who will be the two drivers to join them? The race on the reconfigured ISM Raceway is always exciting. I expect the same this week. The Bluegreen Vacations 500 can be seen Sunday at 2:30 p.m. ET on NBC.

* I will provide Garage Talk Notes this week but the article will only consist of stats to help your prepare for the race. I will not be available Friday night to monitor the radios and get info from the Garage.

** Once again we get to see two practices before our lineups need to be set at 8 a.m. ET Saturday morning. I will check the practice speeds Friday night and will post an updated lineup if there needs to be any changes.

* I am out of allocations with Kyle Busch and Kevin Harvick. These two drivers would be my picks if I could use them in the race.

Martin Truex Jr. (4): Truex is already locked into the championship race at Homestead so he does not have much to race for. I still expect the No. 19 team to show up with a lot of speed and run up front so they have some momentum for next week. Truex has been the best driver on the short flat tracks this season. He swept the races at Richmond, finished 2nd at Phoenix in March, won at Martinsville and finished 6th at New Hampshire. The short track program for the No. 19 team is too good to ignore so I will have Truex on my team this week.

Kyle Larson (7): The last spot in Group A was a choice between Joey Logano, Chase Elliott and Kyle Larson. I expect Logano and Elliott to be good but I went with Larson because he has been more consistent then Logano and Elliott in the playoffs. Larson does not have a great track history at Phoenix but his car really came to life once they reconfigured the track. Larson finished 3rd and 6th at ISM Raceway after the dogleg was added to the front-stretch. Kurt Busch said last week that he will do everything possible to help Larson will at Phoenix. That knowledge could be what Larson needs to get to Victory Lane Sunday.

* I am out of allocations with Ryan Blaney, Kurt Busch and Clint Bowyer. I would use Blaney and Busch over Ryan Newman and William Byron if I could.

Denny Hamlin (1): Hamlin dug himself a hole after he slide threw the grass at Texas. Hamlin is 20 points behind Joey Logano for the final spot in the championship race. He needs a win or a top 5 finish and I am sure Joe Gibbs Racing will ensure it happens. These Toyotas have dominated the short, flat tracks this season. Hamlin finished 5th in the first race at Phoenix, 5th and 3rd in the two races at Richmond, 4th and 5th at Martinsville and 2nd at New Hampshire. The No. 11 car is almost a lock for a top-5 finish Sunday.

Aric Almirola (2): Almirola is a hard driver to trust but I am willing to use him this week after his solid performance at Texas. Almirola has been the 3rd-best driver at Phoenix since the track was reconfigured. He finished 4th in the playoff race last November and he finished 4th in March. Almirola should be a safe pick since he has never finished outside the top 10 at Phoenix in a Stewart-Haas Racing Ford.

Ryan Newman (5): Newman is at his best on the short, flat tracks. The No. 6 car finished 12 in the spring race at Phoenix, 5th and 9th at Richmond and 7th at New Hampshire. Newman was in Victory Lane at this track only two years ago so he has to have a little extra excitement heading into the race Sunday. I do not expect the No. 6 car to qualify up front but I do expect Newman to finish in the top 10 again at Phoenix.

William Byron (4): I do not have many good options for the last spot in Group B. My choices were Jimmie Johnson, Erik Jones and Byron. This is not a good track for Jones and Johnson heads into the race after finishing 34th or worse in 3 of the last 4 races. So Byron gets the spot. I like the No. 24 car because he will likely compete for the pole and have a good chance to finish in the top 10. Byron finished 2nd last month on the short, flat track at Martinsville and he finished 9th in this race last year. I will take a shot with Byron Sunday.

* I am out of allocations with Chris Buescher and Daniel Hemric.

Ty Dillon (2): Dillon will be my 2nd driver in Group C. I do not expect to use him in the race but he should be a decent backup to DiBenedetto. Dillon ran OK in the 2 races at ISM Raceway after the track was reconfigured. He qualified 28th and finished 19th last November and Dillon qualified 20th and finished 15th in March. He has finished 5 of the last 6 races at this track in the top 19. I doubt he will finish in the top 15 but a finish between 16th and 19th should be good for the No. 13 car Sunday.