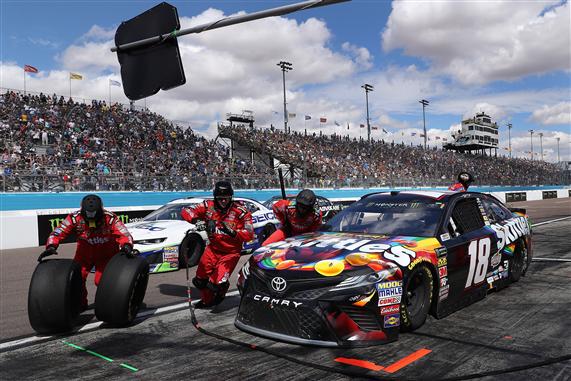 The Cup Series will complete the “West Coast Swing” this week when they compete at ISM Raceway (Phoenix). The track was reconfigured in 2018 and it really made the racing exciting. The “dogleg” is now on the front stretch so we will see drivers taking a short cut through the apron to beat their opponents to the checkered flag. It could get wild this week. The Fan Shield 500 can be seen Sunday at 3:30 p.m. ET on Fox.

The racing on the short tracks was not good with the 550 HP aero packages last year. NASCAR decided to go back to the 2017 and 2018 aero package on these tracks. That means we can forget what we saw last year at Phoenix and focus on the results from 2017 and 2018. This is the No. 1 track on the circuit for practice speeds resulting in up front finishes in the race. Many teams take two tires and the time to adjust your car on pit road is limited. Most team have what they have in the race, so make sure you load your starting lineup with drivers who performed well in practice.

Kyle Busch: It was no secret that Busch hated having a parachute on the back of his car at the short tracks last year. Well, the 8” spoiler and 2” splitter are gone and now the racing is back in the driver’s hands. That is great news for Rowdy. He finished 1st and 2nd in the last two races using this aero package and led over 115 laps in both races. I will be shocked if Busch does not run up front Sunday.

Kevin Harvick: The No. 4 team has lost some of their dominance at Phoenix since the start / finish line was moved. But are we really worried about his results. Harvick has a 3.4 average finishing position in his last 16 races at Phoenix. No driver dominates a track the way Harvick does in the desert. I thought about pairing Martin Truex Jr. with Kyle Busch but I do not want all of my eggs in the Joe Gibbs Racing basket. I feel confident with Busch and Harvick in Group A this week.

Kyle Larson: Larson has been good at Phoenix and even better at the track in the aero package that will be used Sunday. Larson finished 3rd in the last race at Phoenix in the current aero package and I am sure his crew chief saved his notes. Larson also won at Richmond with this package. I have not used any allocations with the No. 42 car yet this season so I have no problem having him available this week.

Kurt Busch: Busch has always been one of the best drivers on the short, flat tracks. He will have momentum after his top-five finish last week at Auto Club Speedway. He has been a boom or bust driver at Phoenix but his poor finishes were not his fault. Busch has the 3rd-highest driver rating from the Group B drivers in the last 6 races at Phoenix. It is risky selecting two drivers from Chip Ganassi Racing but I have confidence in both cars Sunday.

Erik Jones: I was worried about the Joe Gibbs Racing cars heading into the race last week but after Kyle Busch, Denny Hamlin and Erik Jones finished in the top 10 at Auto Club, I am not so worried any more (Martin Truex Jr. also ran well in the race). Jones ran a lot better in 2017 and 2018 at Phoenix than he did with the huge spoiler on the car last year. Jones finished 8th, 4th, 9th and 17th (had a speeding penalty) in his 4 races using the current aero package at Phoenix. The No. 20 car should finish in the top 10 in the Fan Shield 500.

Ryan Blaney: Blaney is my insurance policy this week. I hope I do not need to use him because I have already used two allocations with the No. 12 car. Blaney is my pick to win the pole so he should score us bonus points even if we do not use him in the race. Blaney is just running too well right now to ignore. We know how Team Penske Racing fell off a cliff once the tracks heated up in the summer. I am using my allocations with Blaney while the team is on a hot streak.

Ty Dillon: I thought about using another allocation with Ross Chastain while I had a chance but Phoenix is by far his worst track. He has never finished inside the top 17 in the Xfinity Series so it is hard to imagine him running well in the Cup Series. Instead, I will use Dillon. The No. 13 team finished 16th, 11th, 30th (radiator problem) and 19th in his 4 races using the current aero package. Germaine Racing has a closer alliance with Richard Childress Racing than they had in 2018 so I expect even better results from Dillon Sunday.

Ross Chastain: I would not have Chastain in my lineup if allocations were not an issue. Chastain has not had much success and Phoenix and the track ranks as his worst on the circuit. He has never been in a decent car though. I trust Ty Dillon so I will select Chastain and see how he performs in practice. (This pick also has a lot to do with the poor performance so far this season from Christopher Bell and Cole Custer. I will use them once they get more experience) 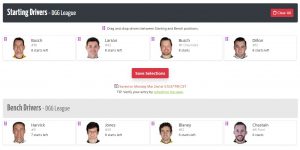