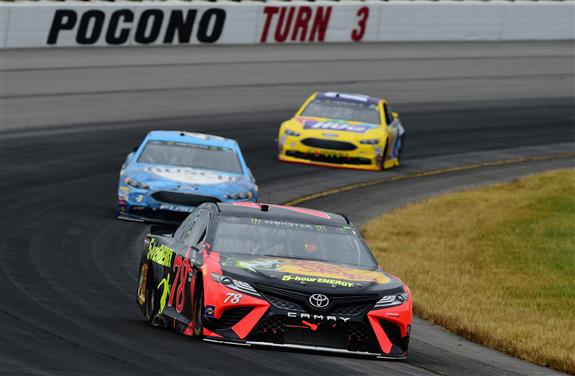 The Monster Energy NASCAR Cup Series will return to Pocono Raceway for the Gander Outdoors 400. This will be the second race at the Tricky Triangle in the last seven weeks. The race can be seen Sunday at 2:30 p.m. ET on NBC Sports Network.

The MENCS will have their condensed schedule this week. They jammed all of the MENCS practices and qualifying into one day (Saturday). They also will have Xfinity Series qualifying and the race Saturday. Since the schedule is so condensed, I will not have time to post DraftKings Xfinity Series picks Saturday. I will have the picks for the other games posted Saturday night.  Our Driver Group Game Lineups need to be set by 8 am ET Saturday morning.

Ryan Blaney won the pole for the last race at Pocono. The No. 12 led the first 11 laps before Martin Truex Jr. took over the lead. The No. 78 car won Stage 1. Kevin Harvick took the lead to start Stage 2. The No. 4 car dominated most of the race, leading 89 of the 160 laps before Kyle Busch took the lead on the restart with 32 laps to go. Busch led 13 laps before Truex was able to regain the lead. Truex led the final 14 laps on his way to Victory Lane.

We can learn a lot by simply watching the last race at Pocono. Usually there is a change in power between the first race at Pocono to the second trip to the Tricky Triangle. Last year people were asking if Toyota would ever win a race before the series headed into Pocono for the first race. By the time the series returned to Pocono, people were asking if Toyota would ever lose a race again. We have not seen a big change between the teams at the top and teams at the bottom this year. Stewart-Haas Racing, Joe Gibbs Racing and Furniture Row Racing have been the top teams since the green flag dropped at Daytona and it has not changed. I expect these teams to continue to dominate throughout the season.

Kevin Harvick (3): Kevin Harvick had the most dominant car in the last race at Pocono. My allocations with the No. 4 car are running low and I know I need to keep one of them for Phoenix. Pocono ranks as the 3rd-best track for Harvick so he gets a spot on my team this week. Since joining Stewart-Haas Racing, Harvick has finished 4th, 2nd, 2nd, 4th, 9th, 2nd, 2nd and 14th at the Tricky Triangle. He has not won a race at Pocono while driving for SHR but he has a 4.8 average finishing position. I will use Harvick over Kyle Busch this week and hope Busch does not try to repay him at the Tricky Triangle.

Martin Truex Jr. (5): Truex won the race at Pocono in June but he did not have the best car. Truex ran most of the race in the 5th position but crew chief Cole Pearn worked his magic and made the No. 78 car sporty for the end of the race. I expect Truex to be fast again this week. Truex has finished the last two races at Pocono in the top 3 and led 31 laps in both of them. He is almost a lock for a top 3 finish again this week.

Ryan Blaney (3): Blaney had the best car from the Group B drivers in the last race at Pocono and he should be the best driver from this group Sunday. Blaney won the pole and led 11 laps on his way to a 6th-place finish. Blaney won his only race in the MENCS at Pocono so he has to be motivated to come back to the track where he went to Victory Lane. Blaney is coming off a 2nd-place finish at Kentucky and a 7th-place finish at New Hampshire. The momentum should continue with the No. 12 team at the Tricky Triangle.

Kurt Busch (3): I thought about using Clint Bowyer in this spot because he had the 5th-best average running position in the last race at Pocono but the No. 14 team keeps shooting themselves in the foot while the No. 41 car continues to dominate races. Busch won at Pocono in 2016 and he has 3 career wins at the Tricky Triangle. A friend who knows people who work at Stewart-Haas Racing told me that SHR has put Tony Gibson in charge of the No. 41 and No. 10 cars to help them get to Victory Lane and secure their spot in the playoffs. Having Gibbson focusing on the setup of these cars and Greg Zippadelli overseeing the engineering, how can they be slow? I expect Busch to be a threat to win the pole and finish in the top 5 this week.

Aric Almirola (7): I keep selecting Almirola for my team but I continue to leave him on my bench. I need to stop doing that. Almirola is not the driver who drove the No. 43 car in the past. He is a good driver in a good car and we need to get him into our starting lineup. Almirola does not have great stats at Pocono but I am not worried about what he did at the Tricky Triangle in the past. He finished 7th in his first race in the No. 10 car at the track and looked ran well in the race. Almirola finished 8th at Kentucky and 3rd at New Hampshire. He will have some momentum heading into the race this week.

Chase Elliott (5): It really hurt watching the race last week knowing Elliott was on my bench. The No. 9 team is starting to show some improvement and it may be time to start using Elliott in our starting lineups. Elliott has run well at Pocono in his career. He has finished 4 of his 5 career starts at the track in the top 10. That includes a 10th place finish at the track in June. Elliott had the 7th-best average running position in the last race at Pocono so his car had good speed. I feel comfortable using an allocation with Elliott this week.

David Ragan (8): I have to take some chances in Group C this week. Pocono is one of the worst tracks for Alex Bowman (He has never finished inside the top 25) and William Byron is not much better. Ragan ran well in the first race at Pocono and he should be decent this week. Ragan qualified 21st and finished 16th  at the Tricky Triangle in June. That was the 2nd race for the No. 38 team with full support from Roush Fenway Racing. I will gamble with Ragan this week.

Chris Buescher (6): Buescher won the race at Pocono in 2016. Yes the race was shortened by fog but the team still put Buescher in position to win. He has been pretty good at the Tricky Triangle in his career. He has finished 17th, 28th, 19th and 1st in his last 4 races (16.2 average finishing position). I will gladly take a top 20 finish from Buescher this week.