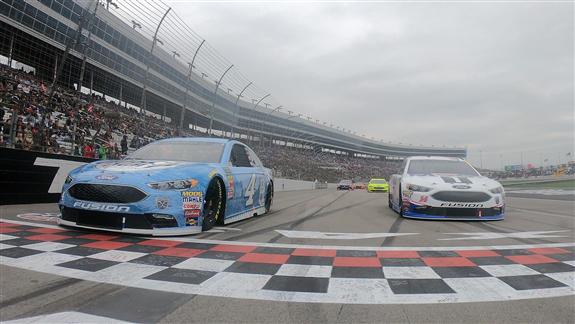 It will be back to a normal schedule for the MENCS this week. The first practice will be Friday at 3 p.m. ET and qualifying will be at 6:30 p.m. ET (FS1). There will be two practices Saturday for the teams to dial in their cars. The first is at 9 a.m. ET and final practice is at 11:30 a.m. ET. Our lineups must be set by 7 a.m. ET Friday. Do not forget.

Ryan Blaney won the pole for the last race at Texas. He led 40 laps and finished second. Kevin Harvick took over the race halfway through Stage 1. Harvick won both Stages, led 177 laps and won the race. Joey Logano also ran well and Kyle Busch had problems with loose wheels throughout the race. The No. 18 team will not be bringing the same tire changer to the track this week.

Kyle Busch (8): Busch has been on fire this season. He has finished 3rd, 1st, 1st and 3rd in his last 4 races. It is hard to fade a driver running this well. Texas is not his best track but Busch has had some success in the Lone Star State. He won the spring race in 2016 and went back to Victory Lane at the track last year. I have not used any allocations with Busch this season and that will change Sunday.

Kevin Harvick (6): Rodney Childers told SiriusXM NASCAR radio before the race at Auto Club, “We know what we need to get the speed we had last year but all of our cars for the west coast are already prepared. We will make the changes for Texas and begin to get back to the dominance we had in 2018.” Sounds good to me. Harvick has finished 1st, 2nd and 1st in the last 3 races at Texas. He has also qualified 1st and 2nd in the two races using this aero package this season, so the No. 4 car should score some qualifying points.

Kurt Busch (8): Busch has been one of the surprise drivers of the 2019 season. Most people expected Busch would not perform as well with his new team as he did last year. He has not missed a step. Busch has finished 3rd, 5th and 6th in the 3 races using the current aero package. He should run well again Sunday. Busch finished both races at Texas last year in the 7th position. He has also won the pole in 2 of the last 3 races at the track so maybe he can score us some bonus points for qualifying.

Ryan Blaney (6): The faster the track, the better Blaney performs. The No. 12 car almost won the last race at Texas. Blaney won the pole, led 40 laps and was chasing down Kevin Harvick at the end of the October race at the track. Blaney finished 5th at Auto Club using this aero package so the No. 12 team has had speed this year. I expect Blaney to finish in the top 10 Sunday.

Aric Almirola (5): Almirola has finished in the top 10 in every race since Daytona. He also finished the 2018 season with 6 straight top-11 finishes. Almirola has been one of the most consistent drivers in the garage since the playoffs began last year. I am not so sure he will continue to run this well all season so I will keep using him until he cools off.

Erik Jones (8): Texas is one of the best 1.5-mile tracks for Jones. He finished both races in the Lone Star State in the 4th position last year. Joe Gibbs Racing has had a lot of speed this season and I expect that to continue this week. Jones has yet to hit his stride this season, but he could easily have one of his best races of the season at one of his best tracks Sunday.

Chris Buescher (6): This will be a home race for Buescher. The driver from Prosper, Texas always performs well at his home track. Last year he qualified 18th and finished 15th in this race. The No. 37 team has more speed this year than they had in 2018. Buescher has performed well using the current aero package. He finished 9th at Atlanta, 18th at Las Vegas and 16th at Auto Club. I will gladly take a top 20 finish from Buescher this week.

Matt DiBendetto (8): DiBenedetto told SiriusXM NASCAR Channel last week, “Something clicked during the practice at Auto Club. My crew chief (Mike Wheeler) would tell me to try stuff and I did not exactly understand what he meant. Denny Hamlin explained it to me and now I got it. When you race for an underfunded team you do not try the stuff the big guys do. Now I know what to try to get speed.” DiBenedetto had his best finish (18th). He also finished 20th at Martinsville (His worst track). I will start using DiBendetto know that he is starting to run in the top 20.