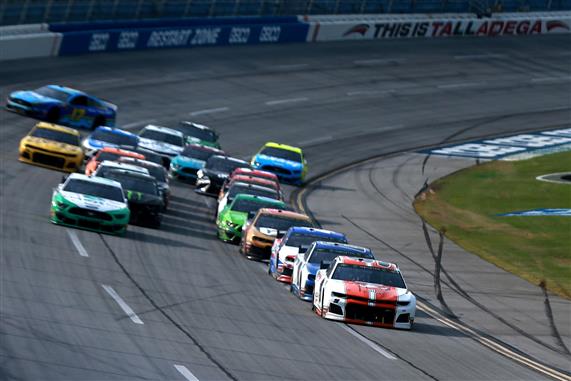 The MENCS returns to the Talladega for the second race in the Round of 12 of the playoffs. The drivers are all scared of this track because they know they have little control over their fate at Talladega. Some drivers are better than others at avoiding the wrecks but even the best drivers have a 50/50 chance of getting caught up in the “Big One” this week. That means we will need a lot of luck with our Fantasy NASCAR lineups as well. It should be exciting. The 1000Bulbs.com 500 can be seen Sunday at 2 p.m. ET on NBC.

* I will not be posting Garage Talk Notes this week since practice is almost meaningless at Talladega. Even the less funded cars can run up front at this track. Most teams do not talk about their downforce on the radio so little information is released.

The cars will have the 550 HP engines with the 2” splitter, 8” spoiler and aero ducts this week. It is the same package used earlier this season at Talladega and both races at Daytona. The cars were slower but the racing was about the same as what we have seen in the past at the track.

My early week pick for the pole is Austin Dillon. Teams can almost choose their starting position at Talladega. Teams can take out downforce from their car to add speed and start up front or keep the downforce in the car and allow it to move easily around the track once the green flag is waived. Richard Childress Racing has given up drivability this season so they can start up front. I expect that trend to continue this week.

Here are the early week driver rankings for Talladega…