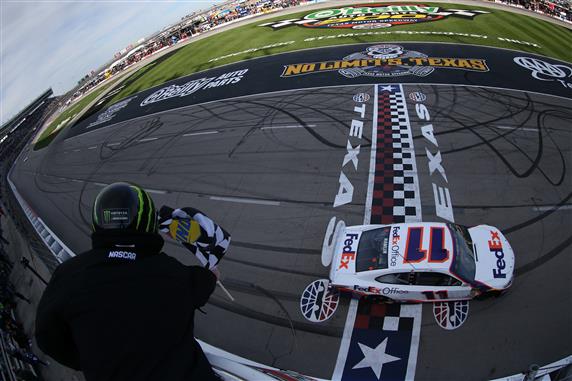 The MENCS will travel back to Texas Motor Speedway this week. The series has not competed at the track since March but we did have to races in the playoffs on the 1.5-mile tracks. The drivers who ran well at Las Vegas and Kansas should be fast this week. It will be fun to see the eight playoff drivers battle it out for a spot in the championship race at Homestead. The AAA Texas 500 can be seen Sunday at 3 p.m. ET on NBC Sports Network.

NASCAR will be back to a normal schedule this week. There will be two practices Friday. The first practice is at 3 p.m. (NBCSN) and final practice will be at 5 p.m. (No TV. Taped delayed will show Saturday at 7 p.m. on CNBC… That is just STUPID!) Qualifying will be Saturday at 7 p.m. ET (NBCSN).

The cars will be inspected Saturday before qualifying so we do not have to worry about any cars failing inspection and starting from the back this week.

The cars will have the 550 HP engines with the 2” splitter, 8” spoiler and aero ducts this week. It is the same package they used in all of the 1.5-mile track races this season (except Atlanta). I would focus on the results from the intermediate tracks this season and not what happened at Texas in previous seasons.

My early week pick for the pole is Ryan Blaney. Qualifying has been a complete mess on the 1.5-mile tracks because teams need to decide if they want to trim out their cars to start up front or put more downforce into the car so it drives well in the race. Blaney chose to trim out the No. 12 car at Kansas and almost won the pole. I expect the team will do the same Saturday.

Each week I use different stats in my model to create the best rankings possible to give you an edge on the completion. This week I used Driver Ratings at the 1.5-mile tracks, Average Running Position at 1.5-mile tracks, Driver Rating at the playoff races at Las Vegas and Kansas, Average Running Position at playoff races at Las Vegas and Kansas, Green Flag Passes in last 4 1.5-mile track race and momentum from the last 4 non-Superspedway oval track races.

Here are the early week driver rankings for Texas…

* I will post my final driver rankings Sunday Morning.