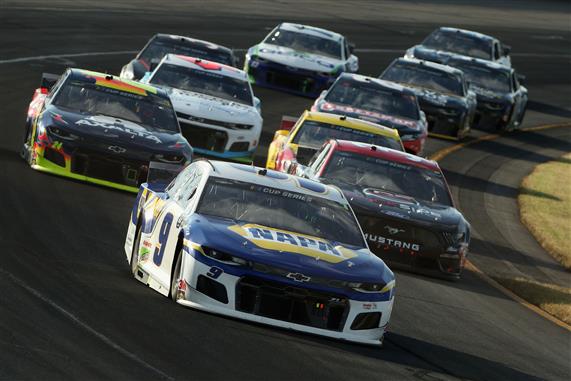 The Cup Series will compete at Kentucky Speedway this week. This race has a low accident right since the track has been pretty easy to navigate since it was repaved before the 2017 season. There are still some bumps, but nothing the best drivers in the world can’t handle. I expect more winning lineups this week. The Quaker State 400 can be seen Sunday at 2:30 p.m. ET on Fox Sorts 1.

We do not need to focus as much on dominators on FanDuel as we do on DraftKings because FD does not award fastest lap points. The main dominator will likely score 6-8 bonus points. My strategy this week will be to select as many drivers as possible with a good chance to finish in the top 12 and score some place differential points. If we “run into” some dominator points on the way… that is even better for us.

FanDuel Points Prediction Based on Stats 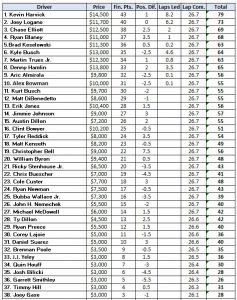 Kevin Harvick ($14,500): It is hard to fade the No. 4 car right now because Kevin Harvick has been on fire. He only has one win on the 1.5-mile tracks this season (Atlanta), but the No. 4 car has consistently been fast. Harvick led the most laps (92 laps) at Las Vegas (most similar track to Kentucky), at Charlotte (62 laps) and at Atlanta (151 laps). Harvick is the safest pick to dominate the race Sunday.

Denny Hamlin ($13,800): Denny Hamlin has been the class of the field, along with Kevin Harvick this year. Both drivers have four trips to Victory Lane and both have been good at leading laps. Hamlin led 137 laps in the last race on a 1.5-mile track (Homestead). He usually runs in the top five at Kentucky but he has only led five laps in his last five races at the track. The No. 11 car has never been this fast though. Hamlin will have a good chance to score place differential and dominator points Sunday.

Chase Elliott ($12,500): Chase Elliott could easily be the top dominator Sunday. He did not look that great at Pocono or Indianapolis but those tracks have nothing to do with Kentucky. Elliott has an 8th place average finishing position on the 1.5-mile tracks this season. He also led 87 laps at Charlotte and 65 laps at Atlanta. His stats at Kentucky are not great but he did finish 3rd at this track in 2017. The No. 9 car is simply running too well this season to fade.

Kyle Busch ($13,000): The stats for Kentucky scream…PLAY KYLE BUSCH. But when you look at his stats in 2020, they scream… FADE KYLE BUSCH. So what do we do? Busch has a 4th place average finishing position in his nine races at Kentucky and he has led over 70 laps in five of the races at the track. Busch has only led 9 laps in the five races on the 1.5-mile tracks this season. He starts on the pole so that is a plus. Busch also started on the pole at Las Vegas and he did not lead any laps and finished 15th.

Martin Truex Jr. ($12,300): Martin Truex Jr. won the races at Kentucky in 2017 and 2018. He also average 163 laps led in those races. NASCAR switched to the 550 HP aero package last year and the No. 19 car was completely lost. Truex had a 14.2 average running position and finished 19th. The good news is… Truex led 87 laps at Charlotte and 65 laps at Atlanta this year so there is a chance the No. 19 team figures out the setup for the race. I will have some shares of Truex because he is a tough driver to bet against.

Joey Logano ($11,700): There is a lot to like about Joey Logano this week. He won at Las Vegas earlier this season and that track is the most similar in shape and banking as Kentucky. He also was leading this race by 4 seconds last year with 8 laps to go when a caution brought the field back together. Logano should have easily gone to Victory Lane. His crew chief (Paul Wolfe) has the most wins at Kentucky and he should have the best setup for the car without practice. Logano has been struggling lately and trip back to a tri-oval 1.5-mile track should be just what he needs to get back on track Sunday.

Brad Keselowski ($11,300): Brad Keselowski has a series-high three trips to Victory Lane at Kentucky. Keselowski’s 524 laps led at Kentucky are second-most to Kyle Busch’s 621 laps led. The only race on a 1.5-mile track that Keselowski was able to score dominator points on this year was at Charlotte. I like Keselowski more as a top-five driver then a dominator, but I will roster the No. 2 car and hope the team uses strategy to steal some track position Sunday.

Ryan Blaney ($11,000): Selecting as many Team Penske drivers as possible may be a good strategy this week. Ryan Blaney has a series-best 4.8 average finishing position on the 1.5-mile tracks this season. The No. 12 car has finished 3rd, 4th, 3rd and 3rd in his last four races at the 1.5-mile tracks. Blaney has also led laps in four of the five races. Blaney finished second at Kentucky in 2018. He will have a good chance to score place differential and dominator points Sunday.

Erik Jones ($10,400): Erik Jones is a good play from the 16th starting position. He does tend to be a boom or bust driver, but Kentucky has been a reliable track for him. Jones finished 3rd, 6th and 7th in his three races at the track. That ranks 2nd best in the field. I will have a lot of shares of Jones Sunday.

Matt Kenseth ($8,200): I prefer Tyler Reddick in Cash and Single-Entry Tournament Contests and pivoting to Matt Kenseth in Multi-Entry Tournament Contests. Kenseth said that he finally had time to talk to his crew chief and work on a setup for his car. The result was a 2nd place finish at Indianapolis. The team will once again have Kenseth’s setup in his car (and not Kyle Larson’s). The former Kentucky race winner could move to the front Sunday.

Tyler Reddick ($8,000): How happy must Tyler Reddick be to get out of Pocono and Indianapolis? He was terrible at the large, flat tracks, but he should get back to his early season form this week. Reddick was pretty good at Kentucky in the Xfinity Series. He finished 3rd, 6th and 1st in his last three races at the track. Reddick starts 24th and his average finishing position on the 1.5-mile tracks this season is 12th. Reddick should move up 10-12 spots Sunday.

Cole Custer ($7,700): I really like Cole Custer as a pivot from Christopher Bell on DraftKings. Custer starts 29th and he has an 18th place average finishing position on the 1.5-mile tracks this season. Daniel Suarez finished 8th at Kentucky in the No. 41 car. I would not be surprised if Custer had similar results.

Ryan Newman ($7,500): Ryan Newman has not been great this season, but he is worth a spot in a few Multi-Entry Tournament Contests this week. He starts 23rd and his average finishing position on the 1.5-mile tracks is 21st. There is always a chance Newman could finish inside the top 15. His price is too cheap this week. 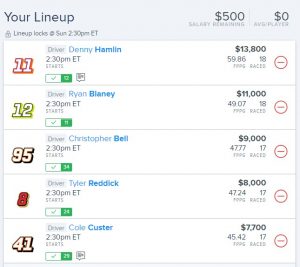 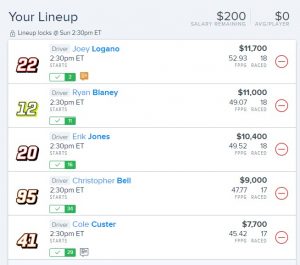 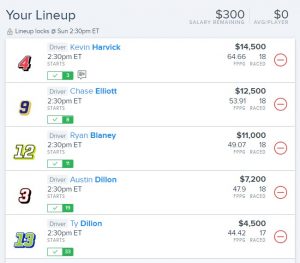