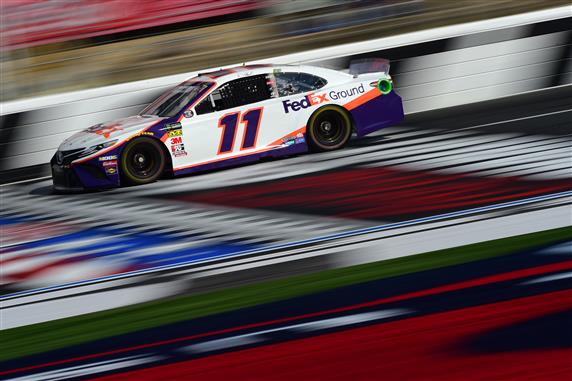 The Monster Energy NASCAR Cup Series will compete in the longest race in motorsports. The Coca-Cola 600 is a marathon and a lot can happen over the final 200 miles. The cars will once again be using the 550 HP engines with the 2” splitter and 8” spoiler. It is the same aero package which produced some of the best racing in a long time. Now we get 5 hours of close racing this week. The Coca-Cola 600 can be seen Sunday at 6 p.m. ET on Fox.

* Important Fantasy Live News: The Coca-Cola 600 will have 4 Stages. Stage 1 and Stage 2 will be the only Stages where drivers will earn bonus points for finishing in the top 10. Stage 3 will not be scored. Lineups do not lock until THE END of Stage 3 so we get to see 75% of the race before you must make a decision on your Garage Driver.

Kyle Busch (5): The No. 18 team is not winning races like they were earlier in the season but it is hard to ignore Busch’s statistics at Charlotte. He has finished 1st or 2nd in the last 2 Coca-Cola 600s and last year he won both Stages and led 377/400 laps. Those are numbers I cannot fade Sunday. I expect Busch to challenge Harvick for the Stage wins and for a trip to Victory Lane Sunday.

Kevin Harvick(4): Harvick did not perform well in practice. He posted the 17th fastest speed in final practice and he was only 13th fastest on the 10-lap average speed chart. I am not worried about the No. 4 team. They have a history of performing poorly in practice and running well in the race. Harvick starts 5th so he should run up front and score some Stage points Sunday. We have the Garage Driver to replace Harvick in case his car does not have the speed that I expect.

Martin Truex Jr. (7): Truex absolutely dominated this race in 2016. He led 392 of the 400 laps. I doubt he will do that again, but he should led some laps, score some Stage points and finish in the top 5. Truex starts the race in the 14th spot and the Stages are long in the Coca-Cola 600. He will have plenty of time to make his way through the field. I have a lot of allocations left with Truex so I need to start using them.

Chase Elliott (7): Elliott has been on a hot streak over the last month. He won at Talladega, finished 5th at Dover and 4th at Kansas. He has also led at least 35 laps in 7 of the last 8 races. Elliott is a smooth and steady driver and that is what it takes to win a marathon race. Elliott did not look fast on the speed chart in final practice but he said on the radio that he is really happy with the drivability of his car. Elliott should run inside the top 10, score a lot of Stage points and be a threat to win Sunday night.

My Garage Driver this week will be Denny Hamlin (8). Charlotte ranks as the best track for Hamlin. He has finished 3rd, 5th and 4th in his last 3 Coca-Cola 600s. Hamlin had a fast car in final practice. He posted the 2nd fastest speed with the 4th fastest 10-lap average speed, 2nd fastest 15-lap speed and the 3rd fastest 20-lap average speed. Hamlin should quickly make his way through the field from the 20th starting position.