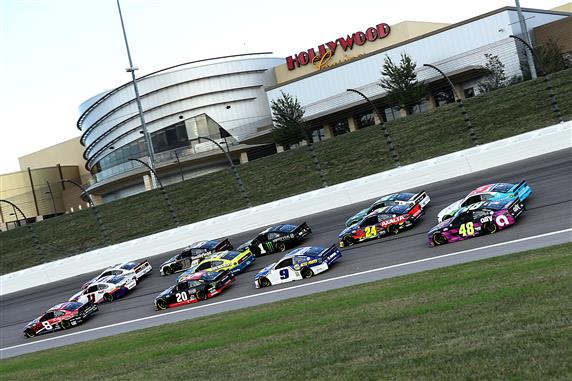 The Round of 12 is complete and now there are only eight drivers left with a chance to win the Cup Series championship. The cream usually rises to the top in the Round of Eight because the eliminated drivers do not want to ruin a drivers’ chances of advancing to Phoenix. The eight drivers competing for the championship include Kevin Harvick, Denny Hamlin, Brad Keselowski, Martin Truex Jr., Chase Elliott, Alex Bowman, Kurt Busch and Joey Logano. It would be a good idea to get as many of these drivers as possible into our lineups Sunday.

The picks started off on fire at the Charlotte Roval. All of the drivers where running in the top 10 when the track was wet. When the track dried out, it completely shuffled the running order. Some drivers were using rain tires and lost a lot of speed. Others had slick tires and quickly made their way to the front. The lineup lost a lot of Stage points because many of the drivers had to come to the pits for slick tires. The team still scored 200 points. That is not too bad at the Charlotte Roval.

Martin Truex Jr. has been good on the 1.5-mile tracks this season. His 108.4 Driver Rating is a series-best. Truex also has a 5th-place average finishing position at Kansas in his last 8 races at the track (including two wins). He had another good race at the track in July. Truex led 44 laps, scored 11 Stage points and finished 3rd. He should have a similar race Sunday.

Kevin Harvick has been the most dominant driver in 2020 but he only has one win on a 1.5-mile track (Atlanta). His 106.4 driver rating is third-best though (behind Martin Truex Jr. and Ryan Blaney). Harvick had a good but not great race at Kansas in July. He started on the pole, led 9 laps, scored 9 Stage points and finished 4th His average finishing position at Kansas since the Cup Series went to the 550 HP aero package is 8th. I have a feeling the No. 4 team will bring a better car to the track then what they had in July.

Brad Keselowski won the spring race at Kansas last year. It was his 2nd win at the track. The No. 2 team had another good race at Kansas in July. They took 2 tires to gain track position after a caution in Stage 2. Keselowski ended up winning the Stage and led 30 laps. His 4.2 average running position in the race was third-best (behind Denny Hamlin 3.1 and Martin Truex Jr. 3.7). Keselowski finished 2nd in the July race at Kansas. He should be a good pick again Sunday and he may win if this race comes down to pit strategy.

Chase Elliott entered the July race at Kansas as one of the favorites because of his strong track history. Elliott finished 1st, 4th and 2nd in the 3 prior races at Kansas. The No. 9 car did not have the same speed in July. Elliott started 12th; only score one Stage point and finished 12th. There is a strong possibility that the teams who were locked into the playoffs were testing in the last race at Kansas. The No. 9 has a history of running well at this track so I expect Elliott to be much better Sunday.

Garage Driver: Ryan Blaney is the only non-playoff driver that I trust Sunday. His 107.2 Driver Rating on the 1.5-mile tracks is second to Martin Truex Jr. Blaney had a fast car but bad luck at Kansas in July. He started 4th and spent most of the race running in the top 5. Blaney led 15 laps, scored 16 Stage points but he got into the wall while trying to race Brad Keselowski for the lead. His car was one of the fastest. He just needs better luck. Blaney will be a good insurance policy to have in the Garage Sunday.