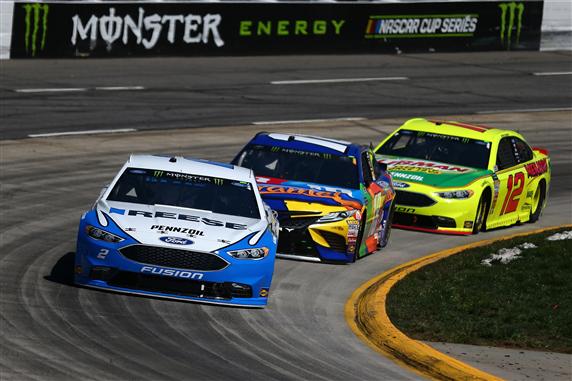 We finally won the bonus points for selecting the pole winner. Hopefully we can keep our good luck going in the First Data 500 Sunday.

My two Playoff Drivers will be Kyle Busch and Clint Bowyer. Track position is very important at this track and they qualified #1 and #2. Both drivers are very good at Martinsville. Busch had the fastest car on the 10-lap average speed chart and Bowyer was 3rd. I expect these two drivers to dominate the race Sunday.

My two Non-Playoff Drivers are likely to be Brad Keselowski and Denny Hamlin. Keselowski has been the 2nd-best driver at Martinsville (behind Kyle Busch) since 2015. Keselowski has finished 10th, 4th, 1st, 2nd and 5th in his last 5 races at Martinsville. Keselowski had the 2nd fastest car on the 10-lap average speed chart. Keselowski is the type of driver who would love to steal the spotlight and win the race Sunday. I think he could do it.

Denny Hamlin has been very good in the October races at Martinsville. There is no doubt that Hamlin knows how to turn fast laps at his home track. The problem is that he usually makes mistakes in the pits. Hamlin is usually eliminated from the playoffs by the time the series competes at Martinsville in October and Hamlin runs a lot better when there is not pressure. He has finished 7th, 3rd, 3rd, 8th and 6th in his last 5 October races at the track. I expect Hamlin to run well Sunday.

My Garage Driver will be Ryan Blaney. I selected a Non-Playoff Driver for the Garage because I trust Kyle Busch and Clint Bowyer more than I trust Brad Keselowski and Denny Hamlin. Can Hamlin go 500 laps without a pit road penalty? I am not sure. Blaney should be a good insurance policy. He led the second-most laps at Martinsville in March. His car looked just as fast in practice this weekend.