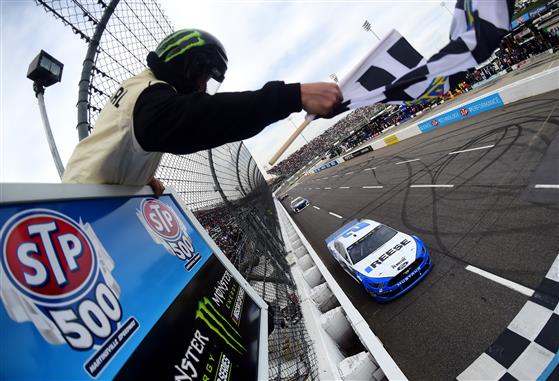 There are two races left in the Fantasy Live season and once again it has been a good year for the picks in this game. The picks outscored 99.6% of the entries in the regular season. We have some work to do in these final two races to crack the top 99% in the playoff portion of the game. The Xfinity 500 can be seen Sunday at 2 p.m. ET on NBC.

I went all in with Kevin Harvick at Texas and it burned me. I thought the No. 4 team would get the car fixed up and make a run to the top five in the final Stage since the stage was 124 laps long. He needed a caution and did not get it. The picks fell from beating 98.6% of the competition to beating 97.8% of the competition. That is still not too bad.

Martin Truex Jr. has dominated the last two races at Martinsville. He started 3rd, won both Stages, led 464 of the 500 laps and went to Victory Lane in the October race last year. He started 5th but it took him half of the race to get his car right in June. Truex took the lead from Brad Keselowski on lap 370 and it was all over after that. Truex led 132 laps and went to Victory Lane for the second consecutive time at Martinsville.

Brad Keselowski is the most consistent driver at Martinsville. He is almost a lock for a top-5 finish Sunday. Keselowski hs finished 3rd,3rd, 1st, 5th, 10th, 4th, 2nd, 1st, 2nd and 5th at Martinsville since 2015. He had a good race at the track in June. Keselowski started 6th, only led 5 laps, but he finished 3rd. The No. 2 car is going to be tough to beat Sunday.

Joey Logano has one win at Martinsville but he would have two if Matt Kenseth did not seek revenge on the No. 22 car in 2017. Logano had another great race at Martinsville in June. He started 3rd, won Stage 1, finished 3rd in Stage 2, led a race-high 234 laps and finished 3rd. Logano is already locked into the championship race at Phoenix so he will not be concerned with Stage points Sunday but he is too good to pass up this week.

Ryan Blaney has been one of the best drivers at Martinsville of the last two seasons. That should not surprise anyone because Team Penske Racing has dominated the recent races at this track. Blaney finished 2nd, 4th and 5th in his last 3 races at Martinsville. Blaney started on the pole, led 34 laps, scored 9 Stage points and finished 2nd in the June race. He should be the best non-playoff driver in the race Sunday.

Kyle Busch finally made it back to Victory Lane. So will his win at Texas give him the confidence to dominate the race at Martinsville, like he has so many times in the past? Busch did not have a good race at Martinsville in June. He started 7th and finished 19th. Rowdy is coming off a 5th place finish at Kansas and a win at Texas. It looks like the No. 18 team may have figured something out so I will roll the dice with the driver with the best average finishing position at Martinsville.

Garage Driver: Denny Hamlin has 5 trips to Victory Lane at Martinsville (second-most in the Cup Series). He entered the race in June as one of the favorites because of how well he was running in the 2020 season and his past performance at this track. Hamlin finished 2nd, 5th and 4th in the last two years at Martinsville. The No. 11 car really struggled in June. He started 12th, did not score any Stage points, went a lap down after 100 laps and finished 24th. Hamlin has been too good to fade Sunday so I will start him in the Garage. Hopefully Joe Gibbs Racing learned something this summer that will make their cars faster Sunday.