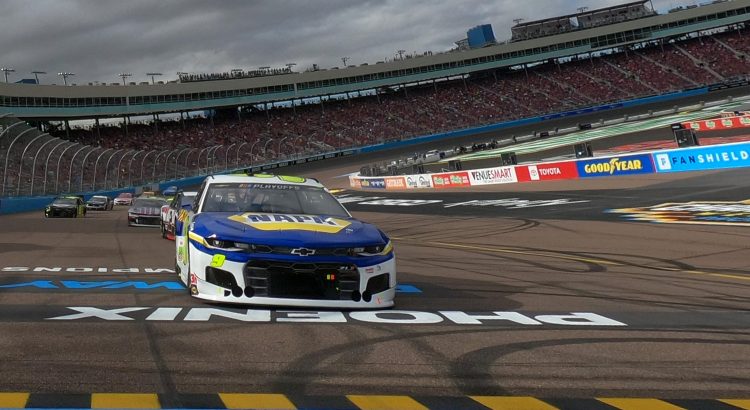 The NASCAR Cup Series will compete one more time out west before the return to the east coast. This week the race will be at Phoenix Raceway. This is also the home of the championship race in November, so there will be no sandbagging by the teams this week. They want to see what they have for the 750 HP aero package so they will not what to improve upon when the championship trophy is on the line. This is always a fun race to watch because the drivers take a “short-cut” across the front-stretch. The Instacart 500 can be seen Sunday at 3:30 p.m. ET on Fox.

There were only four races on the short, flat tracks last year. They included the two races at Phoenix and the races at Loudon and Richmond. Martinville is also a short, flat track but the setup is completely different for the paper-clip shaped track. We can learn a lot by looking at which drivers ran well in the races at Phoenix, Loudon and Richmond. Here is a breakdown of how each driver finished each race, their total Stage points and their total laps led…. 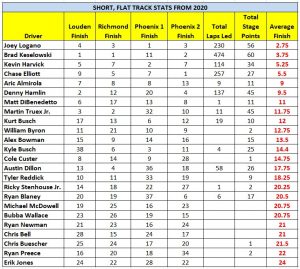 Here are my picks for the Instacart 500…

* I am hedging my bets and picking Chase Elliott to win the race, Chevy as my winning manufacturer and Team Penske as my winning team. This will give me bonus points if Brad Keselowski, Joey Logano, Ryan Blaney, Chase Elliott, Kyle Larson or any of the other Chevy’s wins the race. That gives me a lot of chances to score some extra points, instead of having all of my eggs in one basket.

Brad Keselowski (9): Brad Keselowski was the King of the Short, Flat Tracks last year. He finished second, first, first and 11th in the four races. He also averaged 118.5 laps led and averaged 9.8 Stage points per race. Keselowski will have a great chance to score a lot of stage points, lead a lot of laps and finish up front from the pole position Sunday.

Joey Logano (7): Joey Logano did not look great in his last two races but that was in the 550 HP aero package. This will be a completely different race at Phoenix in the 750 HP aero package. Logano was one of the best drivers using this package last year. He won this race at Phoenix and came back in November and finished third. He also finished third at Richmond and fourth at New Hampshire. Logano averaged 46 laps led in these race and 14 Stage points per race. He should lead some laps, score a lot of Stage points and have a good chance to win Sunday.

Kyle Busch (10): Kyle Busch sure hates his cars this year but he still finished the last two races in the top 10. Now Busch gets to compete at one of his best tracks. Busch has been money at Phoenix. The No. 18 car has a 3.6 average finishing position in his last 11 races at Phoenix. That is a large sample size with a lot of success. Busch has also scored Stage points in every Stage ever run at Phoenix. That includes four Stage wins and an average of 83 laps led per race. This is the week to use an allocation with Busch.

Kyle Larson (8): People wondered how good Kyle Larson could be in good equipment. So far he is awesome. He won the race last week and finished fourth at Homestead. Now Larson gets to compete at another one of his best tracks. Larson has finished fourth, fourth, sixth and third in the current aero package at Phoenix. The No. 5 car starts on the front row and should lead some laps, score a lot of Stage points and have a good chance to make it back-to-back trips to Victory Lane.

William Byron (10): William Byron has been on fire the last two weeks and he should not slow down in Phoenix. Byron finished both races at Phoenix in the top-10 last year. The No. 24 car is running a lot better this year than they were in 2020. Rudy Fugle will likely gamble since the team is locked into the playoffs. I will use Byron so I can save an allocation with one of my top drivers.

Garage Driver Denny Hamlin (9): Denny Hamlin will be in my Garage Sunday. Hamlin won the race at Phoenix in November of 2019. He came back and finished fourth last November. He also finished second at New Hampshire last week. The No. 11 car has looked really fast this year and I see no reason why he may slow down this week.