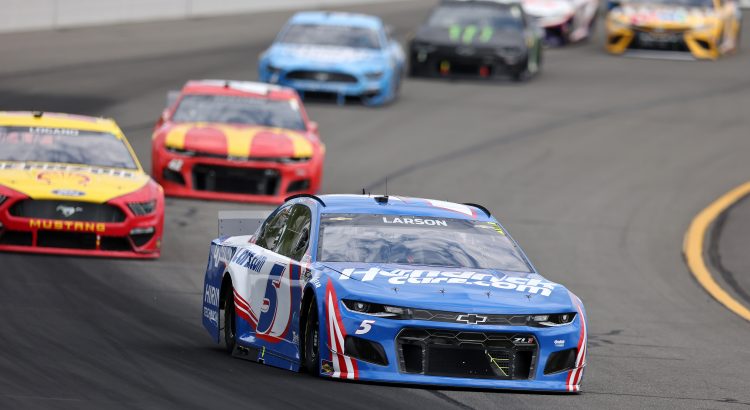 The rules are a bit different for today’s race. The teams are required to use the same car they used in Saturday’s race. They are only allowed to make minor adjustments. The changes allowed are the same adjustments the teams can make during a normal pit stop.

My strategy will be to select the drivers who ran well yesterday. I tried to save allocations yesterday with my top drivers and that did not work out well. I will not make that mistake today.

Here are my picks for Explore the Pocono Mountains 350…

Kyle Busch (3): Kyle Busch had one of the fastest cars yesterday and they should be able to make it a bit faster today. Busch started 5th and finished 2nd. He also 6th best Driver Rating and the 2nd Fastest Green Flag Speed. I only have three allocations left with Busch, but I am using one today.

William Byron (4): William Byron had a fast car once again. He has finished every race on an oval or triangle in the top-10 (Not including the Superspeedways). He is by far the most consistent driver in the Cup Series. Bell started 2nd and finished 3rd yesterday. He also posted the 4th best Driver Rating (100.7), the 4th Fastest Green Flag Speed (167.369) and had the 6th most Quality Passes (34) in the race. He should have no problem getting to the front from the 18th starting position.

Alex Bowman (5): I should have used Alex Bowman Saturday but hindsight is 20/20. Bowman won the 1st race at Pocono and now he will start 20th Sunday. I am not worried about his starting position. Bowman led the Cup Series with 57 quality passes in the race yesterday. No driver in the field was as good as Bowman at passing cars. He also had the 6th best Driver Rating (110.9) and the 8th Fastest Green Flag Speed (166.733). I will use an allocation with Bowman Sunday.

Ryan Blaney (6): It seems like Ryan Blaney gets upset while racing with other drivers a lot at Pocono. Blaney fought with Kyle Busch on the track last year before Blaney put Rowdy into the wall. Yesterday it was William Byron who he had a problem with. The reason why Blaney is always so heated under the helmet is because he is running up front and competing for the win. I expect that to be the case again today.

Brad Keselowski (3): Brad Keselowski was moving to the front like he was shot out of a cannon at the beginning of the race but then he got into Cole Custer. The damage on his car slowed down the No. 2 car, but he was still able to post the 10th fastest average speed and finished 10th in the race. Keselowski has now finished 11 of the last 12 races at Pocono in the top-11. He should finish in the top-10 Sunday.

Garage Driver: Kevin Harvick (4): Kevin Harvick did not have a great race yesterday but he was still able to finish 8th. Now crew chief Rodney Childers has 8 hours to work on the car. I am sure they will find a bit more speed. I will have Harvick in the Garage as an insurance policy just in case the No. 4 car is fast today.

* If you need other options for your lineup or want to know what drivers I like the best for today’s race, check out the Driver Rankings for Pocono