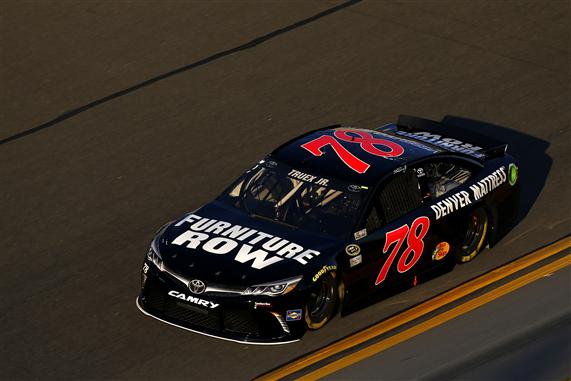 The MENCS competes at Richmond Raceway this week. Allocations are important in this game but if you plan out which tracks are best for each driver, you can still build a great lineup and have enough allocations for the rest of the season. NASCAR is a momentum sport. My strategy will be to continue to use the drivers who are running very well right now because there is no guarantee they will be this good later in the season.

Martin Truex Jr. (8). Truex has led at least 190 laps in the last 2 night races at Richmond. Cole Pearn knows how to set up a car under the lights at this track. Truex had the 3rd-best 10-lap average speed in final practice. I expect the No. 78 to run well this week.

Kevin Harvick (5): Harvick said something on TV in final practice that should scare the field. He said, “This is the best car I have ever had at Richmond and the best I have had this season.” This is the same car Harvick won at Phoenix earlier this season. Harvick had the fastest car on the 20-lap runs. He should be a threat to win his 4th race of the season Saturday night.

Kyle Larson (6): Larson is running really well right now. He dominated the race at Bristol and he had the fastest car in practice Friday. Larson won the last race at Richmond and he should be a serious threat to win again Saturday night. He has been the most dominant driver in the last two races at Richmond under the lights.

Joey Logano (5): Richmond is the best track for Logano. He finished 1st and 2nd in the two races last year. The No. 22 team spent a lot of time working on their long run speed. They had their early speed dialed in. Logano was one of the fastest in the first 10 laps of a run in practice. If they figure out the long run speed he could be in Victory Lane this week.

Kurt Busch (6): Richmond ranks as the 2nd best track for Busch behind Atlanta. He is very good at moving around the worn out track to find speed for his car. Busch was 2nd-fastest on the 20-lap speed chart in final practice. He finished in the top 10 at Phoenix and I think he will run well Saturday night.

Garage Driver: My Garage Driver this week will Chase Elliott (8): He was very fast in practice and his car has very good long run speed. His history at the track is not very good so I will start him in the garage. Elliott is a quick learner, so I expect him to keep the No. 9 car upfront Saturday night.

* I wanted to use Kyle Busch in this race but he qualified 32nd. I only have 5 allocations with Busch so I will save him for a race where he starts up front.

Here are my picks for the Richmond…