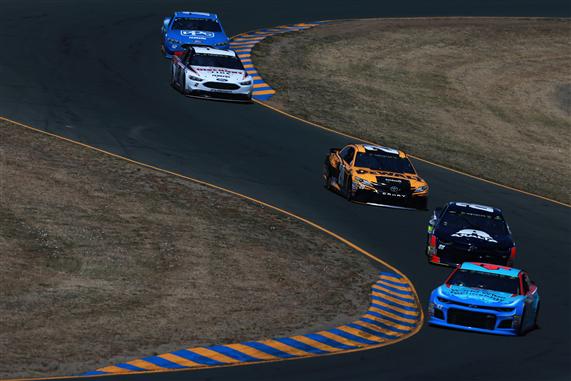 The MENCS competes at Sonoma Raceway this week. There are 11 races left in the regular season to get to the top of the overall standings. My picks are ranked 72nd overall so there is still time to get to the No. 1 spot and win the $10,000 prize.

* Garage Driver: Fantasy players can put a driver (Garage Driver) into their lineup at any time before the end of Stage 2. You will lose the Stage points from the driver you take out of your lineup though. I only plan to make a change if one of my driver crashes and that is likely to happen this week. If I make a change I will post a message on my Twitter account: @MrFantasyNASCAR

Here are my picks for the Sonoma…

I am down to three allocations left with Kevin Harvick, Kyle Busch and Martin Truex Jr. so I am going to try and make it through this race without them. I want to save these three drivers for the 1.5-mile tracks. If I had 4 or more allocations with either of these drivers I would use them over AJ Allmendinger or Jamie McMurray (in that order).

Clint Bowyer was my pick to win this race before the season started and I am not changing now. Stewart-Haas Racing has won the last two races at Sonoma and their cars were the fastest in the two practices Friday. Bowyer has the best average finishing position at Sonoma in the last four races at the track so his floor is high. I am not too worried about Bowyer starting 19th. He will make quickly make his way to the top 10 Sunday.

Denny Hamlin has been one of the best drivers at Sonoma in the last two races at the track. He led the most laps and finished 2nd in 2016 and led the 3rd-most laps and finished 4th last year. Hamlin has a fast car again this week. He was 2nd-fastest in final practice and the team liked their long-run speed. Hamlin said he missed a shift in turn four in qualifying. As a result he will start 21st. Hamlin is a lot faster than the competition starting around him. I expect him to be inside the top 10 before the end of Stage 1.

Jimmie Johnson has not had a lot of value this season but that should change Sunday. He has been very good at Sonoma in his career. Johnson was pretty consistent in practice. Then spent both practices in race trim and Johnson had top 10 speed. Chevy took 5 of the top 7 spots in qualifying so the new Camaro ZL1 car must race well at this track. I will take my chances with Johnson this week.

Jamie McMurray should be a good pick this week and allow you to save an allocation with your top drivers. McMurray has a 10th-place average finishing position in the last four races at Sonoma. He was 4th-fastest in final practice with the 5th-best long run speed. I expect McMurray to finish in the top 10 Sunday and score some Stage points.

AJ Allmendinger will be a better pick in Fantasy Live than he will be in the other Fantasy NASCAR games. Allmendinger always runs well at Sonoma and leads laps, but he often over drives the car and has problems at the end of the race. The Garage Driver allows us to take a risk with Allmendinger and replace him if he has problems. I am hoping he puts it all together this week and allows me to use an allocation with him.

Garage Driver: I was planning on using Kurt Busch in my starting lineup and then he went out and qualified 23rd. I am not sure what happened to the no. 41 car Saturday but I am not too worried about it. I will have Busch in the Garage and if he quickly makes his way to the front I will put him into the race.