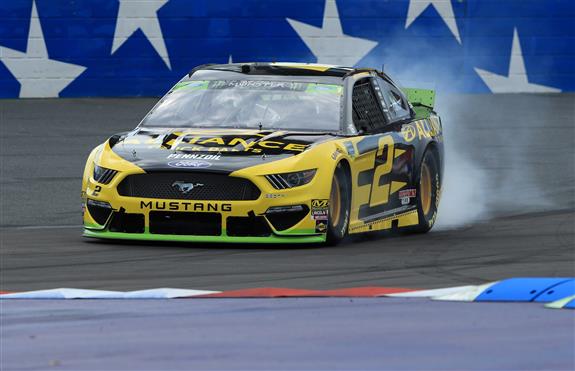 The last chance for the 16 playoffs drivers to secure their spot in the Round of 12 is already here. Wow, that went by quickly. The “Roval” course at Charlotte Motor Speedway is a wild card race. Teams have a lot more information to go off of then they did coming into this race last year, but most teams are still trying to figure out the half-road course / half-oval track. This should be one of the more wild races of the season. The Bank of America Roval 400 can be seen Sunday at 2 p.m. ET on NBC.

Here are my picks for the race in Charlotte Roval….

* I am fading Martin Truex Jr. in my lineups but picking him to win the race. He crashed his car in final practice so the No. 19 car will start from the back. Truex said he does not need any Stage points so they plan to give up the Stage points so he can get the track position to win Sunday. I need drivers who will score Stage points so I will pick two other drivers.

Ryan Blaney: Blaney has been good on the road courses this year. He finished 3rd at Sonoma and 5th at Watkins Glen. That gives Blaney a 3rd-place average finishing position in the last three road course races. The No. 12 team brought another fast car to the track this week. Blaney posted the 6th fastest lap in final practice and he qualified 9th. Blaney should score a lot of Stage points and finish upfront Sunday.

Jimmie Johnson: Johnson finished 8th in the Charlotte Roval race last year. He was running down Martin Truex Jr. on the last lap and decided to race him aggressively for the win, instead of taking the points to advance to round 2. Both cars spun out and Johnson finished outside the top 5. It looks like he brought the same speed to the track this week. Johnson posted the fastest lap in the first practice and he had a fast car in final practice. He did spin out and hit the wall but the team said they could fix the car.

Chris Buescher: It is tough to find two good Non-Playoff Drivers. I will take a chance with Buescher. He has been a good road course driver over the last two seasons. Buescher qualified 12th, posted the 9th fastest long-run speed in final practice. I would not be surprised if Buescher finished in the top 10 Sunday.

Chase Elliott: Elliott will have a good chance to win the race Sunday.  He won 2 of the last 4 road course races and would have 4 straight top five finishes on the road courses if he did not have engine problems at Sonoma. Elliott posted the fastest speed in final practice with the fastest long run speed. I am not worried about his starting position. He will make his way through the field.