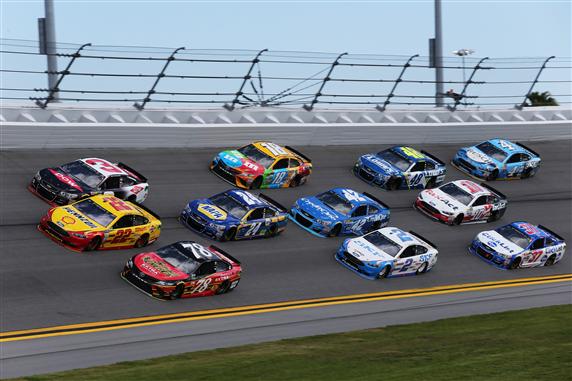 The Monster Energy NASCAR Cup Series travels to Daytona, Florida this week for the Coke Zero 400. The race can be seen Saturday night at 7:30 p.m. ET on NBC. Be sure to test your knowledge of NASCAR by competing in the Fantasy Live game on nascar.com.

This will be the second race at Daytona for the Monster Energy NASCAR Cup Series. Although the races are on the same track, they could not be more different. The Daytona 500 had two qualifying races which allowed some very good drivers to qualify in the back of the field and score a lot of position differential points. The race this week has single car qualifying so the best cars should all start up front. The track will be hotter and slicker so handling will be very important this week.

The strategy for Fantasy Live is not difficult at Daytona. Do not select any drivers who start inside the top 20. There is no need to chase laps led, fastest laps or Stage points this week. Drivers who start 30th or worse can make it inside the top 10 in one lap. Also do not worry about leaving some salary on the table. It is not about which teams spend the most money this week, it comes down to who scores the most points. You must have the drivers in the back to post a high score Saturday night.

My list of drivers really does not matter for the Coke Zero 400. Any driver who starts the race will have a good chance to finish up front. I will list my favorites and my value picks. If any of these drivers start outside the top 20, they should be in your lineup at Daytona.

Kyle Larson ($27.75) is not the first name that comes to mind when it comes to restrictor-plate racing but he should not be overlooked this week. Larson has been the best driver in the Cup Series this season and he will not slow down at Daytona. Larson had a series-best 8.1 average running position and the third-best driver rating in the Daytona 500. Larson led 16 laps and almost made it to Victory Lane. The California kid will be a good pick for your team Saturday night.

Kevin Harvick ($27.50) is often referred to as “The Closer” at Daytona because he likes to ride in the back of the pack before making his way to the front in the final laps of the race. Harvick had the sixth-best average running position in the Daytona 500 and he led 50 of the 200 laps. Harvick will have momentum after winning his trip to Victory Lane last week at Sonoma. Harvick has two restrictor-plate wins on his resume and it would not surprise me if he added another Saturday night.

Brad Keselowski ($27.00) is one of the best restrictor-plate drivers in the sport. He has five wins on these tracks but four of them came at Talladega. Keselowski did win the summer race at Daytona last year, so he is still a good choice at this track. Keselowski has led the second-most laps (118) behind Dale Earnhardt Jr. in the last five races at Daytona. The Fords have had the most horsepower this season so I expect Keselowski to be up front Saturday night.

Denny Hamlin ($26.75) has become one of the best restrictor-plate races in the sport. He won the Daytona 500 last year and he has finished five of the last seven races at the track in the top six. Hamlin needs a win to secure his spot in the playoffs. After a slow start to the season, Hamlin has been on a hot streak. He followed up his fourth-place finish at Michigan with a fourth-place finish at Sonoma. Hamlin will be up front at Daytona.

Joey Logano ($26.25) has been the most consistent driver at Daytona the last two seasons. He has a series-high 7.8 average finishing position and the third-best driver rating (94.7) at the track. Logano has finished four of the last five races at Daytona in the top six, including a win in the 2015 Daytona 500. The No. 22 car is one of the safest picks for your team this week.

Kurt Busch ($20.50) won the Daytona 500 and he should be up front again this week. What was amazing about the win for Busch is that he did it without a rearview mirror in the car. That had to be incredibly difficult. Busch has been consistent at Daytona. He has finished four of the last five races at the track in the top 10 and Busch has completed 21 consecutive races at the track without an accident. The best way to be a great fantasy pick at Daytona is to stay out of trouble and that is what Busch will do for your team this week.

Austin Dillon ($21.00) is very good on the restrictor-plate tracks. Maybe it is the No. 3 car or maybe he learned something from his grandfather that Dale Earnhardt Sr. taught him. Whatever it is, the No. 3 car is very good at running up front at Daytona. Dillon has an average finishing position of 9.9 in his last seven races at the track. He has also completed every lap at Daytona in the No. 3 car. Dillon is a safe pick this week.

Dale Earnhardt Jr. ($20.00) needs a win to secure a playoff spot in his final season in the Monster Energy NASCAR Cup Series. NASCAR has a history of creating storybook endings. Jeff Gordon won at Richmond to secure his spot in the Chase in 2015 and Tony Stewart won at Sonoma to secure his spot in the Chase last year. Earnhardt has been the best driver at Daytona in his career and the race Saturday night gives him the best chance of getting to Victory Lane before the playoffs begin. If Earnhardt does win at Daytona, it may be the biggest party in NASCAR history.

Ryan Blaney ($19.25) almost won the Daytona 500. Blaney was closing in on Kurt Busch at the end of the race but he finished second. Blaney had the second-best driver ranting and the fourth-best average running position in the Daytona 500. The Wood Brothers always bring a fast car to the restrictor-plate tracks. Blaney should run up Saturday night.

Ricky Stenhouse Jr. ($17.25) won the last restrictor-plate race at Talladega and he should be up front at Daytona. Last year Stenhouse qualified fourth and finished fifth in the summer race at Daytona. Fantasy teams should expect another top-10 finish from the No. 17 car this week. Stenhouse will be a good fourth driver for you team this week.

Michael McDowell ($10.25) has had a career season and he should be able to run well Saturday night. He has finished four of the last five races at Daytona in the top 15. That includes a top-10 finish in the Coke Zero 400 last season. McDowell is good at avoiding trouble in the restrictor-plate races and that makes him a good value pick this week.

Here are my pre-qualifying picks for the Coke Zero 400:

* I would really like to see Dale Earnhardt Jr. win this race. I want to see 16 winners this season before the playoffs begin and if Earnhardt can get the job done Saturday night it will really make the race to the playoffs more exciting. We might see Kyle Busch and Joey Logano fight for the last spot if they fail to win a race.  Also I want to see and hear about the party Junior throws if he wins one more race before he retires. I am sure it will be huge with a lot of great moments.