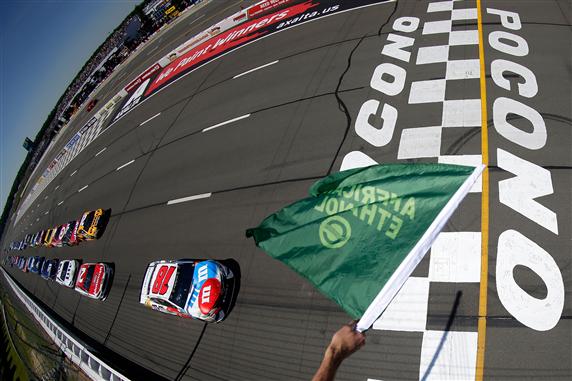 The Monster Energy NASCAR Cup Series travels to Long Pond, Pennsylvania this week for the Overton’s 400. The race can be seen Sunday at 3 p.m. ET on NBC Sports Network. Be sure to test your knowledge of NASCAR by competing in the Fantasy Live game on nascar.com.

Last was a disaster but after looking at all of the scores I am not the only one to have a bad week in Fantasy Live. My picks are currently beating 99.4% of the entries, so I am not too upset.

The NASCAR schedule this week is absurd! I have been dreading this weekend all season. There are two practices Saturday morning and qualifying will be three hours before the race Sunday. I must wait until after qualifying to make my picks and this does not give me a lot of time to analyze the data, make my picks and write my articles. I assure you I will do the best I can to get the picks posted in time for the race Sunday.

Kyle Busch and Martin Truex Jr. have been so dominant in this game that they must be on every team. Strategy #1 will be to use Busch and Truex and pair them with two drivers who can finish both Stages in the top 10. The last driver will be a cheap driver who can earn position differential points. An example of this team is: Kyle Busch, Martin Truex Jr., Kurt Busch, Ryan Blaney, and Matt Dibenedetto.

There should be no problems with qualifying inspection this week since the teams have all morning to make it through technical inspection. If for some reason a driver (like Kyle Larson) struggles in qualifying, I will use Strategy #2. Once again I will use Kyle Busch and Martin Truex Jr. but this time I will pair them with the driver who struggles in qualifying and has a fast car (Kyle Larson) and two cheap drivers. An example of this team is: Kyle Busch, Martin Truex Jr., Kyle Larson, Danica Patrick and David Ragan.

Martin Truex Jr. ($28.00) has been by far the best driver in the Fantasy Live game. He will be the driver who will give Kyle Busch the most competition Sunday. Truex qualified 2nd and finished 6th in the first race at Pocono. The No. 78 car has been fast at every track and there is no reason to believe they will not run up front this week. Truex should qualify in the top five and finish in the top five at the Tricky Triangle.

Kyle Larson ($27.75) has been the best pick in Fantasy Live the last three weeks because the No. 42 team continues to find ways to mess up qualifying and start in the back. Larson is one of the best drivers with the 2017 aero-package and making his way to the front has not been a problem. Larson won Stage 2 and finished seventh in the first race at Pocono. His average finishing position in his seven races at the track is 8.5. Larson should easily finish in the top 10 Sunday.

Kevin Harvick ($27.50) has been one of the most consistent drivers at the Tricky Triangle. He has never won at the track but Harvick has finished four of the last six races at Pocono in the top four, including three finishes in second place. Harvick qualified 12th, had the second-best driver rating (113.7) and finished second in the first race at Pocono. The No. 4 car should finish in the top five Sunday.

Kyle Busch ($27.00) is still looking for his first win and it should come this week at the Pocono. He has been by far the most dominant driver at Pocono and Indianapolis. The No. 18 car led 195 of the 320 laps at the two tracks. He also won the pole for both races. Sooner or later the No. 18 team will find a way to get to Victory Lane. I think this is finally the week the monkey is taken off the back of Busch.

Brad Keselowski ($26.25) ran up front in the first race at Pocono and he should do the same this week. It is no secret that Team Penske has lost some speed they had at the beginning of the season. The No. 2 team relies more on strategy than speed to get Keselowski to the front. Last week Keselowski said his car was junk during the red flag. At the end of the race he was one of the drivers battling for the lead. The same scenario played out in the first race at Pocono. I expect Paul Wolfe and Keselowski to come up with a plan to keep the No. 2 car in the top 10 Sunday.

Erik Jones ($21.50) had his best race of the season in the first race at Pocono. He qualified 15th, led 20 laps and finished third. He also had a fast car last week at the Brickyard 400. This race is all about speed and Furniture Row Racing has it right now. The Tricky Triangle has a habit of producing first time winners (Chris Buescher last year and Ryan Blaney this year). I would not be surprised to see Jones win his first MENCS race at Pocono Sunday.

Kurt Busch ($19.50) has been hard to trust this season but this is the week fantasy players can hitch their wagon to the No. 41 car (trust me he will not crash it). Busch followed up his trip to Victory Lane at the Tricky Triangle in 2016 with a fourth place finish in the first race at Pocono. He qualified fifth, had the fifth best average running position (9.54) and the seventh best driver rating (103.5) in the race. This is one of the best tracks for Busch so it is a good idea to get him in your lineups this week.

Ryan Blaney ($18.00) will be the defending race winner at Pocono. That has to have the young driver fired up for this race. The Wood Brothers know how to get speed out of their cars. Blaney qualified fourth in the first race at the track. I expect the No. 21 car to start up front, lead some laps and finish in the top 10 Sunday.

Chris Buescher ($13.00) is a good pick for Fantasy Live. He usually qualifies outside the top 20 and earns 5-10 position differential points in the race. Buescher won the race at Pocono last year (the race was shortened by fog). He also ran well at Pocono earlier this season. Buescher qualified 29th and finished 19th. He earned the 12th most points in the game. He would be a good fourth driver for your team this week.

Danica Patrick ($10.00) gets no love from the fantasy community but I am not going to ignore her. She has been on quite a roll lately. Since memorial weekend (the official kickoff to summer) Patrick finished 10th at Dover, 16th at Pocono, 17th at Sonoma, 15th at Kentucky, 13th at New Hampshire and 11th last week at Indianapolis. She keeps improving by two spots each week and if the trend continues Patrick should finish in the top 10 Sunday. That is good value from a driver no one wants to use.

Here are my pre-qualifying picks for the Overton’s 400: