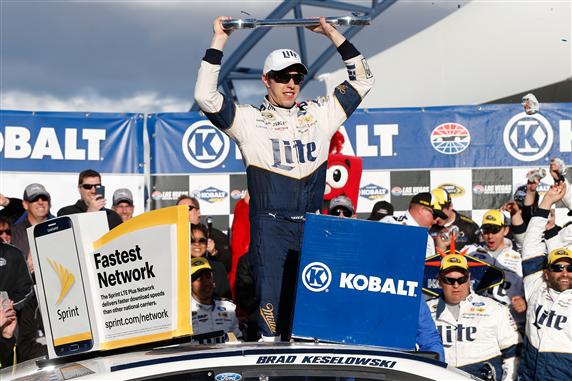 The Monster Energy NASCAR Cup Series travels to Las Vegas, Nevada this week for the Kobalt 400. The race can be seen Sunday at 3:30 p.m. ET on Fox. Be sure to test your knowledge of NASCAR by competing in the Fox Sports Fantasy Auto Racing game.

The race at Atlanta was more indicative of what we will see the rest of the season. So what did I learn from the Folds of Honor Quick Trip 500? The Fords are fast, the Young Guns are ready to make a statement and Hendrick Motorsports must be working with Chip Ganassi Racing now that Stewart-Haas Racing switched to Ford.

Each season one manufacturer dominates the early part of the schedule and the other teams start to catch up eight to 10 races into the season. Chevy was the dominant team in 2015. The Toyotas had the cars to beat in 2016. This year it looks like the Fords have the upper hand. Even the Roush Fenway Racing drivers (Trevor Bayne and Ricky Stenhouse Jr.) ran well last week.

The race at Las Vegas is usually determined by the team that has the best crew chief. The track changes drastically as the tires put rubber down. Usually a setup that works at the beginning of the race will not work at the end of the race. Teams must constantly work on their cars to ensure they rotate in the corners.

Track position is important at Las Vegas but the scoring system for Fox Sports Fantasy Auto Racing game rewards drivers who improve their position in the race more than the drivers who lead the most laps. Each driver earns one point for every position gained in the race, while drivers only earn one point per lap led and one more point for leading the most last. Selecting drivers who start outside the top 10 will be the best strategy this week.

Brad Keselowski ($10,600) will have a good chance to win again this week. Atlanta was one of his worst tracks and now the series competes at a track where Keselowski has won two of the last three races. Crew chief Paul Wolfe is one of the best in the business at making adjustments to the car and putting Keselowski in a position to win the race. That is exactly what happened last week at Atlanta. The Blue Deuce has an average finishing position of third in the last four races in Sin City. Keselowski should be back in Victory Lane Sunday.

Kevin Harvick ($12,800) would be my pick to win but the No. 4 team continues to find ways to beat themselves. Last week he led 293 of the 325 laps but finished ninth. I could see similar results this week. Harvick will have the car to dominate this race, but can he bring it to Victory Lane? He has 24 finishes in second-place since he joined Stewart-Haas Racing. Most fantasy teams will take a second-place finish from the No. 4 team, so he is a good pick Sunday.

Joey Logano ($12,200) will be a serious threat to his teammate (Brad Keselowski) this week. Logano has started three consecutive races on the front row at Las Vegas and has led at least 40 laps in each of them. He was one of the best drivers on the 1.5-mile tracks last year and the No. 22 team should pick up where they left off last season. Logano came close to winning this race in 2016. He will be one of the drivers up front at Las Vegas.

Jimmie Johnson ($11,200) had a lot of bad luck last week at Atlanta. Usually this team does not have two bad weeks in a row. Johnson has a series-high four wins in Sin City but his last trip to Victory Lane came in 2010. It is not like he has run poorly though. Johnson has an average finishing position of 4.25 if you do not count the race in 2015 when he got a flat tire with 31 laps to go. Johnson should bounce back with a solid race this week.

Chase Elliott ($9,500) is the real deal. He has only competed in one race in the Monster Energy NASCAR Cup Series at Las Vegas, but he is a quick learner. Elliott came close to winning the first two races of the season. Maybe the third time is a charm. The No. 24 team is on fire right now and there is no reason to fade Elliott Sunday.

Paul Menard ($7,800) is an off the radar driver who could pay off this week. The No. 27 team always runs well early in the season and Las Vegas is one of his best tracks. His average finishing position in the last six races at the track is 9.8. Not too bad for a driver at his price.

Dale Earnhardt Jr. ($7,200) continues to be underpriced. He has had a lot of bad luck this season but it cannot continue forever. Earnhardt Jr. has the fifth-best average finishing position and the fifth-best driver rating in the last two races at Las Vegas. Last year he started 20th and finished eighth. Fantasy teams should expect similar results from the No. 88 car this week.

Erik Jones ($5,000) may be the best value in the game this week. Jones has the car and the talent to run up front. He has never competed in a Monster Energy NASCAR Cup Series race at Las Vegas but he started second and finished third in the Xfinity Series race in 2016. Jones should easily finish in the top 15 Sunday.

Ty Dillon ($5,000) has never competed in a Monster Energy NASCAR Cup Series race at Las Vegas but he has four starts at the track in the Xfinity Series. Dillon has an average finishing position of 9.2 in those races. Last week Dillon qualified 26th and finished 15th. If he can run a similar race this week he will be a good pick for your fantasy team.

Here are my pre-qualifying picks for the Kobolt 400: