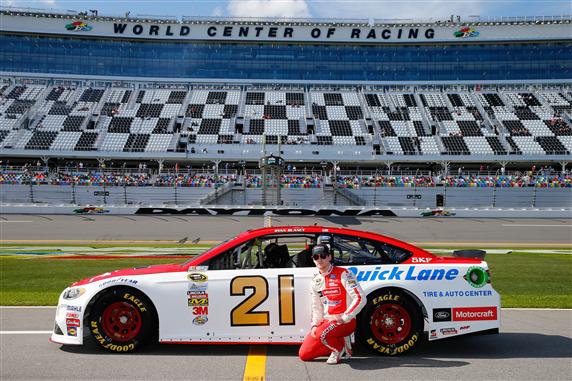 The 2017 NASCAR season is right around the corner. In order to get fantasy teams ready for the new season I decided to recap the 2016 season for my top 30 drivers and preview how I think they will perform this year. Each day I will post two driver previews until my No. 1 fantasy driver is revealed. I will continue my rankings with a driver who has a lot of talent, Ricky Stenhouse Jr.

2016 RECAP: Ryan Blaney had an outstanding rookie season and he would have won the Rookie of the Year award if he did not have to compete against Chase Elliott. Blaney did not win a race in 2016 but he had three finishes in the top five (Kansas, Michigan and Chicago) and nine finishes in the top 10. Blaney only led 11 laps during the season but he did have a respectable 14.9 average finishing position. Blaney has a lot to build upon after a solid rookie season.

Blaney was a good driver in Fantasy Live early in the 2016 season. His price was low enough that he could be used as your fourth driver and still be able to have three studs filling your team. As the season went on and he started to pile up top-15 finishes, his price began to increase. This made it harder to fit Blaney into your lineup.

Blaney was one of the most used drivers in the Yahoo Fantasy game. He was placed into Group C and was the only valuable option other than Chase Elliott, until Alex Bowman came along. Blaney was best used on the 1.5-mile and 2-mile tracks in 2016 and the horsepower of the Team Penske engines should make him valuable in 2017.

2017 PREVIEW: Will Blaney have a sophomore slump? I doubt it. Everything remains the same with the No. 21 Wood Brothers Racing Ford. Jeremy Bullins will once again serve as the crew chief and MotorCraft will serve as the primary sponsor. The only change will be the addition of Stewart-Haas Racing to the Ford family. I think the addition of SHR will help the Ford cars more than it will push Team Penske / Wood Brothers Racing down the pecking order of the manufacturer.

Blaney was placed in Group B in the Yahoo Fantasy game. He will probably be the eighth or ninth best driver in the group (behind Kurt Busch, Chase Elliott, Kyle Larson, Austin Dillon, Ryan Newman, Kasey Kahne, Clint Bowyer and Jamie McMurray) so he will not be as popular as he was last year. It will be smart to use him at the Superspeedways and the two-mile ovals (Michigan and Auto Club). He typically runs well at those tracks.