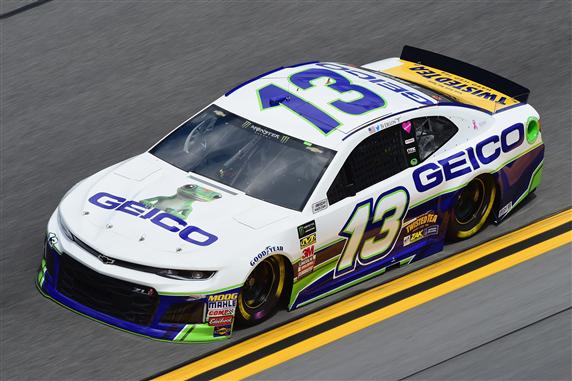 2018 RECAP: Ty Dillon has competed in the Cup Series for two full seasons and he is not showing any improvement. After finishing 24th in the point standings in 2017, Dillon was only able to finish 27th in 2018. He has competed in 90 races in the Cup Series and he only has one finish in the top 10 (Daytona last year). His average starting position in 2018 was 27.2 and his average finishing position was 24.1. Both are four spots worse than his rookie season. To say 2018 was a disappointing season for Dillon is an understatement. (Ty Dillon ranked 30th in fantasy points scored in 2018)

2019 Preview: After a very poor 2018 season, Germain Racing will probably be making some major changes to the team, right? That is not the case. Ty Dillon will return to the No. 13 car, Matt Borland will once again serve as the crew chief, GEICO signed a multi-year deal to sponsor the car and the team will have an alliance with Richard Childress Racing. I was surprised Dillon did not move to the open seat at RCR after Ryan Newman left for Roush-Fenway Racing. I know he is under contract with Germain Racing, but I am sure his grandfather (Richard Childress) could have got him out of it. Dillon does not have the talent to overcome a slow car, so I expect another disappointing season for the No. 13 team.

Ty Dillon was not very good on the intermediate tracks in 2018. This had a lot to do with the speed of the cars he was driving at Germain Racing. Dillon had an average starting position of 27th and an average finishing position of 25th at these tracks. He did have one good race at Texas. He qualified 23rd and finished 13th. If he could get back to where he was in 2017, he will have “some” value in DFS and games that award position differential points if he continues to qualify poorly. (Ty Dillon ranked 30th in fantasy points scored on the intermediate tracks in 2018)

The best tracks for Ty Dillon have been the Superspeedways (Daytona and Talladega). Last year Dillon finished 15th in both races at Talladega and 6th in the summer race at Daytona. He has finished in the top 16 in seven of the last eight restrictor-plate races. That is not too bad. Dillon will have a lot of value in DFS at the Superspeedways because of his cheap price. He will be a good option in the Driver Group Game as well. If you plan to use Dillon in the One & Done game, I would recommend using him in the summer race at Daytona. He has an 11th place average finishing position in that race. (Ty Dillon ranked 18th in fantasy points scored on the Superspeedways in 2018)

Ty Dillon had some success at the flat tracks (Phoenix, Richmond, Martinsville and Loudon) in 2018. He finished 19th and 30th at Phoenix, 20th and 28th at Richmond, 15th and 22nd at Martinsville and 23rd at Loudon. The good news for fantasy owners is that Dillon scored place differential points in six of the seven flat track races in 2019. His value at these tracks depends on how he qualifies. If Dillon starts outside the top 25, he will be a good value pick in games which award place differential points. Dillon is good enough to finish 20th -22nd consistently at these tracks and that is not too bad if his price is cheap in salary cap games. (Ty Dillon ranked 25th in fantasy points scored on the flat tracks in 2018)

There are better choices for your fantasy team at the Road Courses than Ty Dillon. He has not been horrible, but he has not been very good either. Dillon has competed in five races on the Road Courses in the Cup Series. His average starting position is 27.2 and his average finishing position is 25.8. I would not play Dillon at a Road Course unless he starts in the last two rows of the race and the game awards place differential points. (Ty Dillon ranked 30th in fantasy points scored on the road courses in 2018)