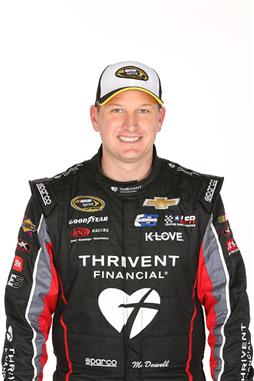 2017 RECAP: Michael McDowell was one of the best cheap drivers in salary cap games in 2017. His average finishing position was 22.2 and he ranked as the 28th best fantasy driver. He scored his first career top-five finish at Daytona in July. The race was his only top-10 finish of the season but McDowell was able to finish inside the top 20 in 14 races last year. He ended the season strong with an average finishing position of 20.3 in the last six races. Not bad for a driver at his price in salary cap games.

2018 Preview: There will be a lot of changes in 2018 for Michael McDowell. He left Leavine Family Racing and joined Front Row Motorsports. Last year he drove a Chevy with Richard Childress Racing Engines and now he will pilot a Ford with Roush Yates Engines. His new crew chief will be Seth Barbour. He was the crew chief with Landon Cassill last year.

The change of teams will NOT be a positive for McDowell’s fantasy value in 2018. The No. 95 car that he drove last year was not far behind the top teams in speed on the race track. McDowell will be farther behind in the No. 34 car this season because the team does not have the resources that his previous team had. I still expect him to perform well on the Superspeedways, small tracks and the road courses. McDowell will have a lot of value in Fantasy Live and DraftKings as long as his salary remains low.

Michael McDowell was a good value on the Intermediate tracks (1.5-mile and 2-mile ovals) last year. His cars lacked the speed to qualify in the top 20 but he had the skill to finish five of these races inside the top 20. McDowell ranked 28th in fantasy vale on these tracks but it would have been a lot higher if he did not have some mechanical issues in some of the races.

I expect much of the same from McDowell in 2018. He should qualify outside the top 25 and finish 5-8 spots ahead of where he starts the race. He can be considered in Fantasy Live and DraftKings as long as his salary in low enough.

Michael McDowell got off to a slow start on the flat tracks (Phoenix, Martinsville, Richmond and Loudon) last year but finished strong at these tracks. McDowell finished 16th in the second race at Richmond, 19th in the second race at Martinsville and 22nd in the November race at Phoenix. McDowell ranked 29th in fantasy value on these tracks but it would have been much higher if he would have started the season as strong as he finished.

McDowell is a Phoenix native and he always runs well at his home track. I would also consider him at Martinsville. He has been pretty good at bringing his car home with all four fenders at the paperclip track. McDowell should have similar results at the flat tracks in 2018 as he had last year.

Michael McDowell is a lot better at Dover then he is at Bristol. The Monster Mile ranks as the 4th best track for McDowell. He has finished two of the last three races at the track in the top 20. McDowell ranked 27th on the steep tracks (Bristol, Dover and Darlington) in 2017. The switch to Front Row Motorsports could cause him to take a slight dip in fantasy value at these tracks in 2018. His new team is not as good as Leavine Family Racing on the steep tracks. He should still have some value if he qualifies outside the top 25 in games that award position differential points.

Michael McDowell is one of the best sleeper picks on the road courses (Sonoma and Watkins Glen). McDowell ranked 23rd in fantasy value on these tracks last year. He has three consecutive finishes in the top 20 at Watkins Glen. The track ranks as his 2nd best track. He is decent at Sonoma too. McDowell qualified 16th and finished 14th in Wine Country last year. A driver’s skill behind the wheel determines a driver’s success at the road course. A switch to a new team should not hurt his fantasy value much on these two tracks. I expect McDowell to be one of the top sleeper picks each time the series races on a road course.