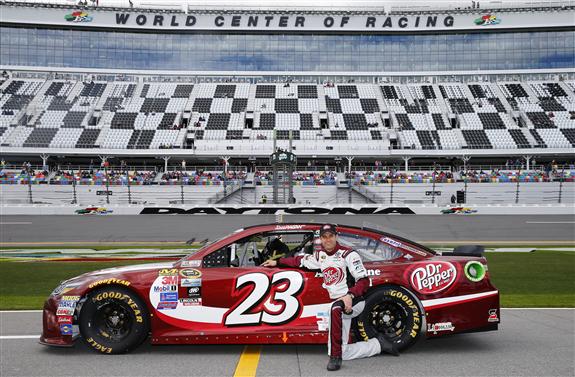 2017 RECAP: David Ragan did not have much value in Fantasy NASCAR in 2017. The only games in which he was useful was in the Yahoo Fantasy Auto Racing game on the restrictor-plate tracks and in DraftKings when his price was low. Ragan had three finishes in the top 10 last year and all of them came at the Superspeedways. He finished 10th in both races at Talladega and 6th in the July race at Daytona. Ragan had an average finishing position of 24.9 in the 36 races. Most fantasy players got what they expected from Ragan in 2017… finishes just inside the top 25.

David Ragan will not have much value on the Intermediate Tracks this season (1.5-mile and 2-mile oval tracks). Last year he ranked 32nd in fantasy value on these tracks and I predict he will be about the same. Ragan has the talent to run in the top 20 but he does not have the car. Races on the intermediate tracks are won by the cars with the most speed and downforce. Front Row Motorsports does not have the resources to produce the speed and downforce needed to run in the top 15 at these tracks. Ragan will have some value in DraftKings at these tracks as a 6th driver for your lineup.

David Ragan will have a lot of value on the Superspeedways (Daytona and Talladega). Last year he scored he ranked 8th in fantasy value at these tracks. Ragan was able to finish 3 of the 4 races in the top 10 and had an average finishing position of 12.75. He won a lot of people money in DraftKings because Ragan started most of the races outside the top 25 and finished inside the top 10. Ragan should be one of the drivers you consider for your fantasy team every time the series competes at Daytona or Talladega.

Usually David Ragan is pretty good on the short flat tracks (Phoenix, Martinsville, Richmond and Martinsville). That was not the case last year. Ragan ranked 31st in fantasy value at these tracks. His average running position was 28th and his average finishing position was 30th. Front Row Motorsports does not have the cars to compete up front at these tracks. I expect Ragan to qualify and finish outside the top 25 in these races in 2018. Matt Dibenedetto would be a better option for your team at a similar price tag.

David Ragan was decent but not great on the steep tracks in 2017 (Bristol, Dover and Darlington). Ragan ranked 26th in fantasy value at these tracks. He ran well in the second race at Bristol (finished 17th) and the second race at Dover (finished 21st). Ragan will have value in Fantasy Live and DraftKings at these tracks because of his cheap price and his ability to finish 8-10 spots higher then where he starts the race. I would not recommend him in any other games though.

David Ragan does not have much skill as a road course racer. Last year he was a driver in the way of the faster cars. Ragan ranked 31st in fantasy value at Sonoma and Watkins Glen. He did not finish either race inside the top 25. Sonoma ranks as his worst track and he is not much better at Watkins Glen. I would recommend finding more skilled road course drivers for your team in these two races.