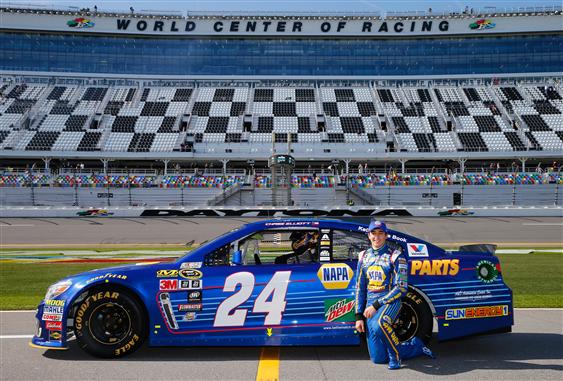 2017 RECAP: It is hard to believe that Chase Elliott has not won a race yet in the MENCS. He has come very close but has not been able to seal the deal yet. Elliott was the best driver for Hendrick Motorsports last year. He had 22 finishes in the top 10 and 12 finishes in the top five. Elliott ranked 4th in fantasy value and finished 5th in the NASCAR point standings. He was one of the most consistent drivers for your fantasy team.

2018 Preview: The only change for Chase Elliott in 2018 will be the number on his car. Elliott will drive the No. 9 car this year, the same number his father made famous in the sport. Everything else will be the same with the team. I would be shocked if Elliott was to finish another season in NASCAR without a win on his resume. I think he will find his way to Victory Lane multiple times this year and be one of the best values for your fantasy team.

Chase Elliott is my pick to win the Daytona 500. No crew chief has been able to set up cars for Daytona as well as Alan Gustafson. His cars have won the pole for the last three Daytona 500s and three of the last four Superspeedway races. Elliott had the best average running position in the four races at the Superspeedways last year, but his results do not reflect how good he was. He will be a great pick for games that do not award position differential points because he usually starts on the front row.

Chase Elliott was good but not great at the Flat tracks (Phoenix, Richmond, Martinsville and Loudon) in 2017. He finished 2nd and 12th at Phoenix, 10th and 24th at Richmond, 3rd and 27th at Martinsville and 11th in both races at Loudon. He will need to be more consistent at these tracks in order to have more fantasy value. I would still consider Elliott for your team at Phoenix. It is one of his best tracks.

The only Steep track (Bristol, Dover and Darlington) I would consider Chase Elliott for is Dover. I predict he will win the race at the Monster Mile this spring. Elliott has never finished outside the top five at the track. His average running position is 3.8 and his average finishing position is 3.25 in his four races at the track. Elliott must be on your team at Dover but I think there is better value for your team at Bristol and Darlington.

Chase Elliott is still learning how to navigate the Road Courses (Sonoma and Watkins Glen). Elliott ranked 10th in fantasy value at these two tracks last year. He only has one finish in the top 10 in his four starts at the tracks. There are better drivers for your fantasy team when the series competes on the Road Courses.