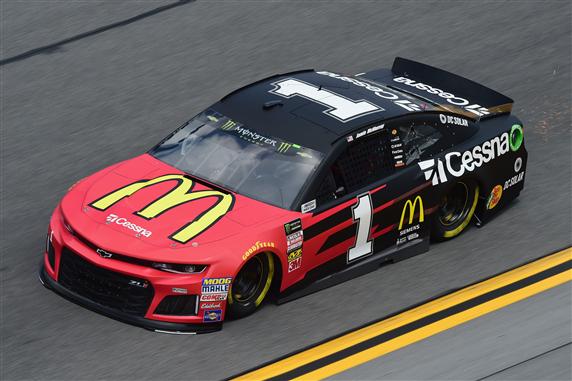 2018 RECAP: Kurt Busch took until late December of 2017 to resign with Stewart-Haas Racing. It was a good decision for him. He had one of his best seasons in the Cup Series since his championship season in 2004. Busch won at Bristol, finished six races in the top five (17% of the races), 22 races in the top 10 (61% of the races) and led 644 laps. No driver in the Cup Series was better at qualifying then Busch. He led the series with five poles. Those extra bonus points really helped your fantasy team in the Driver Group Game. Busch finished 7th in the point standings and will look to make it to the final four for the first time in 2019. (Kurt Busch ranked 6th in fantasy points scored in 2018)

2019 Preview: Kurt Busch continues to bet on his skills as a driver. For the second straight season, Busch was a free agent. This time he left Stewart-Haas Racing to drive the No. 1 car for Chip Ganassi Racing. It is a one-year deal so his chances of returning in 2020 will depend on how he does this season. Busch brought Monster Energy with him to be the primary sponsor for the No. 1 car. Matt McCall will serve as the crew chief and the team will have an alliance with Hendrick Motorsports.

Busch has always been able to get the most out of his cars. He has now driven for Roush-Fenway Racing, Team Penske Racing, Phoenix Racing, Furniture Row Racing, Stewart-Haas Racing and Chip Ganassi Racing. Each time he climbs into the car, the team improves from where they were before Busch joined the team. I think that will be the case in 2019. Busch should be able to work well with his teammate, Kyle Larson. The two will make the playoffs and be a factor at every type of racetrack this season.

Kurt Busch was one of the best drivers in the Cup Series at the intermediate tracks in 2019. He finished seven of the 11 races on the 1.5-mile tracks in the top 10. His best tracks are Atlanta and Michigan. I predict a driver from Chip Ganassi Racing will win at Michigan since Kyle Larson runs so well in the Irish Hills too. Busch and Larson should be great fantasy picks on the 2-mile ovals (Auto Club and Michigan). (Kurt Busch ranked 8th in fantasy points scored on the intermediate tracks in 2018)

Kurt Busch won the 2017 Daytona 500 but that does not make him a great fantasy pick at the track. Daytona ranks as the second-worst track for Busch. Since his trip to Victory Lane, Busch has finished 37th, 26th and 28th at Daytona. He is a much better pick at Talladega. Busch has finished five of his last seven races at Talladega in the top 10. I would save his allocations in the Driver Group Game for the shorter tracks. He is worth a chance in Daily Fantasy Sports (DFS) if he qualifies outside the top 20.  (Kurt Busch ranked 5th in fantasy points scored on the Superspeedways in 2018)

Kurt Busch does not have much value on the flat tracks (Phoenix, Richmond, Martinsville and Loudon) in 2019. Phoenix is one of the worst tracks for Busch. His average finishing position in his last four races in the desert is 22nd. There are better choices for your fantasy team. Busch has only finished one of his last nine races at Martinsville in the top 10. You can do better than that with your fantasy team. Busch has three wins at Loudon and two wins at Richmond. He is worth a look at these two tracks but I think his price will be too high in DFS to justify the risk he has at the Magic Mile and Richmond. (Kurt Busch ranked 8th in fantasy points scored on the flat tracks in 2018)

The Busch Brothers have always been considered two of the best drivers on the steep tracks. They grew up racing on the Bullring in Las Vegas and it has translated into a lot of success in the Cup Series. Kurt Busch won at Bristol last year. It was his 6th trip to Victory Lane in Thunder Valley. He should be highly considered for your fantasy team when the Cup Series competes at Bristol this season. Busch had a lot of success at Dover last year. He finished 5th in both races at the Monster Mile. Busch will be a good fantasy pick at Dover in 2019. The second-best track for Busch is Darlington. He has finished three of his last four races at the Track Too Tough to Tame in the top six. He should have success at the Lady in Black again this season. (Kurt Busch ranked 9th in fantasy points scored on the steep tracks in 2018)

Kurt Busch is one of the best road course drivers in the sport. His average finishing position at Sonoma since 2011 is 5.6. No driver in the Cup Series is better. His average finishing position since 2013 at Watkins Glen is 7.1. The only driver who is better is his brother. Last year Busch won the pole for the inaugural Roval race at Charlotte. He led seven laps and finished 5th. Busch should be at the top of your list of drivers whenever the Cup Series competes on the road courses in 2019. (Kurt Busch ranked 3rd in fantasy points scored on the road courses in 2018)