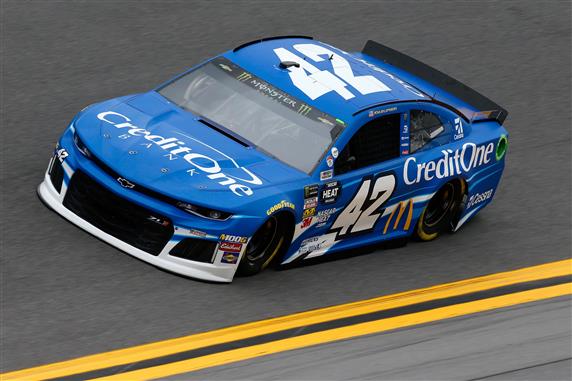 2019 RECAP: Kyle Larson was the ultimate “Feast or Famine” driver in the Cup Series. He won the race at Dover and won the All-Star Race at Charlotte. He also had 17 finishes in the top 10 and scored a pole at Sonoma. The eight DNFs (Did Not Finish) were second-most in the Cup Series behind Reed Sorenson. Larson was still able to finish sixth in the NASCAR Points Standings but he said that his chances of winning a championship would have been excellent if he entered the playoffs with more playoff points.

Larson told reporters at Homestead last year that he learned more in 2019 than he has in his previous five seasons in the Cup Series. This had a lot to do with his teammate Kurt Busch being added to the Chip Ganassi team. Larson said, “My strategy for each race was to move around the track and search for grip. Kurt taught me that working with my crew chief to have a better setup could gain more speed than by trying to find it on my own.” I expect Larson to continue to be one of the best fantasy picks in 2020. He just needs to cut down on the DFS and get better at providing feedback to his team.

2020 Preview: This is the final season for Kyle Larson’s contract with Chip Ganassi Racing. It is no secret that his team wants him to stay in the No. 42 car but Larson will receive a lot of pressure from Mr. Hendricks to fill the empty seat in the No. 48 car and by Tony Stewart to join his fleet of Fords. Larson has already made it clear that the team he signs with must be able to let him drive dirt track races whenever he has the time. Stewart will meet this request for sure. Will Mr. Hendricks do the same? We will find out in the fall.

Larson is the master of the worn out tracks and any track where you must race up against the wall. Homestead and Darlington are his two best but do not forget about him at Atlanta, Michigan and Chicago. If Larson is going to win a race in 2020, it should be at one of these tracks. Larson will have the most fantasy value in the Driver Group Game since he was placed into Group B. Use your allocations wisely with him in that game.

Kyle Larson was a good fantasy pick at the Intermediate tracks when he was able to finish the race. That was the problem. Larson failed to finish the races at Texas (crash), Charlotte (crash) and Homestead (engine). He was really good at Atlanta (lead 142 laps) and Chicago (finished 2nd) because these tracks require a drive to search the track for grip and no driver is better at it than Larson. He was once again good at Michigan (finished 3rd) because of his ability to run against the wall. Larson is a good pick for both season long games (Fantasy Live and the Driver Group Game) and DFS (Daily Fantasy Sports) at these tracks in 2020. (Kyle Larson ranked 9th in fantasy points scored on the Intermediate Tracks in 2019)

Many people think Kyle Larson missed his opportunity to win a championship because the final race of the season has been moved from Homestead to Phoenix. That may not be the case. Larson was good last year at ISM Raceway (Phoenix). He finished sixth in the spring and fourth in November. He also has a win at Richmond (2017) so do not forget about him at that track. Larson has no fantasy value at Martinsville and Loudon. Those are two of his worst tracks and there are better drivers for your fantasy team. (Kyle Larson ranked 11th in fantasy points scored on the Flat Tracks in 2019)

Kyle Larson is at his best at the Steep tracks. He won the fall race at Dover, finished sixth at Bristol and second at Darlington. Larson should be in all fantasy lineups at Dover and Darlington. These are two of his best tracks. He will also have a lot of value in DFS because of his ability to qualify up front and lead laps at these tracks. Be sure to save your allocations with Larson in the Driver Group Game for Dover and Darlington. If you use him too much early in the season, you will regret it once the tracks get hot and slick. (Kyle Larson ranked 2nd in fantasy points scored on the Steep Tracks in 2019)

Kyle Larson is not the first driver that comes to mind when it comes to Road Course racing but he must be on all Fantasy Live and Driver Group Game teams at Sonoma. He is the master at qualifying at his home track. Larson has won the pole for the last three races at Sonoma and he has never qualified outside the top five. Do not use him in the race, but make sure he is your pick to win the pole. There are better picks for your team at Watkins Glen and the Charlotte Roval. He is still trying to figure out these tracks. (Kyle Larson ranked 7th in fantasy points scored on the Road Courses in 2019)