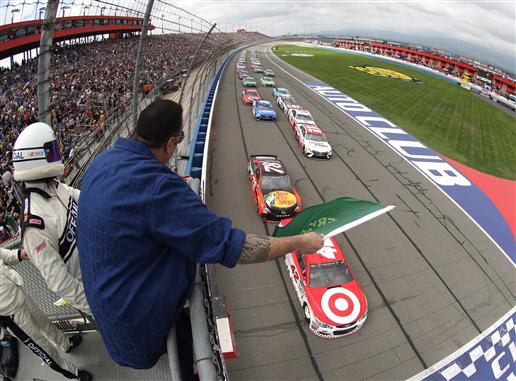 The Monster Energy NASCAR Cup Series will compete in Fontana, California for the Auto Club 400. The race can be seen Sunday at 3:30 p.m. ET on Fox.

Auto Club Speedway is a 2-mile oval track that has about 8 lanes to race on. Drivers who are good at searching the track for the perfect groove for their car usually perform well here. Last year Kyle Larson absolutely dominated the field. He won the pole and led 110 laps on his way to Victory Lane. Here is a recap of the race at Auto Club last year…

My Fantasy Live picks continued to rack up the points in Phoenix. My drivers (Kevin Harvick, Kyle Busch, Denny Hamlin, Chase Elliott, Erik Jones) finished #1, #2, #3, #4, #9 in the race and scored 50 Stage Points, 30 Points for picking Harvick as the winner and 10 points for the winning manufacturer. I backed up a 282 point performance at Las Vegas with 253 points at Phoenix. My picks are currently ranked 216th overall. Let’s keep the hot streak going at Auto Club Speedway.

Kevin Harvick is just too hot to ignore right now. He has won 3 races in a row and there is a good chance he makes it 4 in row Sunday. Harvick has had a lot of success at Auto Club. He received damage to his radiator on lap one last year when Denny Hamlin missed a shift and caused the No. 4 car to run into the back of him. Harvick still finished 13th. He was one of the best drivers at the track in 2015 and 2016. He qualified 2nd in both races and he finished 2nd  in both races. No driver has led more laps the last two seasons at Auto Club than Harvick. I will continue to play the hot hand this week.

Martin Truex Jr. has been overlooked this year because of the hot start by Kevin Harvick and the stong runs from the Fords. Truex is actually the 2nd-best driver in Fantasy NASCAR this season. He finished 5th at Atlanta, 4th at Las Vegas and 5th at Phoenix. Treux qualified 4th, won Stage 1 and finished 4th at Auto Club last year. I expect another top-five finish from the No. 78 car this week.

Kyle Larson considers Auto Club Speedway his personal playground. He is the best in the field at diving to the bottom and sliding to the top to makes passes. Last year he won the pole, led 110 laps and went onto Victory Lane. There are only two tracks on the schedule that are 2-miles in length (Auto Club and Michigan). Larson has won the last four races at these tracks. Since 2016 his average finishing position at the 2-mile ovals is 1.75. I think you have to give Larson a chance this week.

Joey Logano has the best average finishing position at Auto Club over the last three seasons. Logano has finished 7th (2015), 4th (2016) and 5th (2017). Logano is off to a hot start this season. He is currently 4th in the Point Standings. Logano finished 6th at Atlanta and 7th at Las Vegas. I expect another top-10 finish for Logano at his 3rd-best track.

Chase Elliott is likely to be my Garage Driver this week. The Chevy’s have been lacking speed this season but the No. 9 car has been able to keep up with the Fords and Toyotas. Elliottt has the best driver ranking and best average finishing position on the 2-mile ovals over the last two years. So if Elliott shows up with the same speed he has had in the past, it will be good to have him in the garage. If he is slow (I doubt that), we can leave him in the garage and save him for another race.

Finally my Fantrax Bronze Point Salary Cap picks performed as well as expected. Kevin Harvick, Kyle Busch, Kyle Larson, Chase Elliott, Erik Jones and Aric Almirola all finished in the top 10. Having 6 drivers finish in the top 10 is good, but Kyle Larson 18th, Ryan Blaney 16th and Paul Menard 36th killed out team. I am not about ready to start panicking. There is plenty of time to get to the top of our league standings.