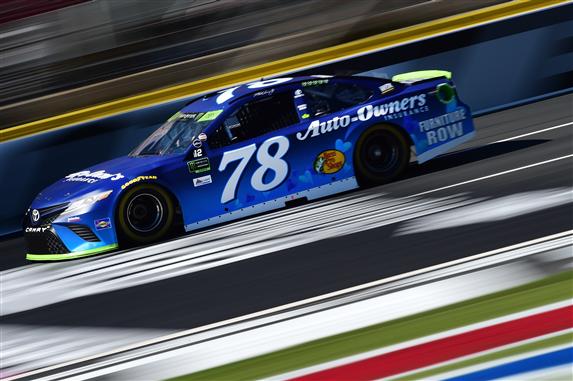 The Monster Energy NASCAR Cup Series will compete at Charlotte Motor Speedway this week for the Coca-Cola 600. This is the longest race of the season and the extra 200 miles makes it tougher to predict. The race can be seen Sunday evening at 6 p.m. ET on Fox.

The MENCS last competed at Charlotte in October of 2017. The race was dominated by Kevin Harvick (sound familiar?). The No. 4 car qualified 3rd, led a race-high 149 laps and won both Stages. Martin Truex Jr. fought a tight racecar during the race. He qualified 17th and the team continued to work on their car. Truex was able to take the lead from Harvick, lead 91 laps and find his way to Victory Lane.

Usually we can use the results from the All-Star Race to predict who will be fast in the Coca-Cola 600. That is not the case this week. NASCAR used a new package with a restrictor-plate on the engines, a huge spoiler in the back of the cars and ducts on the front to manipulate the air. What we saw Saturday night will not be what we will see Sunday.

The racing this week will be the same as what we have seen on the 1.5-mile tracks this season. We can use the results from the last race at Kansas since they are both 1.5-mile tracks. Charlotte Motor Speedway is flatter than Kansas but both tracks require the same aerodynamics. If you stick to the drivers who have been running well on the large ovals this season you should be in good shape for the Coca-Cola 600.

This will not be your ordinary race at a 1.5-mile track. There are 400 laps in the race Sunday night. That means there are 200 points available for fastest laps and 100 points available for leading laps this week. The trend at Charlotte is to have the drivers in the top five score the most fastest laps because clean air really helps their lap times.

We need to treat this race like a short track race because of the amount of laps in the race. Caution flags are way down this season and passing for the lead has not been too common either. I expect two drivers to dominate this race and score tons of points for your DraftKings contest. My strategy will be to select two to three dominators for my lineups Sunday and try to capture as many of the 300 bonus points as possible.

The drivers I expect to be the top dominators this week are: Kevin Harvick, Martin Truex Jr., Kyle Busch and Kyle Larson

The drivers who could be the top value picks for the race Sunday night include: Kurt Busch, Clint Bowyer, Aric Almirola, Erik Jones and Ricky Stenhouse Jr.

The drivers I expect to be the best cheap drivers for the race Sunday night include: Daniel Suarez, William Byron, Kasey Kahne, Chris Buescher and AJ Allmendinger

My Fantasy Live picks are hitting on all cylinders this year. My picks are now ranked 87th overall and beating 99.99% of the entries. My goal is to finish inside the top 100 for my 3rd consecutive season. I would love to win the $10K grand prize for winning this game so I need to keep climbing to make it to the top.

Martin Truex Jr. (6): I still have 6 allocations left with Truex Jr. with 13 races left in the season. That includes two road courses and a race at Daytona (So 6 allocations for 10 races). Truex should get back to dominance this week at his best track. Two years ago he led 392 of the 400 laps in this race. I would be shocked if Truex did not lead some more laps Sunday night.

Kevin Harvick (3): I am down to 3 allocations with Harvick but I do not care. I would have him in my lineup this week if I only had one allocation left. He has dominated the 1.5-mile tracks like we have not seen before. Harvick has finished 1st, 1st, 2nd and 1st, while leading 561 laps this year at these tracks. His average starting position is 2nd so he is a great pick for bonus points for qualifying as well. I plan to use Harvick at Charlotte, Chicago and Kentucky… the three 1.5-mile tracks left in the fantasy season.

Clint Bowyer (7): Bowyer has not finished inside the top 10 at Charlotte in a long time but he has never had cars as fast as the ones he is driving this season. Before his win at Martinsville, the last win for Bowyer came at Charlotte in 2012. Bowyer has consistently been running in the top 10 so I plan to use him until he cools off.

Aric Almirola (9): I sure wish I had Almirola on my team Kansas. He finished in the top 10 and would have been a great allocation saver for your team. I am not making the mistake of leaving the No. 10 car off my team this week. Almirola has been pretty good on the 1.5-mile tracks his season. He finished 13th at Atlanta, 10th at Las Vegas and 9th at Kansas. Almirola is one of the drivers I will be watching closely in practice this week.

I plan to have Kyle Larson (6) in the garage this week. Was his car really that fast at Kansas or was it passing cars like they were sitting still because of the back window being caved in. If Larson has the same speed at Charlotte that he had at Kansas he may be in my starting lineup. I will at least have him in the garage though.

* I would love to use Kyle Busch but I only have 4 allocations with him. Busch has never won at Charlotte and he has terrible luck here. I will save him for the tracks he has a better history at.

My Fantrax Bronze Point Salary Cap picks were running well until Kyle Larson and Ryan Blaney decided to wreck each other. I was still able to climb one spot in my league standings. I will keep the pedal to the metal and try to get us to the top before the end of the season.

I am making another trade this week. It is time to add another Stewart-Haas Racing Ford to my lineup. I am trading Denny Hamlin for Kurt Busch.